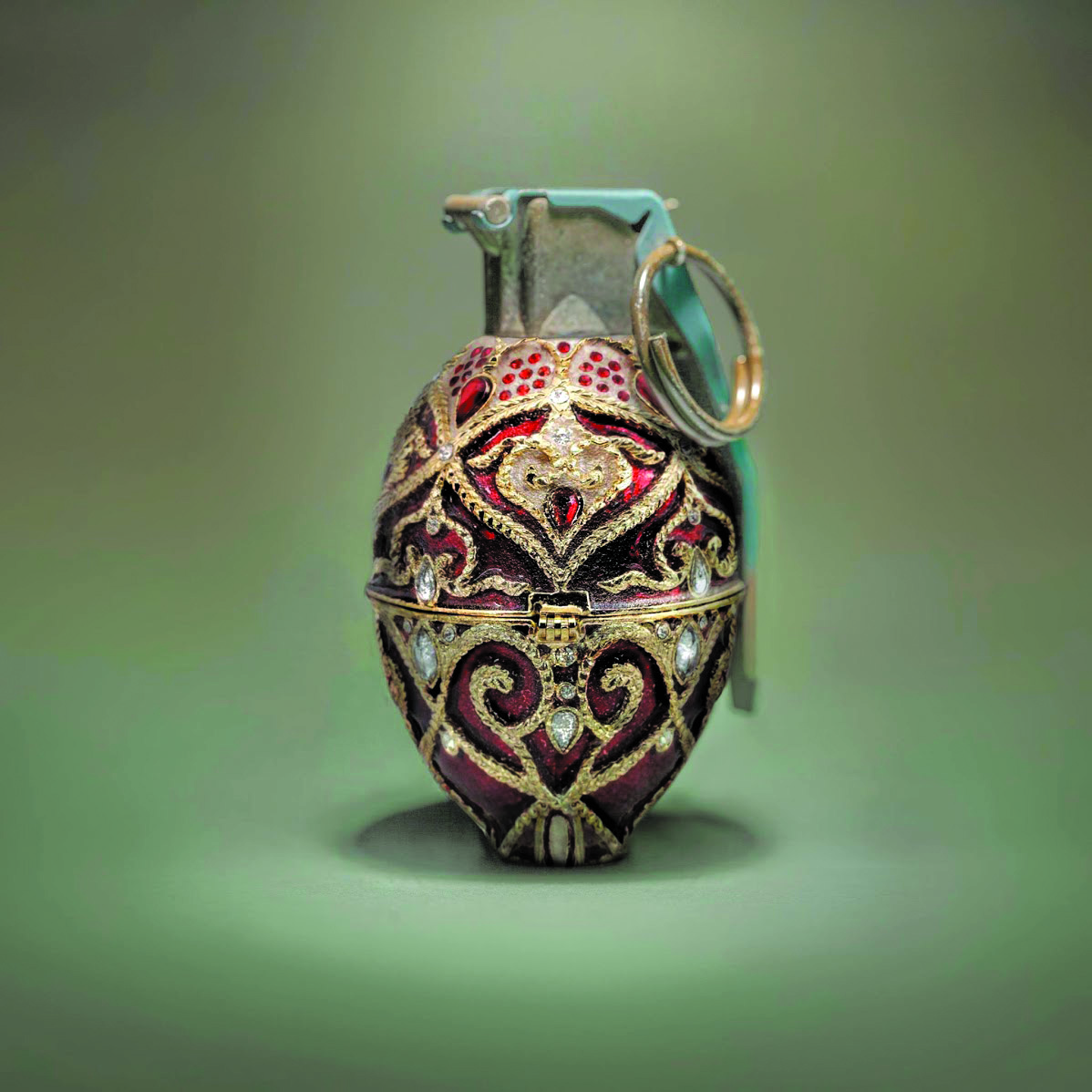 All of the works in Shells are grenades, onto which Krovblit has layered other images, with three different series featuring series of images of three different sorts. One is grenades overlaid with faberge egg patterns, which calls back to World War 1, during which time the faberge egg factories produced grenades.

The idea for this first series is also rooted in the inception of the works in this exhibit, which occurred as Krovblit was working on a past project, during which he crushed items in a vice. As he attempted to put a grenade into the vice, he became afraid of what might happen.

“The grenade was just sitting around his studio, and one day he thought of an egg; an egg, of course, being a source of life, and a grenade being the antithesis of that,” explained gallery assistant Erica Entrop.

The second series features imagery from fine China he received from his grandmother overlaid onto grenades, which Entrop explained also has a historical point of reference: after World War 2, Japan was left with scant resources, and used the means of producing fine ceramics to create grenades.

“This is again a combination of that fragile shell and explosive insides,” said Entrop.

Finally, a third series features recognizable corporate logos with their names changed on another series of grenades; for example, the Shell gasoline logo altered to say Hell, which Entrop explained was in reference to many of these corporations manipulating resources in essentially the shadow of their more friendly public exterior.

“The Real Future,” the other exhibit newly featured in the gallery, was titled so due to the fashion in which Nyboer discovered the subjects of these photos. Maria Guerrero, the gallery’s Assistant Director, explained that on election night, he just happened to stumble upon The Lot, the dance club featured in the photo series, and found their diversity and celebratory spirit to inspire within him a sense of hope for the future.

The Lot is essentially a collective of dancers that will create an impromptu dance space in parking lots in Downtown L.A. with a mobile boombox, and just watch and support each other’s dancing.

“They just start to dance for each other,” Guerrero said. “All of these dancers are professional. Some of them went to school for dance. Some of them are self-taught.”

Guerrero explained that The Lot has a reputation in dance communities, and sometimes dancers visiting L.A. from other areas will visit. Internationally, the community received a lot of notoriety when founder Slim Boogie was featured on the cover of Vogue International.

In order to take these photos, Nyboer had to be accepted into their community, and was even given permission to stand within their circle to take intimate photos of the dancers. He only used natural light to capture the intensity of the dancers and intrude as little as possible.

“It’s almost like a home for everyone,” Guerrero said. “You come into this place of creation and everyone starts to dance.”

For more information on the Lois Lambert gallery and both exhibits, visit loislambertgallery.com.