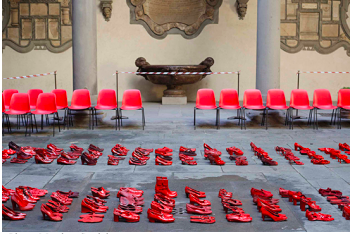 Aeschylus’s The Suppliant Women, one of the oldest surviving dramas from ancient Greece, is the first play and only surviving full text of the lost Danaid Tetralogy. The tetralogy was inspired by the myth of Io and her two warring sons, Aegyptus and Danaos. After Aegyptus usurps Danaos’s throne, the 50 sons of Aegyptus seek to possess the 50 daughters of Danaos by forced marriage. Danaos and his daughters reject the compulsory unions and flee to Argos for sanctuary, pursued by the Egyptians.

Translated by renowned writer and translator George Theodoridis, The Suppliant Women is one of Aeschylus’s most poetic pieces and one of the earliest known stories of refugees. In this timely production at the Villa, Argos is modern Greece and the daughters, wearing life jackets and arriving on overcrowded boats, are Syrian refugees. This ancient play has neither hero, nor downfall, nor even tragic conclusion. Instead, the play’s themes, still pertinent today, explore human rights, the continuing oppression of women, and societal reactions to refugees.

All performances take place in the Villa Auditorium. Tickets are $7 and can be reserved by calling 310-440-7300 or at http://www.getty.edu/museum/programs/performances/theater_lab.html.