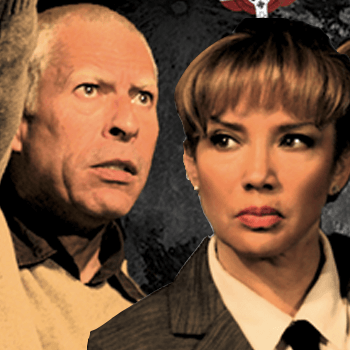 Jeffrey Hatcher’s classy play A Picasso is now playing at the beautiful Promenade Theatre in Santa Monica. I recently attended opening night of the intriguing drama performed all in French by the talented duo of actress/director Natalia Lazarus and actor Charles Fathy – they were both terrific and it was a real treat to see them perform in French. The very special evening was presented in association with Alliance Francaise Los AngeIes.

I first saw the play three years ago in English and loved it. I know un peu Francaise so when the chance to see the beloved play in French came up I enthusiastically RSVP’d with PR Queen Sandra Kuker to attend. There was also a discreet screen with subtitles which helped and it was a great evening. The English version is now on the mainstage and will play until November 11 which I highly recommend you check out – the story is fascinating and the acting is great – Ms. Lazarus and Mr. Fathy are at the top of their game and – tres bien – there will be an encore French performance Nov. 12 to conclude the run so all you French lovers out there RSVP soon! A Picasso also played in Paris last year to great acclaim.

The story takes place in war torn Paris in 1941. Mademoiselle Fischer, a beautiful “cultural attaché” from Berlin has arrested the feisty driven Pablo Picasso because she needs him to authenticate three of his pieces recently confiscated by the Nazis from their Jewish owners for inclusion in a degenerate art show curated by Joseph Goebbles. The show is a great history lesson and a very insightful look at Picasso’s personal life and great work. Visit promenadeplayhouse.com for tickets and more information.