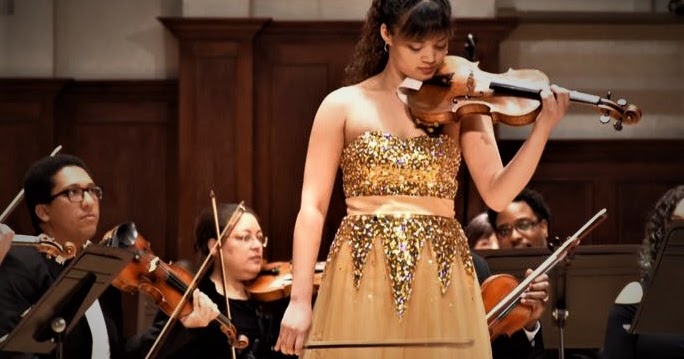 Annelle Gregory performed another American violin concerto, the “Barber Concerto,” for a packed house at SGI Auditorium earlier this year, during the SMS’ 2016-17 concert season. Since then, she has won the top prize at the national Sphinx competition in Detroit and has been touring as a soloist, performing with top orchestras across the country.

She was excited to have returned to perform with the SMS again and especially excited to have been performing this piece, which she discovered accidentally about seven years ago when it happened to be on the same album as something else she had downloaded.

“The beauty of the melodies and the poignancy of the harmonies was striking,” she remarked. “Some of it sounded like a Hollywood film where the hero rides off into the sunset, other parts reminded me of Stravinsky’s “Firebird,” and still other parts sounded like nothing I’d ever heard before. But the whole concerto was amazing and unforgettable, and I promised myself that one day I’d perform it with orchestra.”

The composer of the concerto that Gregory performed, Erich Wolfgang Korngold, was born in Austrian at the turn of the 20th century and came to America in the mid-1930s to write film scores for Hollywood. He composed the scores for famous films starring Errol Flynn and Olivia de Havilland, such as “Captain Blood” and “The Adventures of Robin Hood.” According to SMS Music Director Guido Lamell, Korngold’s “Violin Concerto” is “one of the most beautiful concertos ever written for the violin.”

In addition to the Korngold violin concerto, SMS performed Gioachino Rossini’s overture, “La Gazza Ladra”, also known as “The Thieving Magpie.” Lamell, who is also a violinist for the Los Angeles Philharmonic, describes it as “one of the most fun things I’ve ever played.”