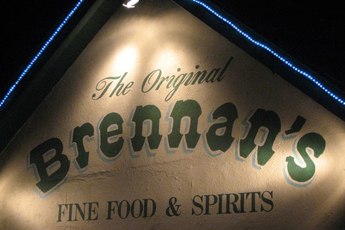 The turtles will soon be back in action at Marina Del Rey’s iconic pub, Brennan’s.  After remodeling the space and giving the 45-year-old bar some TLC, Brennan’s has reopened as of Tuesday, December 19 with new menus, a new look, and the same beloved turtles.

“It is amazing how many people have heard of Brennan’s, no matter what part of the city they live in! The space has always had a certain magnetism that has led to so many memories for each person who has visited,” says Tony Yanow, one of the founders of Artisanal Brewers Collective (ABC) which assumed ownership of Brennan’s earlier this year. “I am so excited to be a part of the team that reinvigorates this local favorite.”

With ABC at the helm, beer will of course be a central focus of the bar program, offering guests an eclectic tap list including 16 rotating beers starting with local brewery El Segundo Citra Pale Ale, California darling Modern Times Critical Band IPA and a Fall favorite, The Bruery’s Autumn Maple. An Irish Dry Stout and an Irish Red Ale will always be available on draft as well. The menu will also include a selection of signature cocktails with some homage to Brennan’s original Irish heritage such as On the Lash, a take on a whiskey sour but made with Jameson Black Barrel Irish Whiskey, St. Germain, lemon juice, simple syrup and cucumber. Don’t forget that heavy Irish whiskey list featured above the beer taps, which includes such marks as The Knot Irish Whiskey, Red Breast Pot Irish Whiskey, Hooligans Irish Whiskey & Ginger and more

Culinary Director Trevor Faris aims to ramp up the bar menu with several unexpected twists that fit with the local vibe of the beach community. Guests can belly up to the bar to order shared items such as Classic Shrimp Cocktail, Smoked Oysters, Mushroom Paté and Chicken Liver Mousse.  Alternatively, guests can order a variety of pizzas, available as non-vegan or vegan, including selections such as Arrabiata made with crushed tomatoes, mozzarella, and spice from a mix of Calabrian and serrano chilies, Potato Leek which tops the crispy crust with potatoes, garlic cream, leeks and pecorino or the plant based Fennel “Sausage”made using spiced Impossible Meat.  Salad, toast and entrée sections round out the menu with items like a Shrimp Roll, Radish Panzanella Salad or Steamed Clams in a white wine and fennel broth.

Ricki Kline Design + Build has given new life to the 2500 square-foot historic space and separate large patio with pops of color, different plaids, stripes and textures, comfortable and gracious seating opportunities, as well as a sparkling new back bar. The venue now encompasses a more open and airy vibe, as well as design additions such as marble bar tops and a double-sided beer display to complement Brennan’s original iconic identity as a classic roadside tavern. The patio will be a central part of the restaurant and bar with new green turtle racing striped seating, and shade provided by two full-grown olive trees and a large wood trellis over outdoor banquette seating.

Those who were drawn to the turtle residents, some of whom have lived at Brennan’s for 20 years, can look forward to seeing them once again upon reopening. Similar to the renovations made to the whole space, the turtles will have an updated and expanded living area and sanctuary encompassing conditions as close to a natural habitat as possible with space to swim, sun and relax in between once-a-month races.

Turtle racing will start again on opening night, and will be held every third Thursday of every month from 9:00 p.m. on.  Guests are encouraged to arrive early to read up on each turtle’s back story and stats before choosing their favorite green racer.  As in the past, proceeds from the races will be donated to local animal protection organizations.