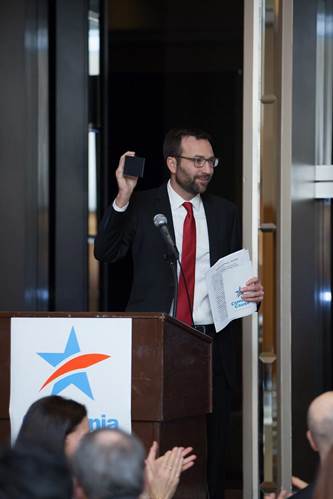 California Common Cause honored State Senator Ben Allen (D – Santa Monica) with its “Democracy Defender” award at its Spotlight on California event, which took place at the Dorothy Chandler Pavilion.

“Senator Ben Allen is a true leader in advancing reforms that create an inclusive democracy,” said California Common Cause Executive Director Kathay Feng. “From limiting the influence of big money special interests to modernizing our elections to spreading redistricting reforms, we could not have achieved these advances without Senator Allen.”

Since taking office in the State Senate in 2015, Senator Allen has quickly made his mark on California elections. As chair of the Senate Elections Commission, he authored SB 450, authorizing counties to adopt the “Vote Center” model, which greatly expands when, where, and how Californians can vote.

Sen. Allen authored and passed SB 1107, which created the conditions for state and local governments to establish public campaign financing to lift the voices of everyday citizens. He also introduced SB 254 –so that voters could instruct our congressional members to overturn theCitizens United Supreme Court decision, which passed as Prop 59. Finally, he led the passage of SB 1108, to authorize all of California’s cities and counties to adopt independent redistricting commissions.

“It’s a great honor to be receiving this award,” said Senator Allen. “I am passionate about improving the transparency of our electoral system and advancing progressive change.  I will continue to champion fair election reform in partnership with Common Cause!”