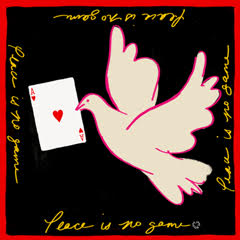 Jewish Women’s Theatre’s first art exhibit of the new year, entitled “Speak Out,” and running fromJanuary 15 to March 5, will feature four artists who use their individual and diverse palettes to speak up for those who have no voice.

Works by Los Angeles artists Pat Berger, Jenny Rubin, Corrie Siegel, and Alexandra Wiesenfeld will be on display in a show assembled by guest curator Georgia Freedman-Harvey. The exhibit will have its official opening and art talk on January 20, at 7 pm, just prior to the premiere performance of JWT’s new salon show, The Accidental Activist.

The gallery show and the performance will each use different art forms to explore how to give voice to the voiceless and how to help the forgotten.  Admission to the art exhibit and talk are free; tickets are required for the performance.

“What does it mean to Speak Out?” asks curator Freedman-Harvey. “Our featured artists, through their art have thoughtfully answered this question. All were willing to take a risk to Speak Out for others, and be the voice for those whose voices have been silenced or never given the opportunity to be heard.  They have made sure the forgotten are not forgotten, either as the result of events in history or for the people living on the edges of society.

Freedman-Harvey and some of the participating artists will delve into the meaning of the works at additional art talks on Monday, January 29 and Tuesday, January 30 at 6:30 pm.

“Each of our artists recognized that we need to act to right a wrong, help the helpless, and find value and hope through words, actions and the lines they draw on paper and silk, showing that all people have value. The artwork in “Speak Out” expresses the unspoken feelings that many of us experience in our splintered world, and acknowledges our need to do something to speak up for those who have become isolated, invisible or sidelined,” Freedman-Harvey explains.

Marilee Tolwin, director of The Gallery@The Braid, is excited to share “Speak Out’s” unique works with visitors.  “One of our primary missions is to bring meaningful and provocative works to our space,” Tolwin says.  “This exhibit, which so beautifully compliments ourAccidental Activist salon show, will hopefully inspire people to not just view the beautiful art, but to act. It asks people to look inside as well as outside to discover what they can do to give voice to those who have none.”

Pat Berger – A worldwide exhibitor and educator, Berger is inspired by nature and committed to the human condition. Reacting to the plight of the homeless in the mid 1980’s, she did a series of paintings called “No Place to Go-Homeless in America.” It received much acclaim, traveled around the country and twelve pieces were purchased by the Karpeles Manuscript Museum in Buffalo, NY and have a room of their own. More information at: www.patberger.com.

Jenny Rubin—Designer Rubin has created a print-centric clothing and accessories line called “Jeri Malone,” in which everything is made locally in limited quantities, with minimal waste and maximum creativity. Her designs seek to influence and brighten the world she lives in, that she believes can be just as fantastical as the unattainable one to which one many of us aspire. More information at: www.jerimalone.com.

Corrie Siegel – A multimedia artist who exhibits nationally and internationally, Siegel uses art to chronicle the lives of distant relatives whose lives were shaped by Russian Cossack oppression and the Nazi occupation. “The actions we take today have irrevocable impacts that shape the future,” she notes. “We must remember that discrimination, hate, and exclusion are imbedded in our culture and that it is our duty to look closely and reshape these patterns.” Visit: www.corriesiegel.com.

Alexandra Wiesenfeld – A storytelling international exhibitor, Wiesenfeld uses art to showcase an insistent and immediate response to the activity of human creatures as they move through the contemporary world.  She connects rationalization, conceptualization, and intellectual thought as she constructs art as a response to what occurs before linear language can be formed or after it has failed. Additional information at:www.alexandrawiesenfeld.com.

“Speak Out” will be on display at The Gallery@The Braid, home of Jewish Women’s Theatre, 2912 Colorado Ave., Suits #102, Santa Monica, CA 90404 from January 15 to March 5.  The first art talk, preceding the premiere performance of The Accidental Activist, will take place on Saturday, January 20 at 6:30 pm.  Additional art talks are Monday, January 29 and Tuesday, January 30 at 6:30 pm. Art talks, featuring the artists and curator are free. Tickets must be purchased for performances.

JWT, recently voted “Best Live Theatre on the Westside” by The Argonaut, stages and displays traditional and contemporary works and educational programming that provide a forum for the development, performance and showcasing of Jewish artistic talent. Now celebrating its 10th Anniversary, JWT’s salon theatre of original dramatic shows, each written to a specific theme, displays the diverse and eclectic community of writers, artists and creators who comprise LA’s Jewish women’s community. Learn more about JWT at: www.jewishwomenstheatre.org.