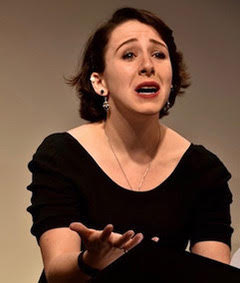 The world is waiting for your voice, so sit back, open your ears and hearts, and head to Jewish Women’s Theatre (JWT) for The Accidental Activist, an evening of inspiration, tears, laughter and valuable life lessons.  JWT’s tenth anniversary salon season begins on January 20 at 8 pm with a brand new, original show that brings audiences untold stories of spunk, pluck, bravery and just plain guts.

Opening night of The Accidental Activist, enacted by a cast of veteran actors, will begin with a reception at JWT‘s home theatre, The Braid at 2912 Colorado Avenue, #102, in Santa Monica. Pre-performance activities also include a new art gallery exhibit “Speak Out” and an art talk, beginning at 6:30 pm.

The Accidental Activist and all of JWT’s salon shows are first performed at The Braid, then travel to homes on the Westside, the Valley, Midtown, and the South Bay until January 30.  For performance times, places and ticket information, visit www.jewishwomenstheatre.org.  All tickets are $40.

“The Accidental Activist is a fitting show to begin our 10th year,” says Ronda Spinak, JWT founder and artistic director.  “Looking back, I realize the hunger people felt in wanting to share their untold stories.  JWT created a safe place for these stories to be told and celebrated. This show continues that tradition.”

During The Accidental Activist, audiences will meet Elaine, a young mother who discovers her adopted son is autistic and starts a nonprofit to help kids,  Libby, a 94 year-old who wasn’t too elderly to lead her fellow tenants to fight back against their greedy landlord, and Janet, whose vegetarian protest led to the loss of her community, which was built around chicken soup.

Other stories focus on a 9/11 survivor’s precarious journey through life and a mother’s determination to ignite a fire of social justice in her young daughter, who would rather have stayed in bed than march against global warming.

“As these stories come to life on stage, I think they will also ignite small fires in everyone who sees them,” says Director Susan Morgenstern.  “We don’t think anyone who comes to this new show will leave the theatre without a spark of conviction to work for change in his or her own way.”

One of the characters in an Accidental Activist story, a lawyer working against human trafficking, suffers a life threatening blow as a result of her work.  Rather than shy away from her cause, she considers her attack to be a gift.  “Have you ever received a gift, disguised as a whisper, a random act, a kindness, an insult, a bump on the road that jostled your plans and shook you at your core?” she asks.

“Come see The Accidental Activist and you will receive this gift as well,” Spinak says.

Theatre guests may also view “Speak Out,” a new art exhibit that echoes the theme of giving voice to those who have none. An opening night reception begins at 6:30 pm with an art talk, featuring guest curator Georgia Friedman-Harvery and contributing artists at 7 pm.  Additional art talks will precede The Accidental Activist performances on Monday, January 29 and Tuesday, January 30 at 6:30 pm. The art gallery and art talks are free; tickets must be purchased for performances.