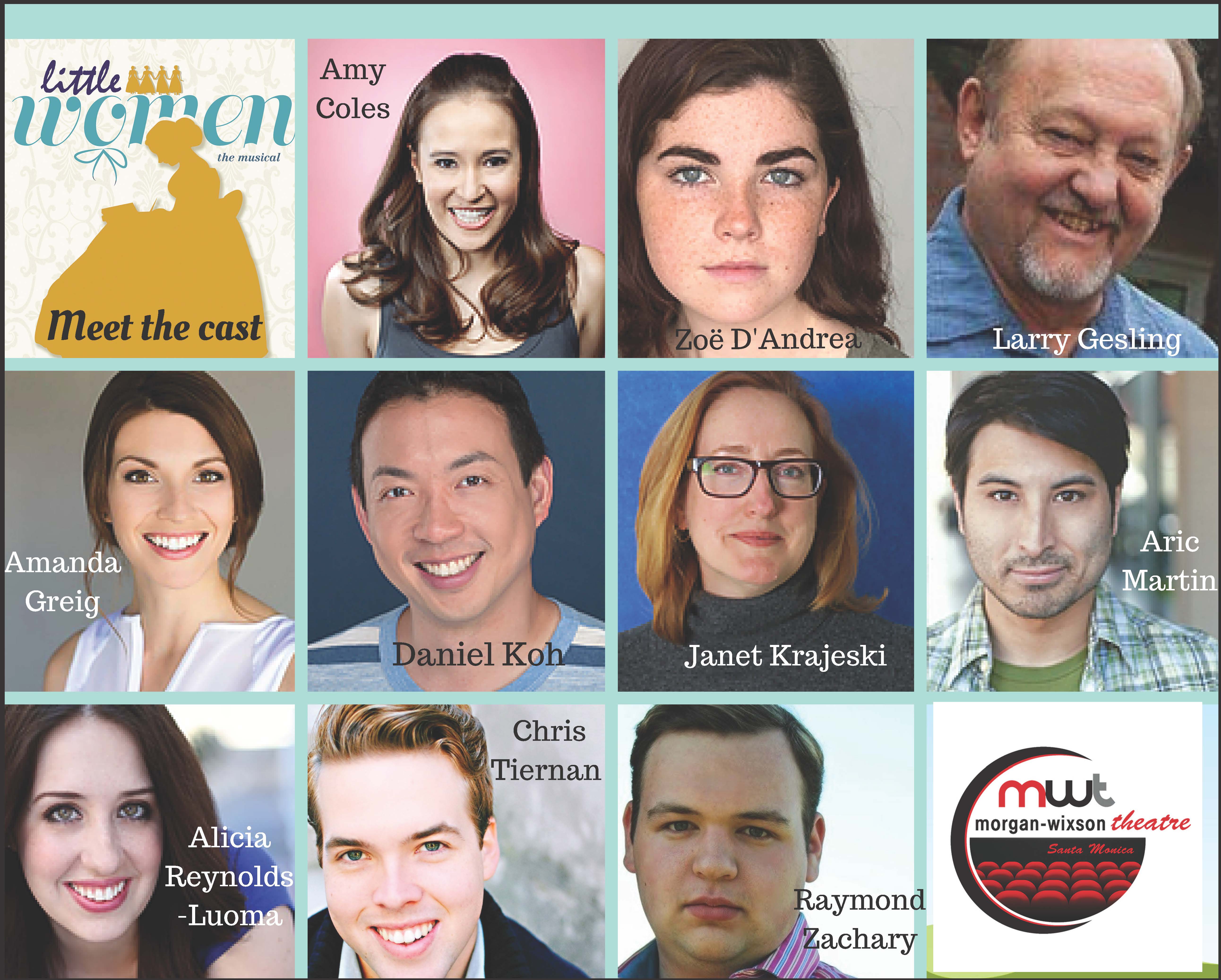 Louisa May Alcott’s beloved novel is celebrating its 150th anniversary this year. The Morgan-Wixson is marking the occasion by presenting the Broadway musical version as part of its Mainstage series.

Little Women follows the adventures of the March sisters — budding author Jo, practical Meg, sweet Beth, and romantic Amy — who are coming of age during the Civil War under the care of their doting mother, Marmee. A touching tale of young love, achieving dreams, and the power of family, this song- filled adaptation is designed for the entire family to enjoy.

Alicia Reynolds-Luoma headlines the cast as Jo March. Alicia has appeared in many productions at the Morgan-Wixson including Seussical, the Musical, and The Addams Family. She considers Jo her dream role, not only because of the timeless story and gorgeous music, but because she personally relates to the character.
“I am also one of four siblings,” Alicia explains. “I was a late-bloomer, headstrong, and always writing.” Jo’s ambition and drive deeply resonate with Alicia. “Jo March inspires me. I feel so humbled to finally have the chance to play one of the most powerful literary icons for women, especially in this crucial time in history.”

The cast features other performers who are familiar to Morgan-Wixson fans. Amanda Greig played Susan in Company last season. Amy Coles has appeared at the Morgan-Wixson as Mayzie in Seussical, Amy in Company, Logainne in The 25th Annual Putnam County Spelling Bee, and Diana in A Chorus Line. Zoë D’Andrea recently appeared as Emilie Cratchit in A Winter’s Tale, Millie in Thoroughly Modern Millie, and Natalie in All Shook Up.

Christopher Tiernan II played the Cat in the Hat in last summer’s production of Seussical, as well as Hunter in Boy/Peter in Peter and the Starcatcher, and Chad in All Shook Up. He also played Robert Martin in The Drowsy Chaperone at Torrance Theater Company. Larry Gesling has appeared in numerous shows over his past 30 years with the Morgan-Wixson, recently Larry in Company, St. Clair in Glorious! and Jim in All Shook Up.

Some of Daniel Koh’s favorite Morgan-Wixson roles were Mr. Mayor in Seussical, and Captain Scott in Peter and the Starcatcher. He has also played Abel in Children of
Eden at New Works New Haven, The Madam / British Admiral in Pacific Overtures at the
Chromolume Theater, and Mike/Oliver/Ryan in The Theory of Relativity at the Charles Stewart Howard Playhouse.

Aric Martin has appeared in numerous MWT shows including Peter and the Starcatcher as Black Stache, The Addams Family as Gomez, and Avenue Q as Princeton/Rod.

Raymond Zachary is making his debut on the Morgan-Wixson stage. His favorite past roles include Edna Turnblad in Hairspray at Golden West College and Munchkin Mayor in Christmas in The Land of Oz at the Huntington Beach Playhouse.

The production will be located at Morgan-Wixson Theatre, 2627 Pico Boulevard, Santa Monica 90405, and will last from March 17 to April 14, 2018. Audience Q&A’s are to be held immediately following the performances on March 23 and April 1.

Showtimes are Fridays and Saturdays at 8 p.m., and Sundays at 2 p.m. Reserved seats are available at www.morgan-wixson.org or by phone at 310-828-7519 or by email at mwtboxoffice@gmail.com. Adults $28, Students and Seniors $23.