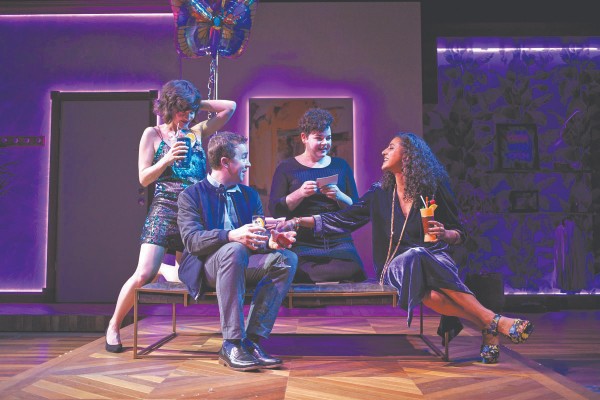 “Your wedding is my funeral.” 29-year-old Jordan Berman (Will Von Vogt) a single gay man, speaks those emotional words at the nuptial festivities of his forever pal, Laura (Melanie Field). She is not only one of the three young women who formed their inseparable clique, she and Jordan once lived together and enjoyed a special relationship. During a playful conversation, where they fantasized about how things would work if they became a couple, “turkey baster” was Jordan’s comedic response to making a baby.

Beautifully written by Joshua Harmon (“Bad Jews”) and skillfully directed by Brooklynite Stephen Brackett, the story takes us through the evolving lives of a quartet of single young friends – Jordan, Laura, Vanessa (Vella Lovell) and Kiki (Keilly McQuail) whose opening funny monologue about loving herself, sets the tone for the amusing moments that would ensue. These bosom buddies share their dating experiences and Jordan confesses that he has a crush on Will, a co-worker, played by John Garet Stoker, who, along with Preston Martin, and with the help of wigs and fake facial hair, convincingly climb into the skins of their multiple characters. To the playwright’s credit, he avoided that slippery slope of blurring the lines between theatrical and sitcom and keeps the laughs coming on the heels of the last one. In one scene, future the quartet is at a wedding with Vanessa commenting: “Have you ever been to a wedding? They’re not fun.”

To the director’s credit, each of the female characters is fully fleshed out with not a “cookie cutter” characterization in sight. Each of their performances is spot-on with the more comedic moments given to Keilly McQuail as Kiki, who is in a state of constant inebriation, which results in difficulty navigating her way around in her mega high heels. However, the Jordan character is the pivotal one around which the others rotate and Will Von Vogt delivers an extraordinary performance of sheer perfection, as he takes us through his underlying sadness and a trunk load of feelings of inadequacies. Now, Jordan is still obsessing over Will, and after noticing him reading a book about World War II, works up the courage to invite him to a documentary on the Franco-Prussian War and Will accepts. Sadly, the date is un-eventful and leaves Jordan feeling disappointed. He composes a sentimental email to Will professing his deep desire to be with him. Two of the girls yell, “Do not hit send!” while the third says “send,” a running gag where two out of the three agree on certain topics, with the third one casting the dissenting vote.

As time goes by, each of the girls marry filling Jordan’s life with endless rounds of engagement parties, wedding showers, and weddings. One of the most poignant scenes is between Jordan and Laura on her wedding day. (Opening lines of this review) All the sadness and resentment he’s been holding is unleashed in a heartbreaking monologue as Laura stands there in her beautiful gown trying to understand why he’s not happy for her, “On the most important day of my life.” He points out that at the weddings of their friends, he always danced the first dance with her and now she would be dancing the first dance with her new husband and he would be relegated to the background. He is also angry that she did not make him one of the bridesmaids and instead wants him to read a poem. In the middle of his tearful, accusatory, angry monologue he inserts, “I wouldn’t miss your wedding for the world,” a moment of levity for Harmon’s extremely well written character of a man confronted with the reality of being young, single, gay, and possibly friendless.

Rounding out the talented cast is Jordan’s grandmother Helene, well played by Concetta Tomei. Grandma is an amusing drama queen and casually discusses the various ways she could kill herself – from pills, to cutting her wrists – declaring none of those methods are particularly appealing. Her home is Jordan’s comfort zone and she entertains him by looking at old family photos and always asks him, “How is your social life,” with the emphasis on “social.” He tells her “All my friends are dying,” using marriage as tantamount to the death of their friendships.

One could safely say we laughed and laughed until we cried as Jordan’s closing heart-wrenching monologue reveals how lost he is now that his three best friends are married, an experience that really isn’t “gender specific” and one that perhaps many of us have endured ourselves