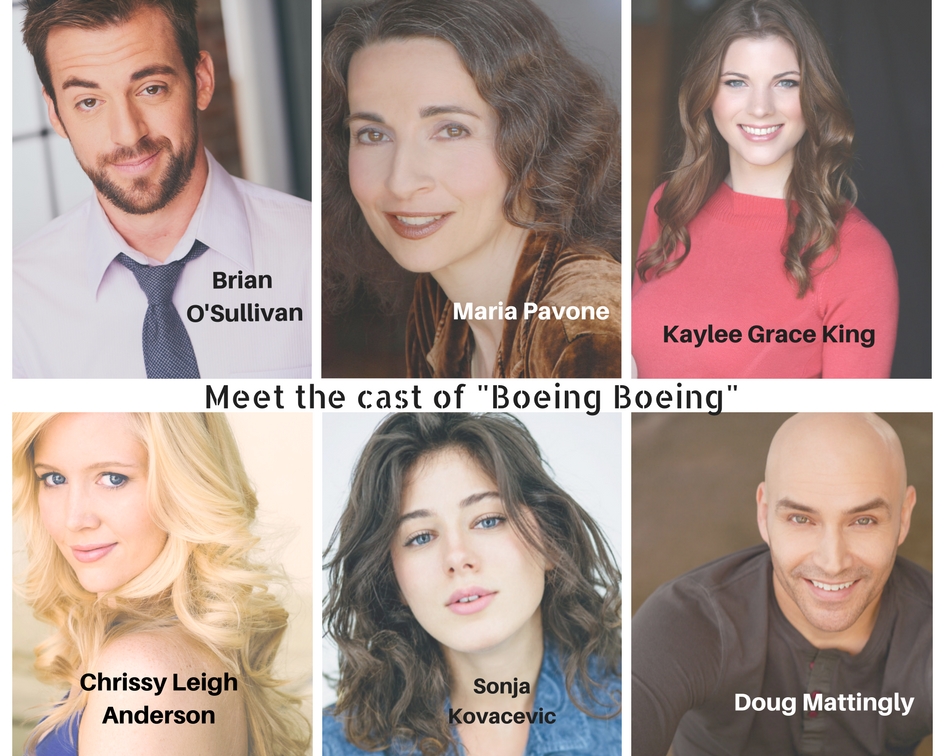 Boeing Boeing is set for take-off at the Morgan-Wixson Theatre as part of their Mainstage series. This award-winning farce is written by Marc Camoletti, translated by Beverley Cross & Francis Evans, and is directed by Branda Lock.

Set in the 1960s, bachelor Bernard couldn’t be happier: a flat in Paris and three attractive
stewardesses all engaged to him without knowing about each other. But Bernard’s life gets bumpy when his friend, Robert, comes to stay, and a new, speedier Boeing jet disrupts his careful planning. Soon all three stewardesses are in the city simultaneously, timid Robert forgets which lies to tell to whom, and catastrophe looms. Written by French playwright Marc Camoletti, and translated by Beverley Cross and Francis Evans, Boeing Boeing premiered in Paris in 1960, where it ran for 19 years. Nominated for six Tony Awards in 2008 and winner of Best Revival of a Play, it was once listed in the Guinness Book of World Records as the most-performed French play in the world. Boeing Boeing was made into a
movie starring Tony Curtis and Jerry Lewis in 1965 and has left audiences airborne with laughter ever since. The New York Times said that the play “soars right out of its time zone and into some unpolluted stratosphere of classic physical comedy.”

Adult situations and sexual innuendoes make this show appropriate for ages sixteen and up.

Director Branda Lock is thrilled to be landing Boeing Boeing on the Morgan-Wixson stage. She loves the way the script hilariously satirizes the 1960s playboy. “The ‘60s era was the Golden Age of the ‘alpha male’ and the playwright saw the hubris in this character in many ways,” Lock observes. “The play reminds me of the vibrancy of the works of Moliere, Restoration Comedy, and Commedia Dell’Arte.”

Lock looks forward to delving into the characters with her actors to find the truth behind the archetypes such as the “bleak French,” the “stern German,” and the “friendly American”—not just for comedy’s sake, but because, she notes, “beneath every stereotype or persona we wear, there is an insecurity and vulnerability that can often lead to the most extraordinary and hilarious circumstances.”

The cast includes Chrissy Leigh Anderson who recently appeared in Some Girls, the films “Then What Happened” and “Always a Bridesmaid,” and on television on “Days Of Our Lives.” Kaylee Grace King last appeared as Mindy in 5 Women Wearing the Same Dress at Texas State University, The Queen in Valhalla, Waverly in Recent Tragic Events, and in the short film “Half Days in the Fall.”

Sonja Kovacevic has appeared in the films “The Allnighter,” “The Grey,” and “Three Days in
the Hole.” Doug Mattingly recently appeared as Tom in Dinner With Friends at the Little Fish Theatre, Lomax and Bill Walker in Major Barbara at the Infinite Jest Theatre Company, and as the lead in the independent feature film “Back To Zero.” Morgan-Wixson fans will remember Brian O’Sullivan as David in Company; he has also recently played Officer Barrel in Coeurage Theatre’s production of Urinetown. Maria Pavone has played Inspector Coggs in Harrogate House at the Santa Paula Theater Center, Daria Chase in The Game’s Afoot at the Pierson Playhouse, and Constance in The Constant Wife at the Westchester Playhouse.

The show runs from May 5 – May 27, 2018, Fridays and Saturdays at 8 p.m., and Sundays at 2 p.m. The Morgan-Wixson Theater is located at 2627 Pico Boulevard, Santa Monica 90405. There is Free parking about a block west of the theater at the Venice Family Clinic.

Reserved seats are available at www.morgan-wixson.org or by phone at (310) 828-7519 or by email at mwtboxoffice@gmail.com. Adult tickets are $23, Student and Senior tickets are $20.