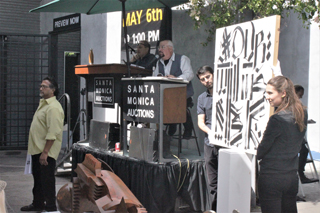 Acrylic, oil and watercolor paintings, screen prints, lithographs, statues, photographs as well as mixed media art went up for auction Sunday May 6. The art auction was co-hosted by Santa Monica Auctions and curated with art from the Robert Berman Gallery. Art collectors, placed their bids from around the auction stage, with incoming phone and internet bids placed via a row operators on the sideline.

Items that went up for auction were created by local and international artists; Shepard Fairey’s signed lithograph “Hope” (2008); Andy Warhol’s “Mao” (1972); and a photograph of Half Dome shot by Ansel Adams (1938). Robert Berman introduced more than a hundred artifacts that were created over several decades by renown, lesser known, and anonymous artists. “We’ve taken it out of the frame so people can inspect it” declared Berman of Warhol’s “Mao.”

While there were larger art pieces that were brought out by numerous art handlers, the authenticity and condition of the art was also an essential element, Berman cited the certifications, galleries and museum exhibitions as well as the art history of the artists.

Steven Irving, one of the art handlers, wore white cotton gloves as he transported art pieces to the staging area.

“First you have to make sure that it is okay to move” he told The Mirror, next “you check that it has a secure frame.” As an additional precaution, Irving added that it is important to make sure that the art piece is “safe to come off the wall.” Irving has worked at numerous art shows and exhibitions across Bergamot for the last decade.

While some art pieces stayed in the auction’s preview area, others made it to the staging area, a Margaret Keane painting fetched a whopping $110,000; while an original signed Keith Haring went unsold. Berman stated that only some of the pieces would be “saved for the next auction or museum show.”

At the close of the auction Claudia and Rob Taylor discussed their new acquisitions with John Colao, a regular attendee of Berman’s art auctions for the last “25 or 30 years.” “I’m here every auction because it’s fun and there’s a great selection.”