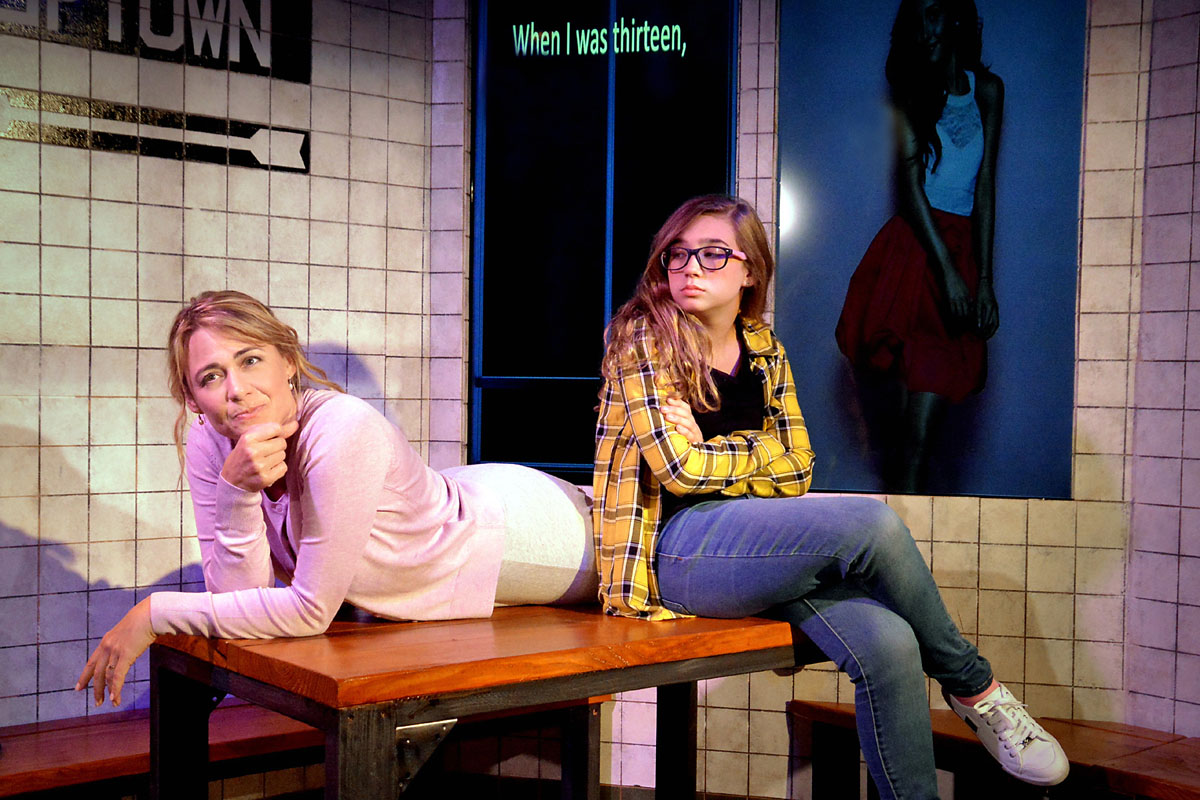 With 28 years of producing, directing, and writing under his artistic belt, resulting in over 225 awards for the works presented at the Fountain Theatre, co-founded with Deborah Culver in 1990, it comes as no surprise that Stephen Sachs has once again created a compelling, visually stunning play. I say visually stunning as “Arrival & Departure” is inspired by Sir Noël Coward’s “Brief Encounter” and is a multi-media production that incorporates both film and live action, with the cast comprised of hearing and deaf actors.

Performed on a highly creative set designed by Matthew G. Hill, who maximizes the limited space by creating a Dunkin’ Donuts coffee shop nestled in a New York City subway station, which easily morphs into the living room, bedroom or kitchen of Emily (Deanne Bray) and her husband Doug (Brian Robert Burns). How, might you ask, could this be accomplished without moving set pieces around? Well, here’s where the influence of the iconic film comes into play (no pun intended). Superbly envisioned by director Sachs, Nicholas E. Santiago’s video design masterfully creates the different settings – including train stations, speeding trains, and crowds of people frenetically rushing about the city streets, which Sachs emulates on stage with rapid, rushed movement patterns executed by the cast. I think you get the idea. You are watching a film representing the different settings which then segues into live action utilizing both oral and American Sign Language, (ASL) including open captioning to accommodate both deaf and hearing audiences.

The story begins at home of Emily and Doug and their daughter Jule, (adorable Aurelia Myers) who is in the throes of 13-year-old angst. Her mom is surprised at her unhappiness with Jule’s friend, (Claire Elizabeth Beale). “I thought you were best friends?” “I don’t even like her.” This young lady has become smitten with a boy she met on the online Crush Zone and is desperately trying to convince her parents that she should be allowed to meet him. As if being desperate to date wasn’t enough, the poor kid has an experience that plunges her deeper into the decision that no one will ever love her. Emily, who is hard of hearing, has learned ASL. She wants to be a good wife and is trying to please her religious husband by agreeing to being baptized and devoting her life to Jesus Christ. Her “voice,” when she signs, is effectively spoken by Stasha Surdyke, who captures the nuances of Emily’s conflicted character. She is unhappy that her husband never learned ASL so that she can more comfortably communicate with him. Beneath the devoted wife/mother exterior, we sense a growing anxiety and Bray’s performance is truly riveting as she captures the conflicted multi-layers of her character.

The initial encounter begins at the 59th Street subway station when a speck flies into Emily’s eye. She needs a napkin and goes into Dunkin’ Donuts, run by Mya, a tough food service worker who does not brook fools easily. Jessica Jade Andres gives a wonderful performance as this no-nonsense New Yorker who is being wooed by transit cop Russell, an endearing character playfully brought to life by Shon Fuller. It is here that Emily meets Sam, magically played by Troy Kotsur, Bray’s real-life Deaf husband. Sam’s signed dialogue is voiced through Adam Burch, who also captures the deep emotions of his non-speaking counterpart. Sam, a filmmaker who teaches Deaf students the art of filmmaking, is gallant and removes the speck from this pretty young woman’s eye, thus inaugurating a slowly evolving warm, loving but sub rosa relationship. They begin to meet on Thursdays at Central Park, the setting crisply brought to life by the authentic video of the park being flashed in the background. He too, is married and has two sons but the attraction is too powerful for them to stop seeing each other. In one particularly endearing moment, Sam, with a delightfully active inner child, convinces Emily to remove her shoes and take a dip in the lake, which is so realistically presented that as an audience member you would love to join them. How does this liaison end? Will Emily’s family issues be resolved? Will the terribly insecure daughter develop any confidence? Will Emily’s husband learn ASL? What happens to Sam and his family? I’m not saying another word.

Once again, Sachs has scored a hit with this superb production which will make you laugh, and might even bring a little tear to your eye as you get a peek into the lives of ordinary people and how a chance encounter impacts on their families. It might even remind you of have a chance encounter of your own. The well-crafted script also illuminates the frustration of being stuck between the hearing and the hard-of- hearing worlds. In the end, this is an aching love story woven through the prism of the every day familial demands of two strangers, who through an unexpected meeting, fall in love.

By Beverly Cohn July 23, 2018
in Life and Arts
Related Posts