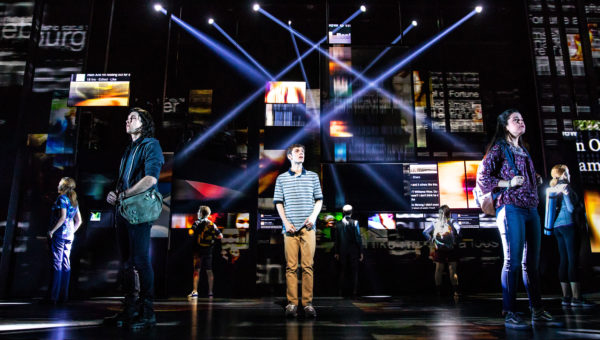 When the National Touring Company of a play that won six Tony Awards last year goes on the road, one invariably wonders if the Los Angeles production will get the same caliber of performances as those presented on Broadway. Please don’t worry as this production of “Dear Evan Hansen,” with book by Tony Award-winner Steven Levenson, 15 songs with music and lyrics by the award-winning team of Benj Pasek and Justin Paul, who won an Oscar for “La La Land,” has travelled exceedingly well. Although you might not walk out of the theatre humming any of the music, each of the songs is relevant to the immediate action and drives the narrative forward. Tying all the complex elements together is the impeccable direction of Michael Greif, four-time Tony Award nominee for his direction in “Rent,” and “Next to Normal”. What’s fascinating about the strong book is if you removed the musical components, it could be a stand-along riveting drama, but that said, the music certainly supports the compelling narrative.

The sometimes-heartbreaking story revolves around 17-year-old Evan Hansen, played to perfection by Ben Levi Ross who was the understudy in the New York production. His portrayal of Evan as an extremely maladjusted teenager who is more comfortable being on his computer than interacting with his classmates. is nothing short of spine-tingling. This amazing young actor has mined the myriad complexities of his character, not only the organic vocal stuttering but imbued his body with all the tics and mannerisms that go with such a neurotic, jittery person. It would have been easy to layer on some of his quirky body gestures but this actor’s physicalization clearly grew out of the deepest recesses of his character’s psyche and one can feel the painful struggle Evan goes through on a daily basis.

The story begins rather innocently. Evan has been assigned by his therapist to write a letter to himself, and he begins it with, “Dear Evan Hansen” and signs it “Me.” In the meantime, one of his classmates, Connor Murphy, well played and sung by Marrick Smith, commits suicide and through a bizarre set of circumstances the letter morphs into Connor’s farewell note and is now in the hands of his grieving parents. Except for one brief encounter, where Connor scribbled his name across Evan’s arm cast, that was the only time they spoke to each other. The dead boy’s “ghost” reappears through the tangled web of deceit and sings “Sincerely, Me” with Evan and Jared. The grieving parents, Larry and Cynthia Murphy, sympathetically played by Aaron Lazar and Christiane Noll, want to know about Evan’s friendship with their son and thus begins a series of well-intentioned tales. They are convinced that their son and Evan were best friends and asked if they had emailed each other and could they see copies. Evan enlists the help of his best friend Jared Kleinman, wonderfully played by Jared Goldsmith, who becomes his partner in creating the non-existent emails between Evan and Connor. From total strangers, Evan is slowly morphing into Connor’s best friend and with the help of Jared, false narratives are created. The parents become very attached to their son’s best friend and soon he has meals at their home and develops a crush on their daughter Zoe, excellently played by Maggie McKenna. Our neurotic fabricator’s awkwardness becomes exceedingly apparent whenever he’s around her. He sings the lovely ballad “If I Could Tell Her.” I should mention that Ross’ voice is powerful and has that magical ability of going from his middle range to almost an octave above without a vocal break. Some of his solos are in their innate sadness.

The myth begins to take on a life of its own and the whole thing has gone viral. Soon, a fan club has formed, with Alana Beck (Phoebe Koyabe) and Evan acting as co-presidents. Buttons, tea shirts, and wristbands with Connor’s image are being sold, a foundation is set up in the dead student’s honor, and a run-down orchard that Evan said he and Connor visited, becomes a cause célèbre to restore and funds are pouring in from all over the country. One lie after another compounds the last lie and soon Evan is swimming in so many lies that he almost forgets what’s real. This fantasy has given him a new family that loves and cares about him, something that is sorely lacking in his life as his mother, well played and sung by Jessica Phillips as his mother Heidi, is absent most of the time, forgetting commitments to her son to the point that she really doesn’t know anything about him, other than he has to take pills to keep his neurosis under control. As Evan’s fake narrative advances, his need for psychotropic drugs disappears. There is one particularly poignant scene where Connor’s dad gives Evan his son’s unused catcher’s mitt and shows him how to break it in. They sing the ballad “To Break in a Glove.” Conner’s parents are now so attached to Evan that they want to give him the money they saved for their son’s college. Evan’s mom is furious and storms out of their home. Eventually she sings “So Big/So Small.” As you might guess, eventually, the lies begin to unravel and what happens will surprise you.

Besides the talented cast of singers and dancers, what is also fascinating about this production are the compelling production values. The theme of a modern-day musical begins with David Korins’ fabulous scenic design but it is Peter Nigrini’s fascinating projections that gives the production such a contemporary look. Hundreds of extraordinary overlapping images of the chatter taking place on social media fill the back wall sometimes illuminating how a lie on social media can impact thousands of lives. The images also project the overwhelming feelings some characters are experiencing. Other members of the team include, Japhy Weideman, (candy-colored lighting design,) Emily Rebholz, (costume design,) Nevin Steinberg (sound design,)* Austin Cook (music director,) Justin Paul (vocal arrangements and additional arrangements,) Ben Cohn (Associate Music Supervisor,) and last, but certainly not least is Alex Lacamoire’s music supervision, orchestrations and additional arrangements, and Danny Mefford’s exciting choreography.

Following the play, my friend and I had an interesting philosophical discussion on the morality and ethics of perpetrating a lie if it results in changing people’s lives in a positive way and galvanizing them into action they might not have taken before. Let me know what you think after seeing the play.

*Definitely not the fault of the designer, but technically the acoustics were a problem – sometimes the orchestra was way too loud making it difficult to hear the lyrics and at other times, the sound system was uneven. Not a new problem at the Ahmanson.

By Beverly Cohn November 1, 2018
in Life and Arts
Related Posts