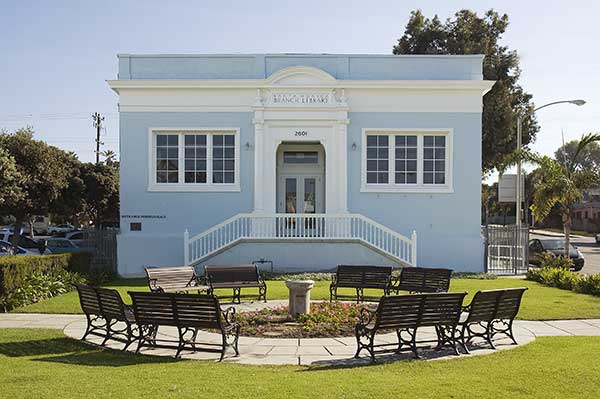 By the early 1900s, as Santa Monica evolved into the city it is today, it was apparent that the Santa Monica Public Library had outgrown its quarters.

In 1906, the Clapp Brothers Drug Store on Pacific Avenue established a book exchange where patrons of the public library went to pick up and return books. Elfie Mosse, the City Librarian, requested funding to build Santa Monica’s first branch library, and on February 15, 1918, after a $12,500 grant from Andrew Carnegie, the Ocean Park Branch Library opened its doors to the public.

A century later, the Ocean Park Branch Library is one of the few remaining pieces of the Carnegie legacy in Southern California and a testament to the unique history and diversity that make up the roots of Santa Monica.

Even as technological advances have vastly changed the way we all receive information and interact with each another, the Ocean Park Branch Library still maintains its relevancy within the community. As Southern California continues to grow and evolve, pieces of its history that connect us to the past become even more important. Branch Manager Karen Reitz reflects on the library’s historical impact and its role within the community today.

“The Ocean Park Branch provides its culturally diverse community with a place for learning, sharing and connecting. Its 100- year old history as one of the last standing Carnegie Libraries in Southern California serves as a reminder of the past and the eternally timeless value of libraries.” Reitz said, “We offer story times and educational programs for youth, book groups, entertainment & educational programs for adults, computers and electronic resources, as well as books, movies, magazines, newspapers, music and so much more!” It may take practice, practice, practice to get to Carnegie Hall, but all it takes is a library card to visit the Ocean Park Branch Library.”

From February 18 to March 10, the library will be closed temporarily while it undergoes structural improvements. Patrons are encouraged to visit the Main Library as well as the Fairview, Montana Avenue and Pico Branch libraries. On Saturday, March 23, all are welcome to attend the Ocean Park Branch 100th Anniversary Finale from 2–4 p.m. Co-sponsored by the Santa Monica Conservancy and the Ocean Park Association, refreshments will be offered on the lawn along with music, games and crafts to celebrate an important piece of Santa Monica history.