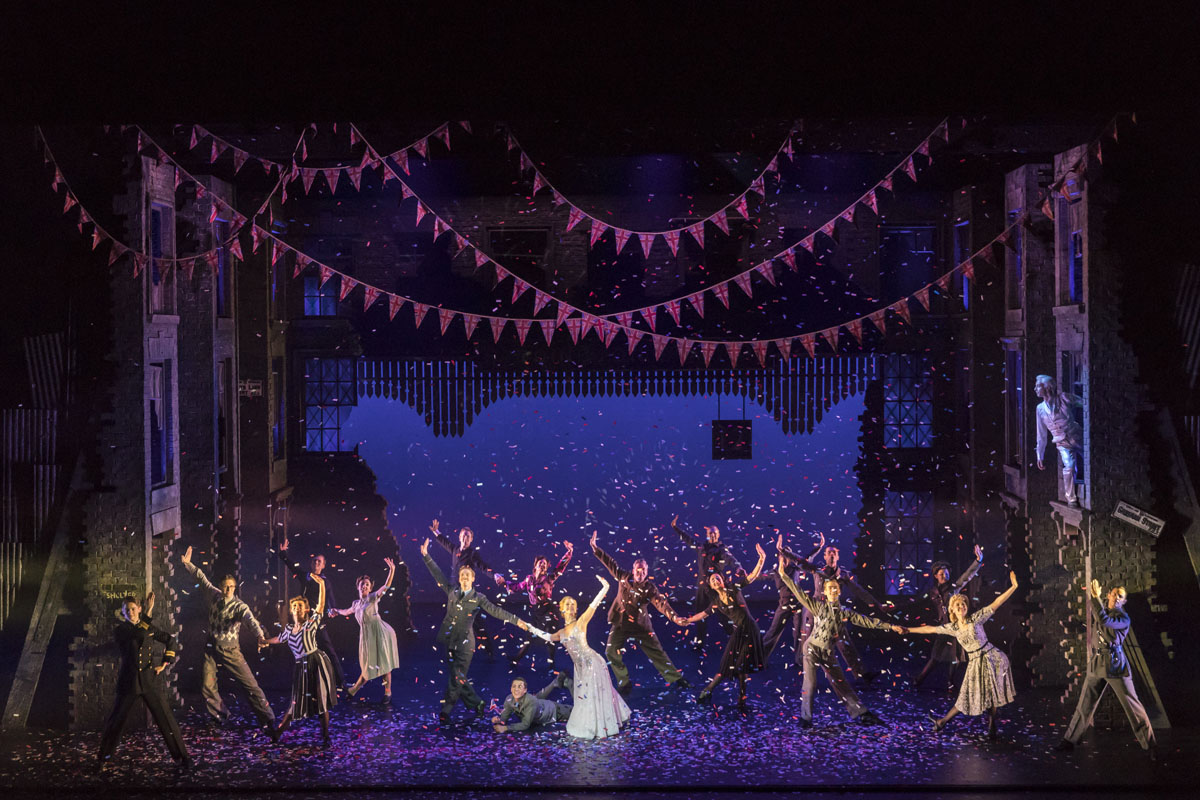 If a picture speaks a thousand words, then Sir Matthew Bourne’s astounding re-imagined tale of Cinderella is akin to the 2010 edition of the Encyclopedia Britannica, which consisted of 32 volumes for a total of 32,640 pages.  In this production, not a word is spoken as every detail is clearly illustrated through his remarkable direction and choreography, combining traditional ballet elements with freewheeling, exaggerated modern dance movements.

From the moment the curtain rose revealing the ravages of war-torn London in 1940, as created by award-winning set and costume designer Lez Brotherston, Bourne’s astonishing interpretation of this ageless romantic fairytale was danced to perfection and every detail of the drama clearly enunciated as executed by his company of skilled ballet dancers.  With bombed-out buildings looming on stage left and right, we are taken into the interior of the family home.  Poor Cinderella, excellently danced by lovely Ashley Shaw, is issued commands by the deliciously wicked stepmother Sybil, played by Madelaine Brennan who is truly the naughty spit that holds the family together.  Treated like a scullery maid instead of a family member, Cinderella must obey her mean stepsisters danced by Sophia Hurdley as Irene and Anjali Mehra as Vivien.  The stepbrothers are equally obnoxious as interpreted by Jackson Fisch as Malcolm, Daniel Wright as Vernon, and Stephen Murray as Elliot.  Rounding out the family is the father Robert, played by Alan Vincent.  Their collective dislike of Cinderella is clearly delineated through their complex moves.  In a quiet moment, our poor waif picks up a beautiful wrap that belongs to Sybil and holds it to her face.  She, of course, is royally chewed out for daring to touch something that does not belong to her.  In another quiet moment, Cinderella does a sweet dance with a mannequin, which under Bourne’s riveting direction, transforms into a live man and a haunting dance sequence follows, clearly indicating the love that is locked deep inside of her.

Echoing the traditional story line, the family receives an invitation to a ball and as you already know, our heroine is excluded.  As the family machinations continue, sirens blare, one of the special sound effects designed by Paul Groothuis.  Using the music of Prokofiev, he also designed the musical score, which was recorded by a 60-piece orchestra and sounded like the orchestra was actually in the pit.  A blackout ensues, which was followed by a dramatic dance sequence, with some of the dancers wearing gas masks as they survey the carnage that lay before them.

Despite the war, the ball is a go and is being held at The Café de Paris, a London dance hall.  Now, we all know that Cinderella will be going to that ball and in the traditional tale, her fairy Godmother comes to her rescue.  But, in this stylized interpretation, that role has been transformed into The Angel, as danced by the most extraordinary Liam Mower, whose exaggerated movements bordered on otherworldly or yes, heavenly.  So, this young, rather plain girl, is transformed into a radiantly beautiful young woman and at long last she meets the prince, but this time he’s a RAF airplane pilot named Harry, played by Andrew Monaghan.  Their eyes meet and an erotic sequence unfolds.  In the meantime, despite the war being waged all around them, the wicked stepmother and her nasty children are having a great time as expressed through the raucus drinking scene, with impressive acrobatics executed by the corps de ballet, augmented by the exquisite lighting by Neil Austin, adding to the overall stunning look of the production.  Lest we forget, Cinderella is under strict instructions that she must leave by midnight and a giant ticking clock looms in the background.  At the stroke of Midnight our beautiful heroine flees, accidentally losing one of her beautiful sparkly sapphire blue shoes, which Harry picks up.  Subsequently, a gang of men attacks our hero and he winds up in a convalescence home, a particularly interestingly staged sequence wherein Bourne uses white medical screens manipulated around the stage by a team of “doctors and nurses.”  Coincidentally, Cinderella, who was injured in a bomb blast, winds up in the same facility.  Wicked stepmother has her eye on Harry for one of her daughters and the entire family shows up en masse to visit the injured pilot. When mean Sybil his sees her stepdaughter in a nearby bed recovering from her wounds, she tries to eliminate the competition but is stopped dead in her tracks by the watchful hospital personnel.  Well, we all know what happens next.  Harry has the matching shoe and we assume they will live happily ever after.

Divided into three acts with two intermissions, which in this case is welcome so the audience can catch their collective breath and give this extraordinary dance troop time to change into more of Brotherston’s delicious period costumes.  The action takes place in a variety of locations including the pilot’s lodgings, the streets of London and its underground, a Thames embankment, and Paddington Station, each of which is clearly illustrated by his spot-on set design.  When you combine Bourne’s masterful direction and choreography with all the extraordinary technical elements, including Duncan McLean’s compelling projections, the combined artistic designs culminate in creating this glorious New Adventures Production achieving a magical, rare evening of theatre that will linger in your senses for a long time.

By Beverly Cohn February 26, 2019
in Life and Arts
Related Posts