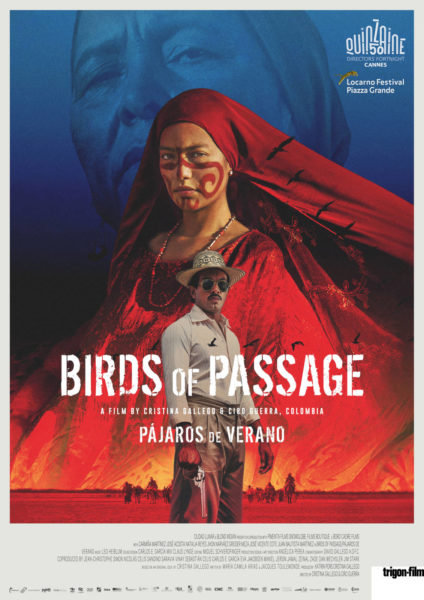 Directors Cristina Gallego and Ciro Guerra, a husband a wife team, had worked together on the movie Embrace of the Serpent in 2015, a story about the relationship of an Amazonian Shamaan and two scientists searching for a sacred healing plant. Embrace of the Serpent won a nomination for Best Foreign Film Oscar. That success allowed them to finally pursue their passion project, “Birds of Passage”. Both films feature “Western” cultures extracting natural resources from South America.

In “Birds of Passage” the subject is the treasure of marijuana that draws outsiders to territory occupied by indigenous tribes. This story takes place in the Guajira Peninsula of northeastern Colombia near the border of Venezuela.  “Birds of Passage” is the term that the indigenous people of this area have for drug runners who arrive, take what they want and leave behind a community in ruins.

This award-winning epic film begins and ends as a plaintive minstrel’s song, which is the manner in which history is memorialized in the Wayuu culture, the Native American ethnic group who live in the Guajira Penninsula. Women are revered for their wisdom in their culture and play a powerful role in the social structure.

This tragic story is very important and I hope will be seen widely by audiences, lest we lose sight of the essence of our souls. It echoes John Steinbeck’s classic, “The Grapes of Wrath,” in style. The story is told almost entirely in the Wayuu language, with subtitles. The film communicates to worldwide audiences easily as this language is very rhythmic and the narrative is told visually through the characters’ faces and actions. The Wayuu language is actually part of the Maipuran or Awarak language family predominant in parts of the Caribbean islands.

For each of the cast, with the exception of Natalia Reyes as “Zaida” and Carmina Martinez as “Ursula,” this film was their first work as an actor and almost all the actors are real members of the Wayuu tribe. The striking visualization of key turning points in the drama is shown in vivid and stark detail. The landscape and living conditions of the world of the Wayuu are beautifully captured on camera by cinematographer David Gallego. The world is shot from the “Point of View” of the tribe. The transformations that happen to the tribe’s lifestyle and to the personalities of its members, as they amass wealth from the transport of the drugs, is shown with great depth and nuance.

The true premiere of “Birds of Passage” was arranged for the Wayuu themselves in their own territory, in a central square. Thousands journeyed there to see this premiere. The tribe members became the first audience to give a positive review of this remarkable film.