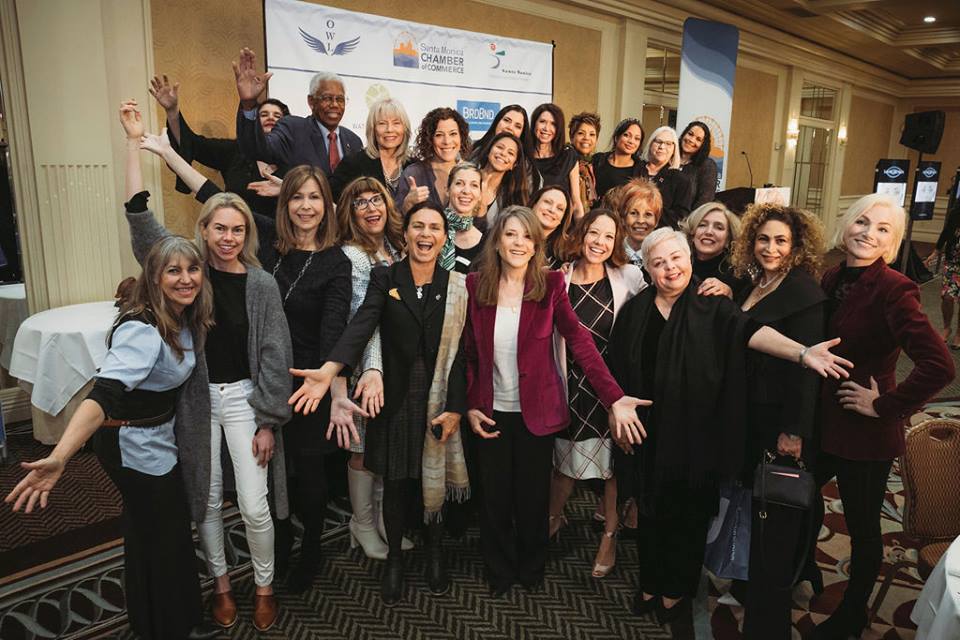 On Monday morning, my alarm went off at 5:30 a.m., which was really 4:30 a.m due to the seasonal time change that occurred on Sunday. Needless to say, it was EARLY. I stumbled to the kitchen to make my first cup of coffee. Had a couple of sips, and jumped in the shower.

My sweet Maltese Zoey, who was fast asleep, wrapped in the comfort of 600-count cotton sheets, didn’t even lift her head to see what was going on. I got dressed, finished the coffee, brushed my teeth and I was off.

Where was I going? To the Santa Monica Chamber OWLs event. That Laurel Rosen (President of the Chamber), what was she thinking? A Monday morning after a time change that left us with one hour less? I soon forgave her when I settled in at my table at the Fairmont Miramar Hotel. I have to say, it was worth getting up for this inspirational event

Every year, in conjunction with International Women’s Day the OWL event is held, and honors women who make a difference in the world. Julie Platt and Marianne Williamson were honored. Most people know Marianne Williamson; she’s running for President of the United States!

Not too many knew Julie Pilat, a youth mentor and community advocate who is the head of global operations for Apple Music Beats 1 streaming service. A natural storyteller, she riveted the audience by detailing her journey about saving the lives of a young teen and her baby. A mentorship program paired her with a 15-year-old girl named Vicky from South Central Los Angeles.

Vicky had no where to go. No money, no safe home, and faced the threats of gang violence. She was the sole guardian of her infant daughter. Julie took her in. She gave her a safe home, and even created a babysitting network made up of her co-workers, friends and family so that Vicky could go to school. Julie was always independent and never asked for help. This situation was far too big for her to handle on her own. Julie’s lesson: Ask people for help. When she did, that’s when everything fell into place for Vicky and Julie.

It was an emotional, uplifting story of hope and possibility. Well worth getting up at 4:30 a.m.

Her story took me back at least 15 years ago. I was asked by a community-based organization if I could use an intern for my business. In those days, I always needed an intern. Yes!

On a Monday morning, I met Venus. Full of life, energy and intelligence. And she was gorgeous. She was involved with the Miss California Pageant franchise, and won a local competition. Impressive. I put her to work immediately.

I took her under my wing, and taught her the basics of business. How to stick to what you’re doing to completion. How to talk to people in an engaging, professional manner. (She nailed that one) I took her out to lunch a lot. I even drove up to Fresno to see her compete in the Miss California pageant.

About a year later she left to pursue her education. I did not hear from her or anything about her for a few months. Then I got a call from LA County. Venus was up for a job in the correctional offices! They needed a reference. I told them if they didn’t hire her, they were making a huge mistake. They hired her. So exciting! I was thrilled for her.

Some years later, I received another call. A mortgage company, checking references on Venus. This time it was for a loan she was applying for to buy a house! I choked up. I was so proud of her. With all odds against her, she ploughed forward, never giving up.

I tried to contact her several times. I couldn’t find her, but I’ll keep trying. I’d like to think that I had some part in her transformation. I know I did. Congratulations Venus! I love you.

And Congratulations, Owlies! You guys rock.