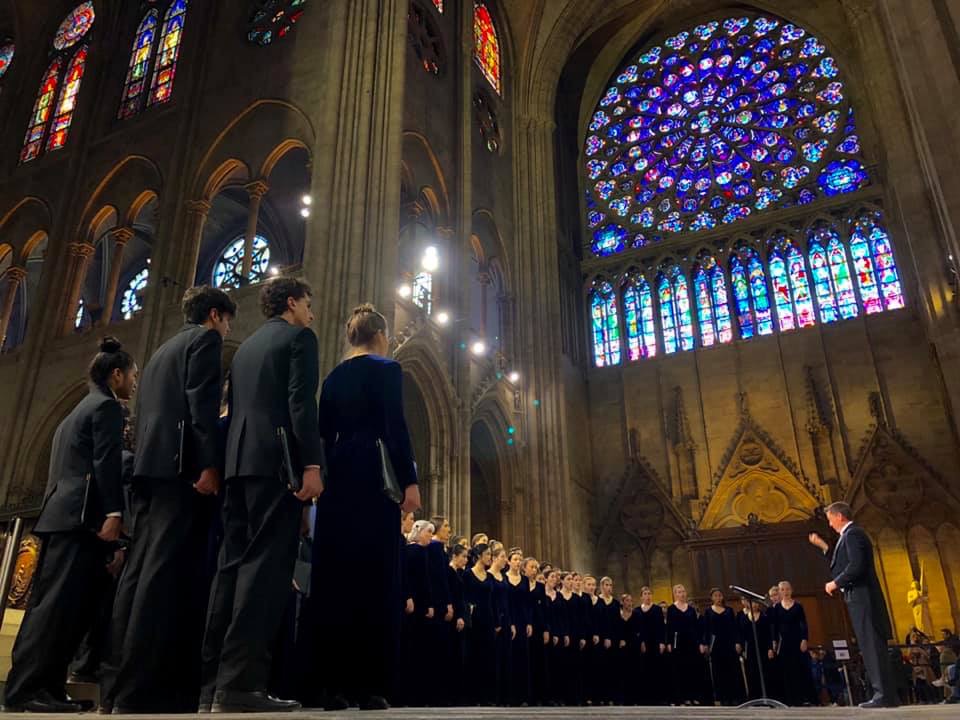 Construction of the Notre Dame Cathedral began in 1163 during the reign of King Louis VII and was completed nearly 200 years later in 1345. The famed cathedral survived centuries of war and unrest to become one of Europe’s most revered and recognizable monuments. On April 15, shocking images and video of the Notre Dame Cathedral on fire riveted the world. Centuries after the first bricks were placed, the world watched as pieces of the cathedral collapsed. Millions of people mourned by sharing personal photos of the cathedral and the touching stories that went with them.

“We were the last choir to perform there before it burned. The experience was frankly amazing. I had visited the cathedral four years before and was in awe of it. It is a rare opportunity to get to perform there. Being able to fill that amazing place with music is one of the highest honors of my life, I feel so humbled and amazed to have had that opportunity,” Kubani said.

News of the fire was unsettling and overwhelming.

“I was shocked,” Kubani said. “Walking through the airport I felt completely numb. I was watching the live stream when the spire fell, and my stomach dropped. It felt like someone had died right in front of me. I feel lucky that we were able to sing there before it was lost. The fire destroyed the roof right above where we sang; the photos of the rubble piled up where I had been standing just days before shook me to my core.”

Sam Miller, a junior at SAMOHI and member of Madrigal Ensemble, also performed at the cathedral. “The experience was amazing. After I heard about the fire I was dumbfounded. I didn’t find out until we landed back in LAX. I saw the news notification and said, ‘Oh my God guys, Notre Dame is on fire.’ Some people didn’t believe me, but by the time we landed everyone knew. I was just heartbroken and shocked. It was so surreal.”

Miller continued, “Seeing photos of Notre Dame on fire and knowing that this incredible monument had been subject to such a terrible event was just awful. I’m a history geek so having the opportunity to be in a centuries-old cathedral and to touch the pillars and stone and stand on the ground was incredible.”

Director of Vocal Music at SAMOHI Jeffe Huls led both choirs through their performances at the cathedral. “This is the third time that the Santa Monica High School Choirs have performed at the cathedral.  It is always awe-inspiring. I think being able to perform in such a revered space gave the students a great sense of accomplishment, that all of their hard work preparing, had been rewarded.”

Huls recalls the moment when students learned of the fire. “Normally, the plane would have been buzzing with energy from the students.  It was pretty silent.  Some of them cried, most were just shocked and couldn’t believe the news.  The gravity of the moment was palpable.  Seeing the footage of the spire collapsing, students noted that we were standing right under it when we performed.” Huls continued, “It is so hard to imagine that what stood for nearly 1,000 years and withstood wars, and plagues, civil unrest and everything the elements could throw at it, will now be different.  I remember my first personal trip to Paris; I had to see Notre Dame.  It just has that kind of prominence.  It’s so linked to Paris itself, it is hard to imagine Paris without it.  It is humbling to think that we may have been one of the last choirs to perform in Notre Dame as it was.  We are confident that Paris and Notre Dame will be writing new chapters in the book of history. I hope one day to return to see how it is different, maybe even better.”