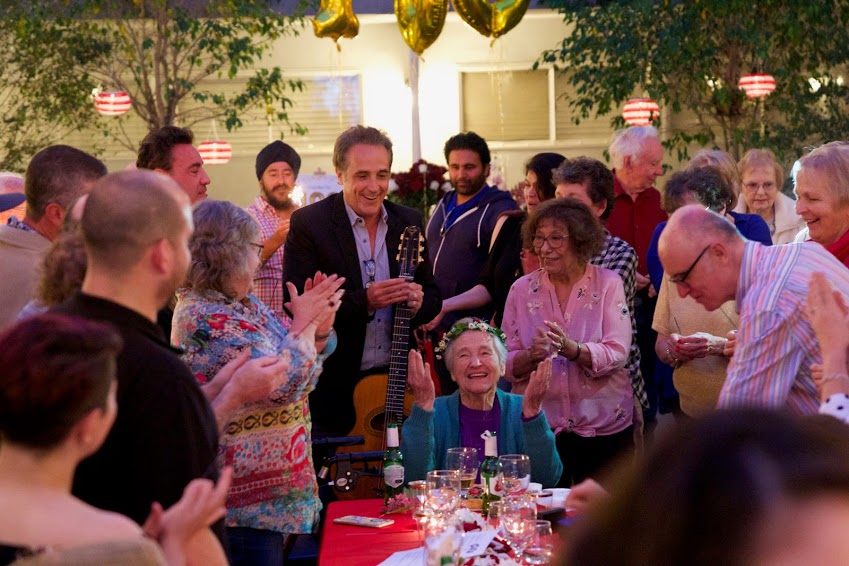 Anna Hafeli was born in Switzerland on April 1, 1919 and has spent the last 44 years of her life in Santa Monica. On Sunday, March 31, just one day shy of her 100th birthday, the community came together and celebrated the momentous milestone for one of Santa Monica’s oldest living residents.

Tom Chambers has lived in the same building as Anna, at the corner of 3rd Street and California Avenue, for 28 years and has been the building manager for the last 15 years. “I used to live on the 3rd floor, but for 10 years, I’ve lived on the first floor where Anna lives. We’ve gotten to know each other extremely well because I’m one door away. My daughter is 12, my son is 8, and they both have grown up coming over to see Anna. They would sneak over here, and she’d give them chocolate.”

Tom began planning Anna’s birthday celebration months in advance and the community at 3rd and California were eager to join in. “We all love Anna so much. She’s a great neighbor. She’s social and comes out and talks to people. People are just drawn to her. My family has been celebrating birthdays with her for years. Her 100th birthday kept getting closer and closer. She goes to 11 o’clock mass every Sunday so I had arranged for that mass to be said in her honor six months ago. We’ve been planning this for a long time. We started out with smaller kind of idea of how to celebrate, but more neighbors started talking about it and more people wanted to be involved. It grew into this big party.”

Over 50 people joined in the celebration including many of Anna’s neighbors as well as her niece, who lives in Beverly Hills, her nephew and his family who came in from Texas, and two cousins who flew all the way from Switzerland. The party took place right in front of Anna’s apartment in her building’s courtyard.

For Tom, the party turned out even better than he had imagined. “About half the people from the building came. Most of the people from the building have been there for a long time. I would say half of the people have been there over 10 to 15 years, so we all know each other pretty well. And we all pitched in to set it all up and make it happen. We had neighbors that know Anna that came over. We rented tables and chairs, set up lights, set up Swiss flags. We had it catered by Panini Cafe. We had wine, beer and drinks. One of her neighbors baked a lot of desserts. Everybody was talkative and friendly. Everybody had a great time, and Anna was just glowing. She was the star. She savored every second of it.”

Even at 100, Anna remains active in the community and remembers clearly what Santa Monica was like over four decades ago when it cost just $175 to rent an apartment. “Years ago, Santa Monica was extremely quiet. It was nice shopping on 4th Street. There were all small stores, and the owners were very friendly. But now there are all these big companies. It’s not as personal anymore, but Santa Monica is still the place to go. It’s very different now.”

As much as Santa Monica has changed over the years, Anna still loves her home just as much as when she first moved here. “The climate is beautiful. I like it. Especially my apartment; it’s always nice. I like the beach. I don’t go to the beach anymore, but I have good remembrance. When I have visitors, they love it here. I wouldn’t want to live in any other place. That’s why I’ve lived here so long.”

The people in the community and the kindness they have shown Anna have also been an important part of why Anna enjoys living in Santa Monica to this day. “I think the people are very nice to me. They’re very polite. Sometimes when I open the door and I walk people come running to hold the door, people I don’t even know! I’m very happy about that.”

When asked what her secret is to such a long and healthy life, Anna responded, “I haven’t found it yet! There’s no secret. It just happens. I didn’t think I’d live this long. The most important thing in life is to stay well.” With a hundred years under her belt and never once catching the flu, Anna has figured out exactly how to stay well.

What makes Anna such a well-loved member of her community is her kindness, openness, and upbeat outlook on life. Tom adds, “She’s so mobile and outgoing. She’s out there walking around every day. I’ve seen her at Vons. I’ve seen her at the post office. If I see her, I’ll pull over and say, ‘Anna! What are you doing? Get in my car!’ I’m worried, but I don’t need to be worried. She’s out there with her walker. She goes fast cruising down the sidewalk! She’s got this extremely positive, happy attitude, demeanor, and outlook. She’s always smiling and lighthearted. It’s really an amazing thing.”