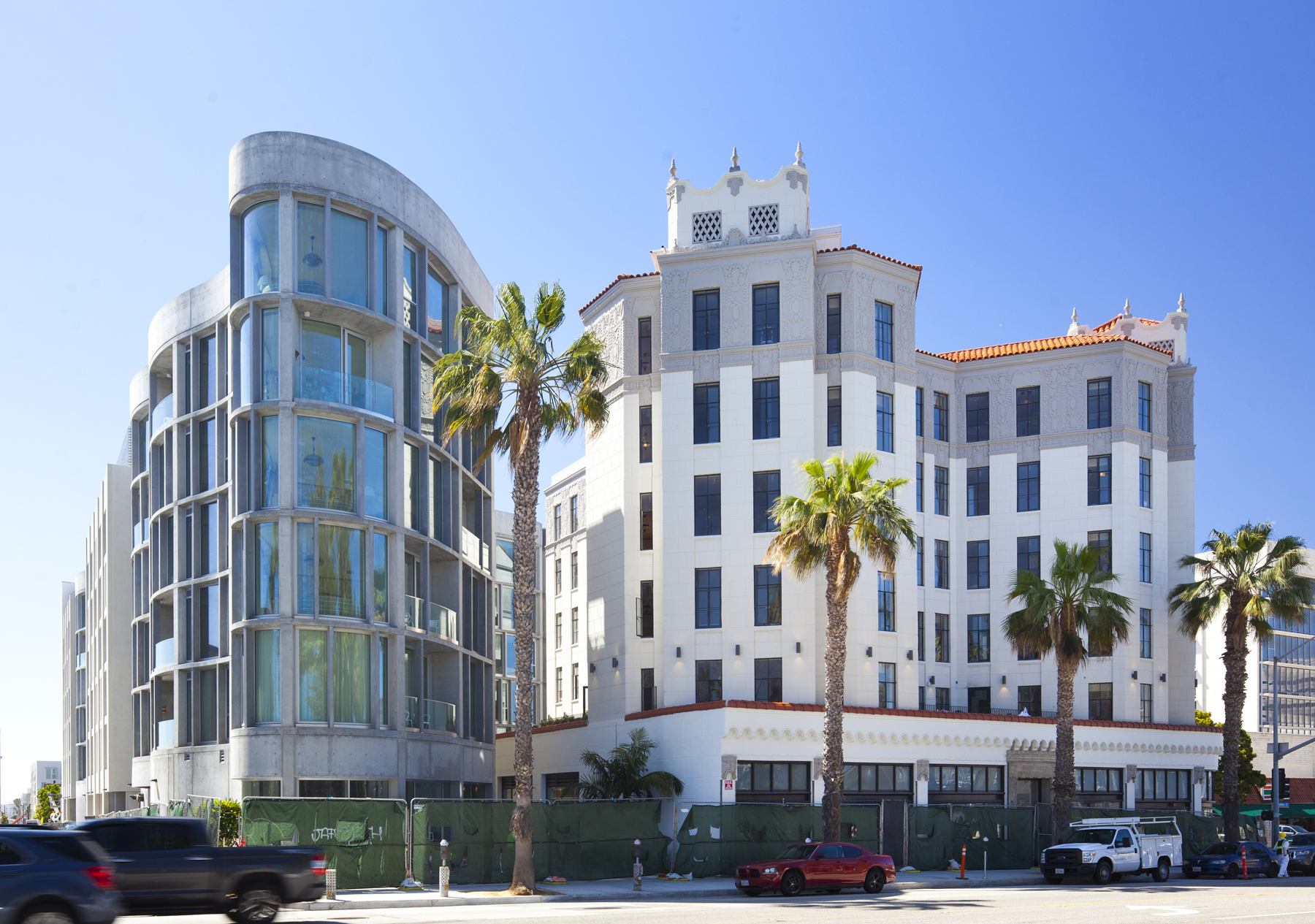 The Landmark Professional Building built in 1928 was originally designed as a medical building and converted into commercial office space in the 1950s. Currently, it has been rehabilitated and combined with a contemporary addition to become a luxury hotel including street-level retail and restaurants. Construction is nearing completion and the hotel is scheduled to open on June 17. Three restaurants including an Ayurvedic spa are scheduled to open later this summer.

The hotel complex combines the adaptive reuse of the historic building with a new contemporary addition flanked by forms of concrete and glass.

“The arcs of these sleek building materials drape around the historic building, reading as monumental and orderly juxtaposed waveforms. The architecture provides the best of adaptive reuse, urban infill and a sensitive approach toward rehabilitation of the historical features found within the original structure. This focused and collaborated effort has contributed a fresh perspective of modern and preservation architecture to the City of Santa Monica Downtown District,” said the project’s architect Howard Laks.

The ground floor open space between the landmark and new building addition includes a retail court and paseo connecting Wilshire Boulevard with 7th Street, creating a campus-style hotel where guests and visitors can walk through and around the structures to use street-level retail and lobby amenities.

The architectural concept and vision was first conceived in 2005 by Laks, an AIA Architect, when the building was designated as a city landmark.

Original design features of the landmark building were preserved and restored with guidance from historic preservationist, Robert Chattel. Notable features that have been restored include the exact building footprint and “Y” shape of its tower wings, original window framing at the ground and upper floors, and terracotta mission tile roof. The building exterior was restored to its original finishes and colors. Exterior ground floor and upper level lighting was replaced with exact reproductions of the original lighting sconces from 1928. Rehabilitation of the Landmark building included seismic and building and safety upgrades, new mechanical, electrical and plumbing and full compliant disabled access standards.

The Santa Monica Proper is the first luxury hotel to open in the city in over a decade. The hotel has 271-guest rooms and suites, 55 of which are located in the historic structure. The hotel interiors are designed by Kelly Wearstler.

The ground floor of the landmark is planned for restaurant Onda, a collaboration between chefs, Jessica Koslow (Sqirl) and Gabriela Camara (Mexico City’s Contramar, Cala). Their menu selections will feature California and Mexican flavors, techniques and ingredients.

The completion of the Santa Monica Proper Hotel is the first of three new full service luxury hotels planned within the Downtown District of Santa Monica.