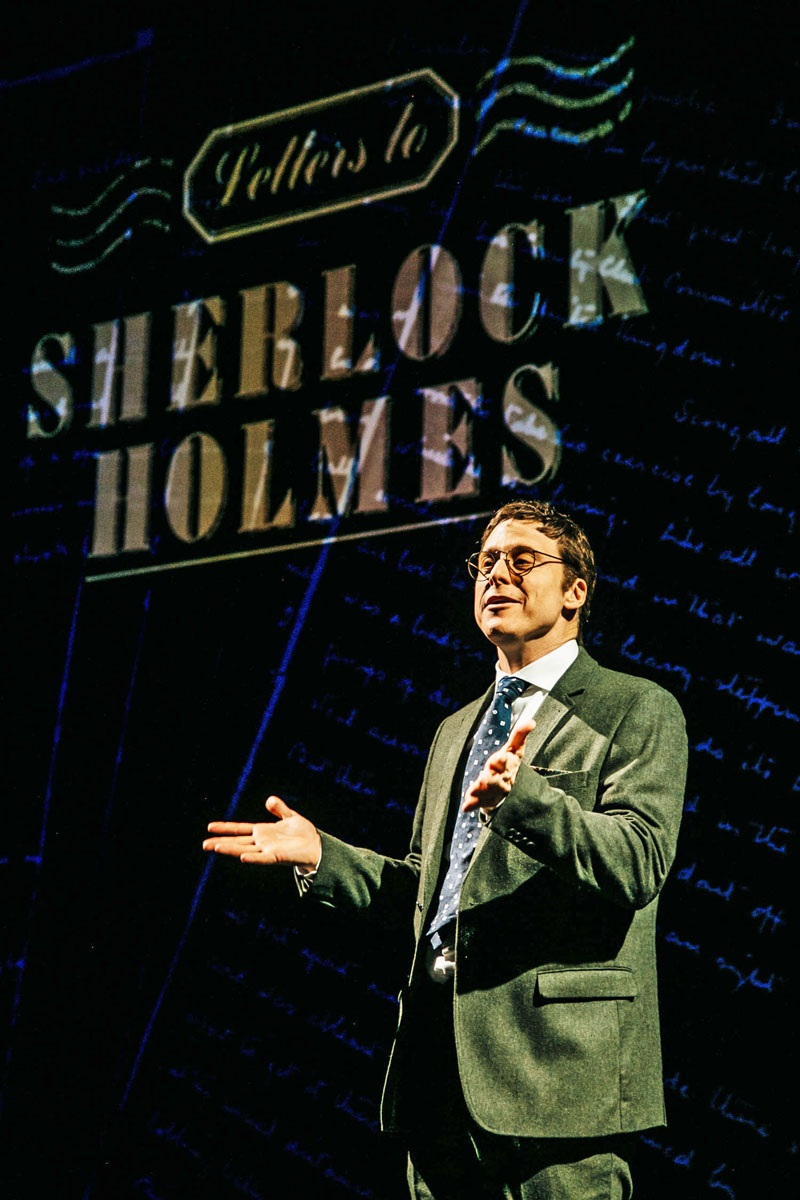 Instead of a “Who done it,” this production of “Mysterious Circumstances,” could be subtitled “Who is it?” My reason? To be revealed in time, so read on.

Matt Shakman’s staging of Michael Mitnick’s play, which was inspired by David Grann’s article published in The New Yorker entitled: “Mysterious Circumstances: The Strange Death of a Sherlock Holmes Fanatic,” is technically quite extraordinary, beginning with a top of the line inventive set design by Brett J. Banakis. With excellent lighting by Elizabeth Harper, E. B. Brooks’ period costume design, and Kaitlyn Pietras and Jason H. Thompson’s projections, the production is quite delicious to watch with the overall look clearly Broadway caliber.

Apparently based on true events occurring in 1894 and 2004, a writer by the name of Richard Lancelyn Green, well played by Alan Tudyk, who also plays Sherlock Holmes, is totally obsessed with all things Sir Arthur Conan Doyle, characterized by the talented Austin Durant. Doyle, of course, created, one of the most famous literary characters of all time. Green is doing research on a book covering the life and times of Doyle, detailing the circumstances under which this incredibly successful author lived. He is determined to hunt down a box that is rumored to contain letters written to Holmes by fans seeking all sorts of advice as well the scribe’s original writings, and other memorabilia. But be forewarned. Something is afoot as poor Mr. Green becomes the target of an assassination for reasons that still remain a mystery. Hence, the title “Mysterious Circumstances.”

As a result of Doyle’s series of books, Sherlock Holmes becomes bigger than life, with rumors circulating that the character might actually be a real person. Fan clubs sprouted up, one of which was called “The “Sherlockers.” Tired of all things Holmes, Doyle decides to kill him off by having him go over a waterfall in the northern Swiss Alps. A hue and cry springs up with people demanding that the super sleuth be brought back to life. Even the Prince of Wales writes a letter asking that this famous detective be resurrected. There is a candle-lit scene wherein Doyle systematically burns a bunch of papers which we are to assume are from the next installment where Holmes is dead. Where is the box you might ask? It is in safekeeping with his aging, wheelchair-bound daughter Dame Jean, beautifully played by Helen Sadler who, like the rest of the cast, plays multiple roles. In my opinion, she is the only member of the cast who endowed her different characters with specific physical and vocal characteristics that set each one apart from the other. Now, what would Holmes be without his ever-devoted sidekick Watson, played by Ramiz Monsef, who also plays multiple roles. The other cast members playing different characters include Hugo Armstrong as The American, John Bobek as Chester, and Leo Marks as Smith.

Now to the problems: Mitnick’s script is riddled with endless monologues, which in many cases do not drive the action forward, but instead, foists upon the audience, words, words, and more words beginning with the opening monologue by Tudyk as the writer Mr. Green. You might get the idea by now that the action moves back and forth between the present and the past where the actors make speedy costume changes to become another character. For example, the writer, (Alan Tudyk) who, upon donning a hat and a cape, morphs into Sherlock Holmes. The scenes move back and forth between the writer and his friends, or scenes with Holmes and his daughter, or scenes with Holmes and Watson. If you’re confused, you’re not alone, as it was not easy to follow the parade of different characters. A flow chart would have been helpful.

Regarding the double and triple roles the actors played, one wonders why in a city like Los Angeles, which is overflowing with actors who would give up their day jobs to be in a play, that these multiple roles could not be filled with additional actors, which would have avoided a lot of confusion and split-second costume changes. That said, I would be remiss if I didn’t praise the ensemble for their highly professional, polished performances which, coupled with the eye-popping set, might be worth a trip to the Geffen Playhouse.

By Beverly Cohn July 6, 2019
in Life and Arts
Related Posts