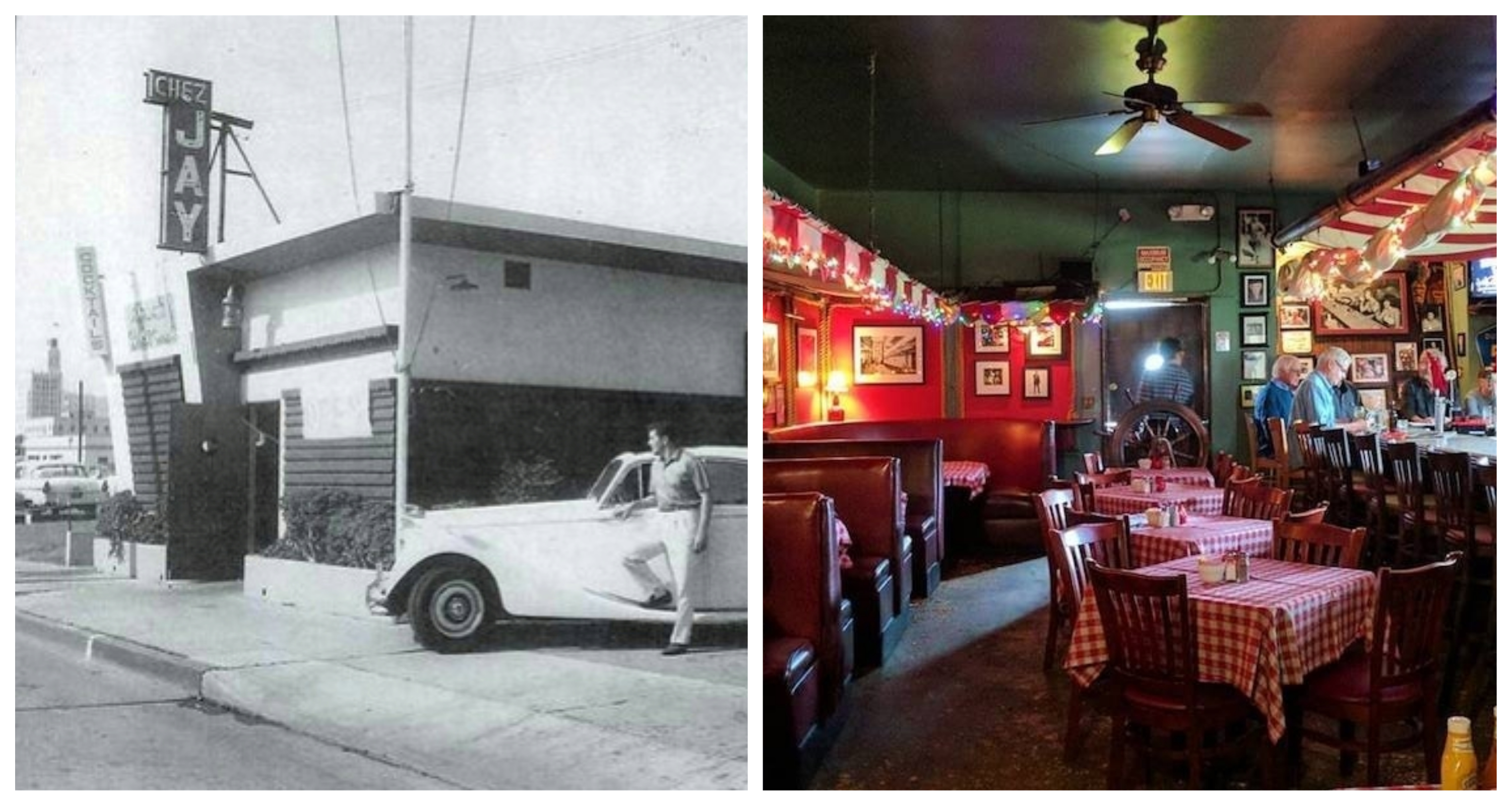 I love restaurants with a story, a history. They are a few that I love in the LA area, like Musso and Frank, Philippe the Original and Santa Monica’s oldest restaurant, The Galley. Including in this venerable list is Chez Jay.

Located on Ocean Avenue in Santa Monica, Chez Jay has been serving locals, celebrities and visitors since 1959. Owners tell me they are known as a celebrity hang out, a “dive bar” and a “classy joint.” I know Chez Jay for its flawless martinis and succulent lobster tail. Back in the 90s, I knew it for its raucous bar scene one night.

Celebrating its 60th anniversary, Chez Jay is named after its founder, Jay Fiondella. One day in 1959, Fiondella, then an aspiring actor and bartender on the Santa Monica Pier, was having an early morning breakfast at a café after a particularly wild night of partying. The café owner offered to sell it to Jay for $1 and Chez Jay was born.

Celebrities are not the only famous entities that are a staple of the joint. Chez Jay’s free peanuts are infamous. One of Chez Jay’s peanuts went to the moon, and became, as Jay called it, the first “Astro-nut!” That peanut still resides in the family’s safe.

My first visit to Chez Jay was back in early 1990s, about 26 years ago. It was a Friday night, and the place was at full blast. Photos of famous patrons and Jay’s “loot” from his many travels were hung everywhere. Music was playing from the vintage Jukebox, (the relic still plays oldies from the 60s and 70s). An eclectic crowd filled the bar area, getting louder by the minute as they downed beers, scotch, martinis and other favorite alcoholic beverages.

My girlfriend and I slid up to the bar stools, took our seats and ordered a drink. Before we knew it, guys were buying us shots — of Tequila. Some time later, I walked out of the place. Kind of. I was seeing double, I think. Good times! Ha ha.

Some 15 years later, I was with some business associates, celebrating my birthday. By then I had given up drinking shots, getting drunk and staying out too late. My attention was on the menu. I was impressed. Steak, lobster, sand dabs, shrimp, pastas. Even one of my all time “faves,” steamed clams!  And they are all divine, prepared to perfection. YUM.

The other cool thing is that unlike the “tragically hip” newer restaurants, the main order comes with a crunchy green salad, fresh vegetables and a starch, like baked potato with all the “fixins,” including sour cream, chives, bacon bits and butter. The cost of that meal was around 35 bucks. The owners tell me that you can get steak and lobster for $44.

Jay Fiondella died at age 82 in 2008, with longtime partner Mike Anderson continuing day to day operation. Recently, Mike’s son took over as manager. In recognition of its long and storied history, Chez Jay was declared a Santa Monica Landmark in 2012. There’s also a plaque in the front, near the entrance, that says, “In memory of Herb Katz” to mark the life of City Councilman Herb Katz, who was a huge supporter of Chez Jay. Katz died in 2009.

Owners are now looking to the future, expanding Chez Jay to include “Jay’s Landing,” a patio located at the edge of fabulous Tongva Park. “Jay’s Landing” will have its own separate menu – small bites designed to be enjoyed on the patio or to take out and savored while on a stroll in the Park. Watch for the grand opening in late summer!