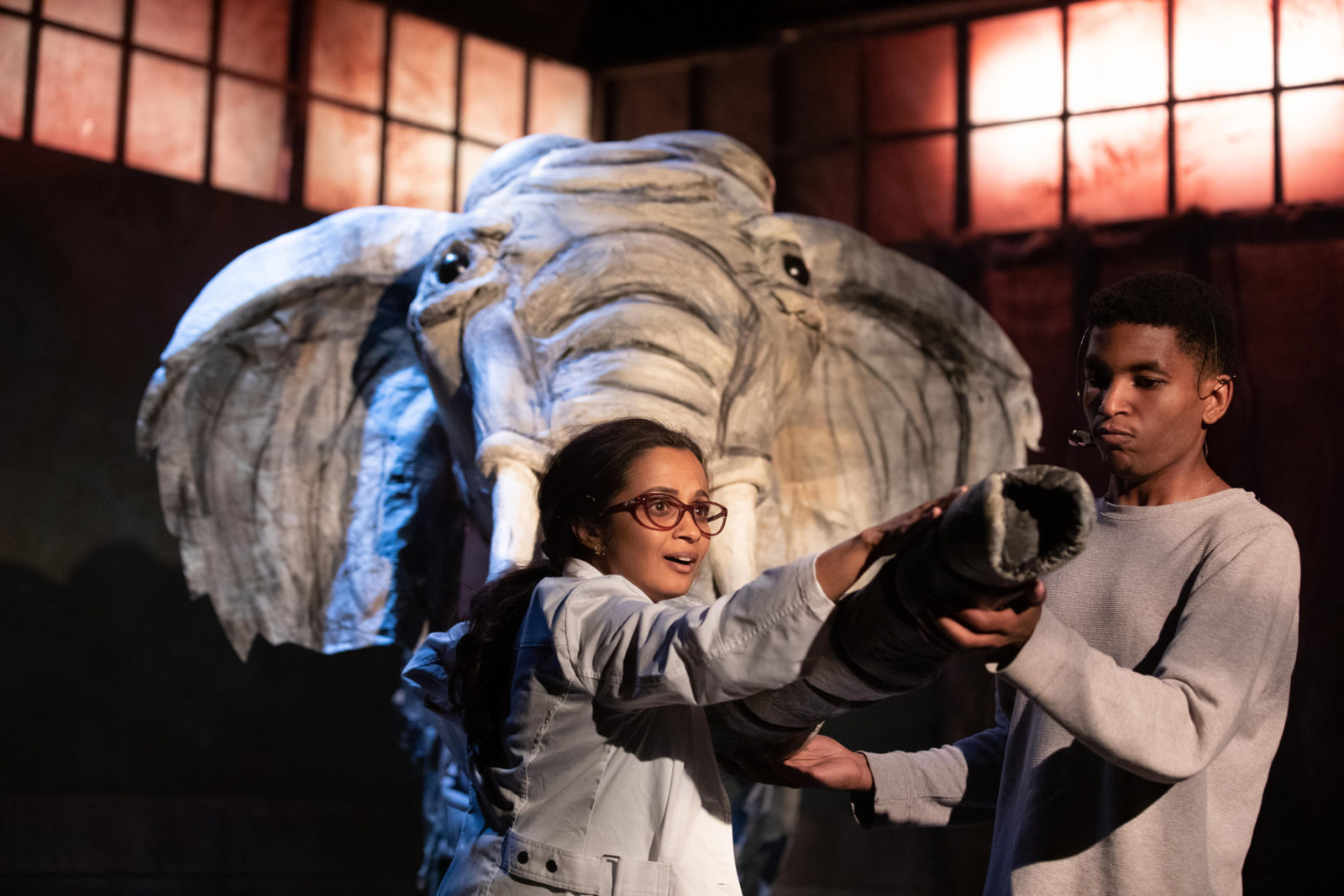 Diversity in casting has always been a strong point of Rogue Machine’s productions, but including an elephant in the ensemble of Bekah Brunstetter’s MISS LILLY GETS BONED took the tradition to a whole new level. “It just says Elephant in the script,” explains Brunstetter. “I didn’t limit the creative team, I wanted to trust the designers, actors, and a director to figure it out however they saw fit. It’s tough to let go of that because the less specific you are, the more you run the risk of not getting exactly what you want — but also, there’s a greater chance of the ‘magic of discovery,’ so that’s a risk I’m willing to take with this play. Elephants are so beautiful, even in puppet form, or projection, or…whatever a talented designer may create.”

The Elephant joined rehearsals during “tech” week. This logistical challenge was solved by Mark Royston and Sean Cawelti, two of those talented designers that Brunstetter had just trusted would appear and ‘figure it out’ when it was time for her play to be staged at Rogue Machine. You may remember her name from last year’s sold out run of The Cake (Echo Theater Company, Manhattan Theater Club, Spring 2019), which took LA by storm with its look at parity vs. prejudice when a baker refuses to fill an order for a gay couples wedding cake. Or perhaps you’ve noticed her name in the credits of NBC’s “This is Us” for the first three seasons, MTV’s “Underemployed,” or Starz’s “American Gods.” Regardless, Los Angeles audiences will get another chance to see this writers’ flair for creating engaging stories that leave behind intriguing questions in their wake.

Multi-award winning director Robin Larsen (“so many superlative local productions” – Hollywood Reporter), who has earned the Ovation award and Los Angeles Drama Critics Circle awards more than once, has identified at least one of those questions. It provokes pondering if whether or not, “people are inherently good? Or are we just animals? What happens when chaos is unleashed, and we’re pushed to the point of breakdown?”

Rogue Machine’s Producing Artistic Director John Perrin Flynn says, “We do plays that are new to Los Angeles, and some of those works are developed by us. They are often very funny but we choose plays that address what is happening in the world. Our theatre mirrors and examines contemporary culture and nurtures contemporary playwrights. We believe that art is an important part of community and theatre is dialogue that promotes conversation. Producer Andrew Carlberg adds, “As part of that conversation, we think that this particular play will connect well with our community. Bekah’s voice is singular and she has the brilliant gift of being able to make one laugh through their pain.”

Definitely not a play for children, but Miss Lilly Gets Boned is drawing a lot of interest from adults. Harold the elephant seems to be a big part of the attraction.

Sex, faith, and violence are all part of the intricate package of connections that you will experience in Miss Lilly Gets Boned. Bekah Brunstetter imaginatively explores the tenuous and permeable boundaries that separate our civilized side from our more animalistic one, and the ways that faith can limit or uplift humanity. While a captive elephant grows ever more anxious in chains, a virginal Sunday school teacher takes a big chance, by opening her heart to the dangers of love.

Kind of like life, things get a little messy sometimes. But, isn’t that all part of the fun of it?

By admin September 30, 2019
in Life and Arts
Related Posts