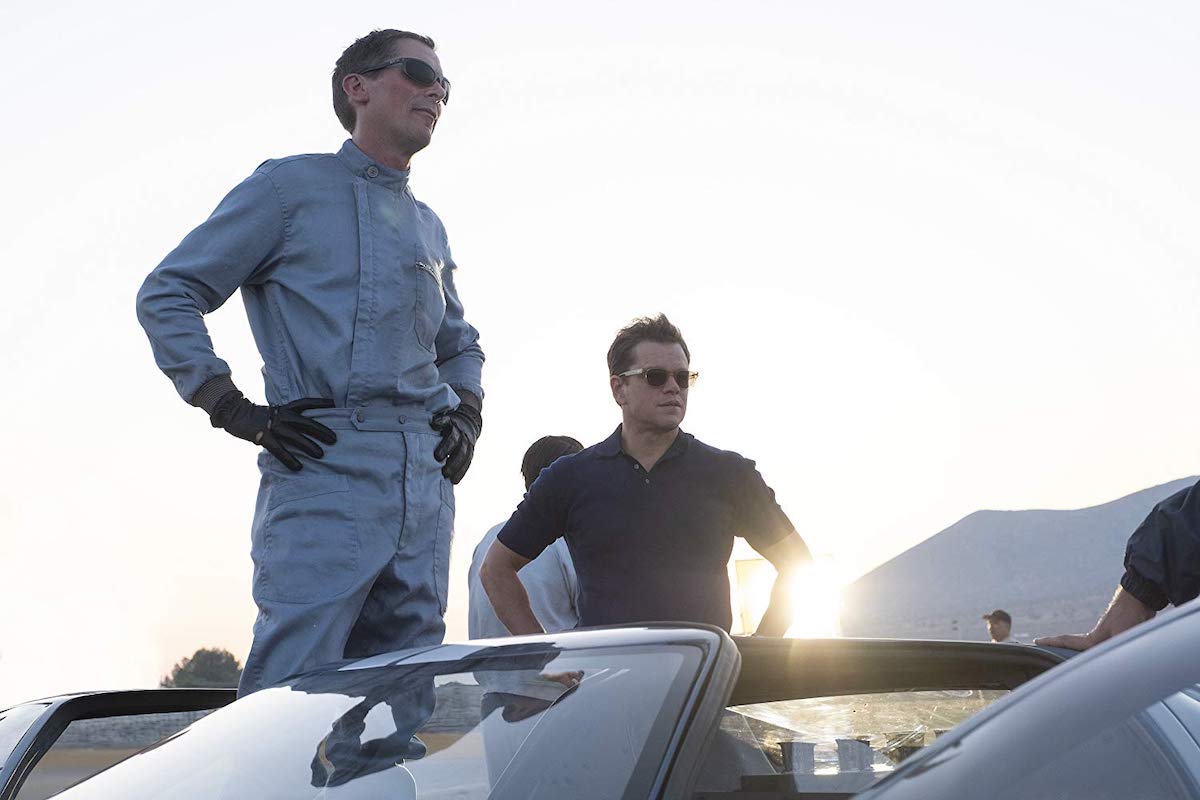 I have to admit that I’m a biased viewer of “Ford v Ferrari”. Although I’ve never been a fan of watching car races (boring), I have often raced cars in my dreams. I love the feeling of moving oneself at speeds that can only be reached with the help of engineered machinery. When I was 21 I saved up and bought a used British sports car, a Sunbeam Alpine. I loved that car. To me, this movie is a 2½-hour thrill ride behind the wheel of a powerful sports car. The racing scenes are extraordinary – you actually feel yourself gripping the wheel, moving the gears at just the right split second to get maximum speed, and the beautiful exhilaration of flying smoothly through space as if picked up by a gust of wind. In this movie, as director James Mangold states, “The cars were their own characters.”

Matt Damon shines as legendary driver/designer Carroll Shelby. Racer Dan Gurney’s youngest son, Alex Gurney, portrays his own Dad. The real Lee Iacocca, who unfortunately passed away a few months before the release of this film at the age of 94, is played by Jon Bernthal. Caitriona Balfe is perfectly cast as Mollie Miles, and shows her great strength, intelligence and power. She is able to provide just the right touchstone for her unpredictable, wild husband.

Christian Bale reinforces my belief that he is one of the best actors who will ever grace the screen. He becomes daredevil Ken Miles, the British racer who had an uncanny ability to feel the balance that exists between driver, machine and speed. The story stays true to real details of Miles’ later life. He was born in Birmingham England just after World War I, raced motorcycles as a young man and drove a tank in World War II. In the mid 1950’s he moved to the US to develop racecars and enter races himself. Incidentally he developed a racecar in the early 1960’s called the Sunbeam Tiger. My Sunbeam Alpine was a lower priced version of that car, which the British Rootes Group bought from Miles.

What you will take away from this film is Bale’s performance. This extraordinary actor captures the manic energy and razor sharp intelligence and intuition of this working class Brit who came to America to pursue his love of racing cars. Bale had to lose seventy pounds from his role as Dick Cheney in “Vice”, before filming began. He also spent six hours a day for a week at Bondurant High Performance Driving School owned by former racer Bob Bondurant. Even Matt Damon was impressed with Bale’s “monk-like” discipline. That focus is something that Bale uses for his character. The acting, the camera work and the editing on this film are superb. If you’ve ever even driven a car fast, even just to pull away from the rest of the traffic, you will find the experience of watching this film exhilarating. If you’ve ever raced anyone in a car, especially in a sports car, you will relive that thrill.