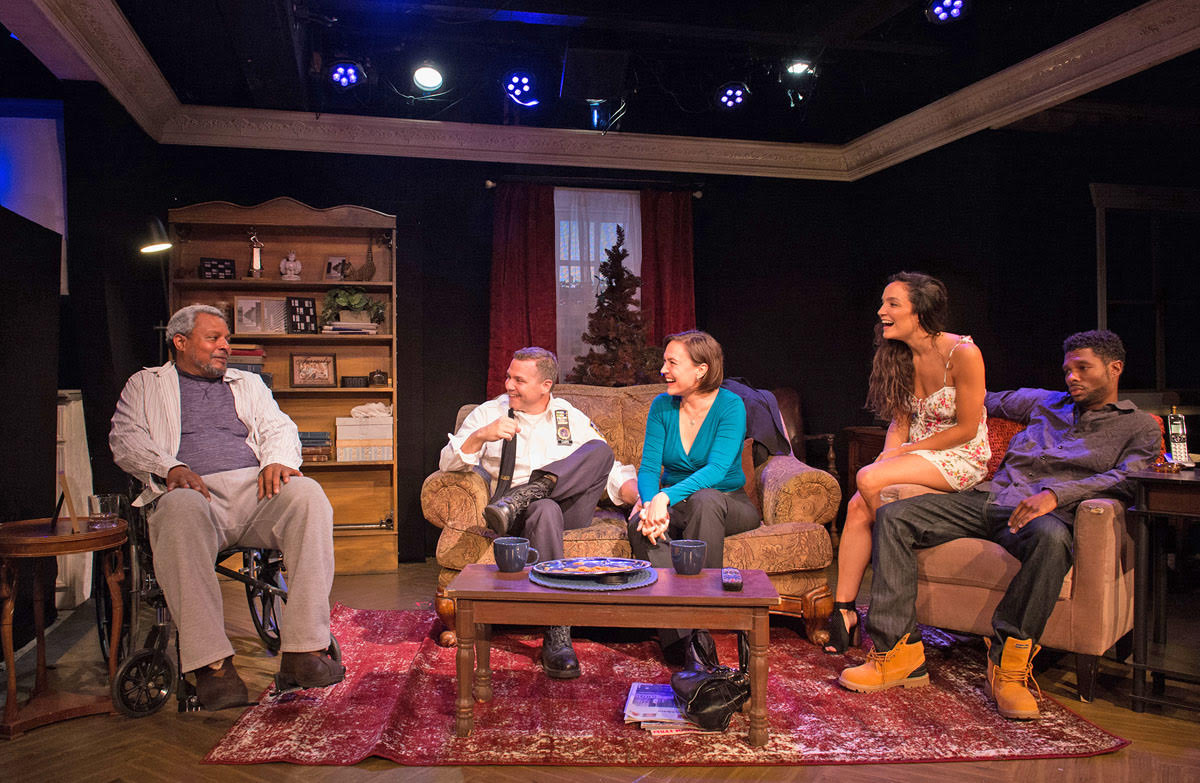 One can pretty much count on outstanding theatrical presentations at the award-winning Fountain Theatre. The latest production to grace its busy stage is the Los Angeles premiere of Stephen Adly Guirgis’ Between Riverside and Crazy, his multi-award winning play, including the 2015 Pulitzer Prize for Drama.

The storyline in this talented playwright’s tightly-written script, which is skillfully directed by Guillermo Cienfuegos, revolves around the central character of recent widower and retired cop Walter ‘Pops’ Washington, brilliantly played by Montae Russell, who gives a highly actualized sub-textual performance as a man beset with almost an unmanageable set of life’s circumstances. First, he refuses to settle a lawsuit with the city emanating from being shot six times by a rookie cop outside a very undesirable bar, which as an off-duty cop, he probably should have avoided. While riddling Walter with bullets, the rookie let loose a string of descriptive epithets, directed at Walter’s African-American heritage. The lawsuit has been ongoing for decades, but Walter, who was on the force for 30 years, refuses to settle on the grounds that he was shot because he’s black and the financial settlement is less than the amount he wants. In an effort to blackmail him into signing off on the settlement and Confidentiality Agreement, Walter, who spends his time sitting in his late wife’s wheelchair and drinking heavily, is threatened with losing his rent-controlled Riverside Drive apartment, nicely designed by David Mauer. At this point, he is impervious to threats and really doesn’t care.

As if dealing with his own predicament wasn’t enough, living with him now is his son Junior, well played by Matthew Hancock, who is newly released from prison for probably selling “hot” merchandise. Junior’s girlfriend Lulu, played by Marisol Miranda, also lives in Walter’s apartment along with sad sack Oswaldo (Waldo), who is brought to life by Victor Anthony, who captures the struggles of a recovering addict trying to stay clean and sober. He has just received his 90-day sobriety chip, which he wants to share with his estranged father, an attempt that results in a sad, violent outcome. Marisol’s performance did not rise to the polished theatrical level of the rest of this highly professional cast as although she is clearly “eye candy,” her acting did not leap over the “footlights” and would be more suited to television or film.

Out of respect, everyone refers to Walter as “dad” who is basically a foul-mouthed, cynical, angry man who still hasn’t gotten over the death of his wife Dolores. Perhaps sitting in her wheelchair makes him feel closer to her as he downs drink after drink, beginning with whiskey in his morning coffee, without any outward manifestations of being drunk, which is not unusual for alcoholics. As is somewhat customary for recovering addicts to pick a healthy “addiction,” at the top of Act I, Waldo does a long dissertation on the merits of eating good food, pointing out to Dad the dangers in eating non-organic food. Dad is duly unimpressed and has no intention of altering his eating habits. In an unexpected visit, his ex-partner Detective Audrey O’Connor, played by Lesley Fera, shows up with Lt. Dave Caro, both of whom, thanks to the excellent script, and spot-on directing, create interesting characters who keep their hidden intentions under wraps – at least for a while.

The last character to arrive is the Church Lady, extremely well played by Liza Fernandez, who mines the different aspects of her unpredictable character. She is ostensibly visiting Walter to minister communion, but in an hysterical transition from soft spoken lady of God, to seductress, administers communion in a most unorthodox method which, under old circumstances, would call for smoking a cigarette afterwards. Poor Walter. It’s all too much for him and results in a health issue, followed by yet another visit from his ex-partner Audrey and her now fiancée
Lt. Caro, who graced his girlfriend’s finger with a huge diamond engagement ring. It seems there’s more at stake for the good lieutenant than meets the eye. By now Walter is exhausted and they are wearing him down to sign the papers. He may be sick but he’s not stupid and realizes there must be something big at stake for the good lieutenant and cleverly lays out the rather unusual terms under which he will sign off on the lawsuit. At first the dynamic duo thinks he’s kidding, but he’s not, and our dear Walter gets the last laugh after all.

With regard to the production values, augmenting David Mauer’s excellent set design, are Matt Richter’s lighting, Shen Heckel’s set decoration, and Christopher Moscatiello’s sound design, all worked together in what technically unfolded on stage.

Although laugh lines abound in this two-act play, I would not characterize it as a comedy as it deals with profound issues of the human condition. A more accurate term would be a “dramady,” which is what the word sounds like, a drama infused with comedy.

By Beverly Cohn November 5, 2019
in Life and Arts
Related Posts