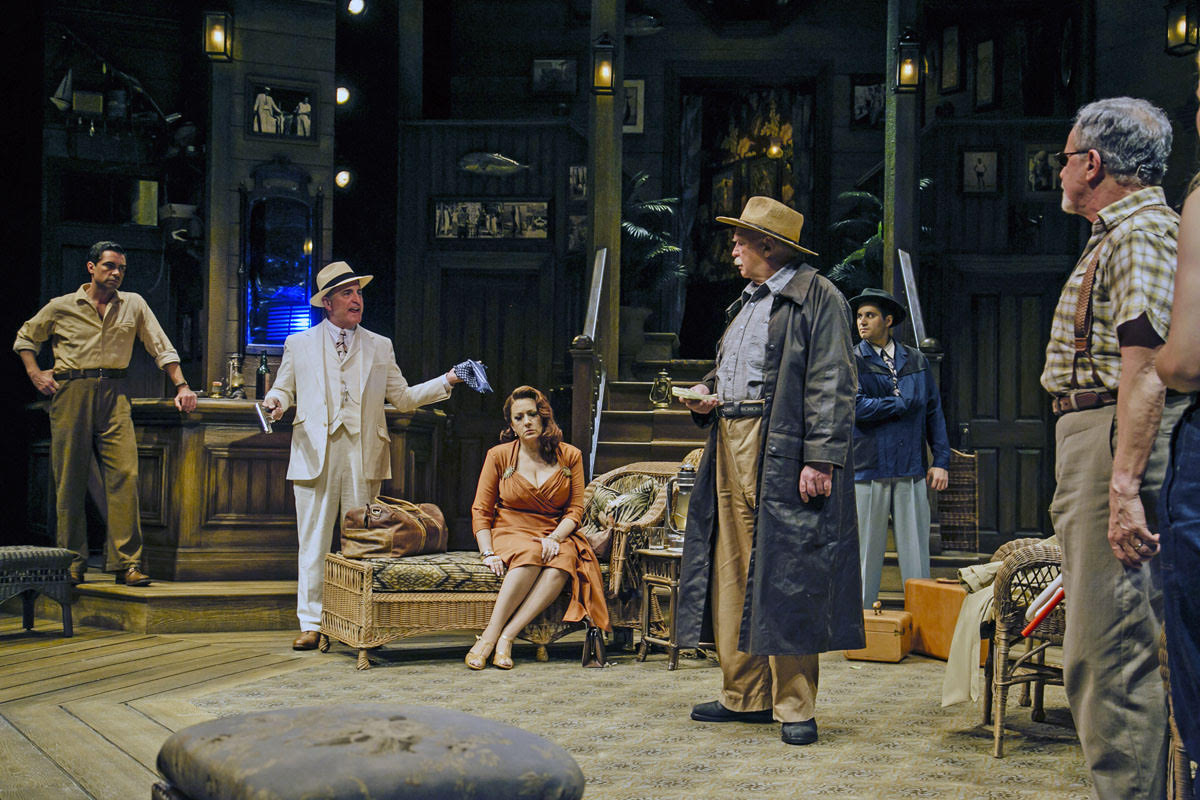 The first time I saw Andy Garcia was in “The Untouchables” I was mesmerized by his acting and powerful on-screen presence. I made a note to myself that he was a young actor destined to become a major movie star and, indeed, he has. With dozens of movie credits going back to 1984, there are too many to list but here are a few of my favorites: Mamma Mia! Here We Go Again, Book Club, Kill the Messenger, Rob The Mob, At Middleton, City Island, Ocean’s Twelve( and Thirteen,) Smokin’Aces, When a Man Loves a Woman, The Godfather, Part III, and Internal Affairs. So, it was with great anticipation that I was going to cover Jeffrey Hatcher and Garcia’s adaption of the 1948 film noir version of Key Largo starring the incomparable team of Humphrey Bogart and Lauren Bacall, as well as super bad guy, Edward G. Robinson. It was directed by John Huston, who changed the original story of Maxwell Anderson’s 1939 play, which centered around the Spanish Civil War.

Presented by the Geffen Playhouse, Warner Brothers Theatre Ventures, in association with Frank Mancuso, and Andy Garcia, there is nothing overtly wrong with the play. The casting is excellent, beginning with Garcia in the lead role of Johnny Rocco, a bad guy who was deported to Italy for a year and a day, but sneaked back to America via Cuba and was now running a drug cartel. Played out on set designer John Lee Beatty’s sprawling, incredibly detailed period set of the hotel lobby, which was perfect for the ensuing unfolding drama. The hotel is closed for the winter and is occupied by caretakers blind Mr. D’Alcala (Tony Plana) and his widowed daughter-in-law, Nora D’Alcala (Rose McIver). While a full-blown hurricane is brewing, the hotel has been taken over by Rocco and his gang.

Curly (Louis Mustillo) and Toots (Stephen Borrello) are the boss’s henchman who keep Nora and Mr. D’Alcala at bay. Also present, is Gaye Dawn, Rocco’s girlfriend exquisitely played by Joely Fisher. Gaye is a former entertainer but has turned into lush and is treated very poorly by Rocco. She gives one of the best, heart breaking performances of the evening when Rocco forces her to sing for a drink that she desperately needs.

Rounding out the cast is the very talented Danny Pino as the troubled, brooding Frank McCloud who was a captain during World War II and has been traveling around the country to talk to parents of soldiers killed in combat. Mr. D’Alcala’s son served under McCloud’s command but made a decision to counter his captain’s orders, which had tragic results. We don’t exactly know what’s wrong with McCloud as Pino keeps that sub-text well under wraps. Now, what would a town be like without a sheriff? Well, Richard Riehle does an okay job as the corrupt Sheriff Gash who has no compunctions about taking a bribe here and there. Finally there’s the character of Ziggy, well played by Bradley Snedeker, who brings a bit of much needed levity to the proceedings. This snappy, handsome dude is a drug dealer who drives down to Key Largo during the raging hurricane for a drug buy from Rocco. Carrying a suitcase filled with money, on seeing the young Nora and blind Mr. D’Alcala quips, “Is this the new gang? They look pretty tough.” Let’s just say there’s an unexpected twist to the quarter-of-a-million dollar cocaine transaction.

There are confrontations between McCloud and Rocco, which included pistols and an undeveloped relationship between McCloud and Nora to whom Rocco has taken a fancy. Rocco, with all his bluster, is actually afraid of thunder, which could tarnish his tough-guy image just a bit, and makes him human instead of a cliché characterization of an Italian gangster. Mahem ensues and there’s lots of unconvincing shooting. All this action takes place during an increase in the hurricane’s ferocity, beautifully replicated by Alex Hawthorn’s thunderous sound effects, including the sound of a buoy being tossed around in the water or hearing thunder or seeing the pouring rain through a window and the skylight. Peter Kaczorowski’s lighting design, and Linda Cho’s costumes, especially those nifty suits in which she dressed Garcia, are both outstanding. Rounding out the excellent production values are Kaitlyn Pietras and Jason H. Thompson’s projection designs, and Arturo Sandoval’s music, all working together for a satisfying audio-visual experience.

Again, there is nothing terribly wrong with this production. All the technical elements are outstanding, as well as a highly professional cast, but Doug Hughes’ direction left a number of dead spots both in some of the stagnant blocking and uneven pacing. There are no particularly strong highs or lows but all this said, seeing Andy Garcia, Danny Pino, and Joely Fisher deliver strong performances makes this re-imagined production of Key Largo just a tad short of spectacular, but definitely worth a trip to The Geffen Playhouse.

By Beverly Cohn December 7, 2019
in Life and Arts
Related Posts