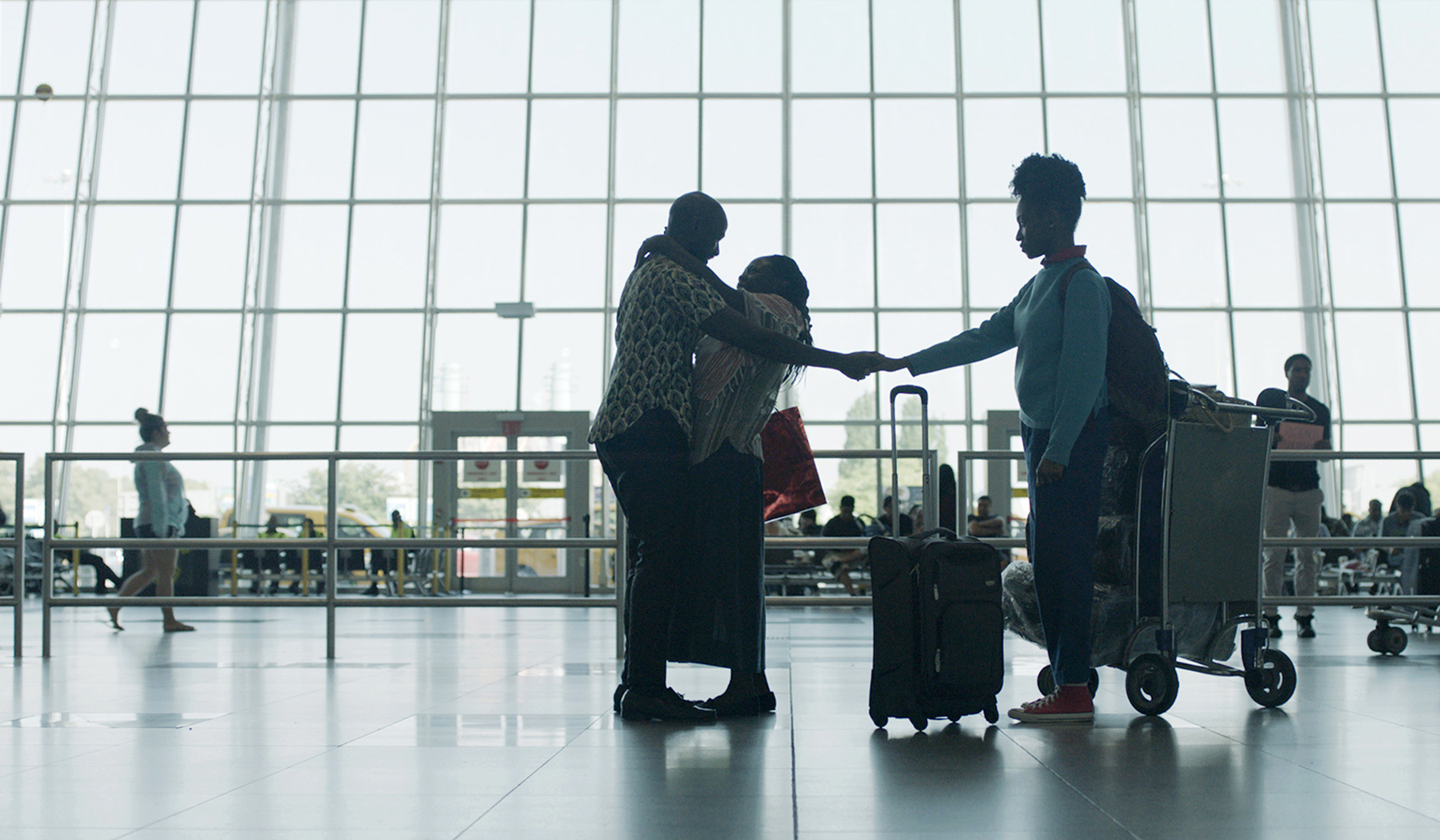 The word “auteur” is reserved for those filmmakers who have distinguished themselves through their work. Among those directors who have earned that coveted recognition are, Gus Van Sant, Christopher Nolan, David O. Russell, Woody Allen, Robert Altman, Martin Scorsese, Terrence Malick, Pedro Almodóvar, and Quentin Tarantino. Tanzanian-American Ekwa Msangi makes her directorial debut with her perfect script Farewell Amor. If this film is an example of her talent, and future works bear her signature, she is certainly destined to join those ranks.

A tender story about an Angolian immigrant family facing new beginnings, the film is essentially a three-hander, with the finely fleshed out characters brought to life by the stirring performances of the principal actors. It’s time for rediscovery and director Msangi divides the film into three segments to reflect the adjustments each of the characters is trying to make. The first segment focuses on Walter, amazingly brought to life by Ntare Guma Mbaho. He left his wife and daughter in Angola 17 years ago to escape the civil war. Since then, he has been working as a cab driver earning just enough money to pay for his living expenses, including rent on his claustrophobic Brooklyn apartment, sending whatever is left to his wife. The time has finally come when all the immigration red tape has been met and his family can now join him. His wife Esther, played by Zainab Jah, embodies the complexities of her character, and arrives at La Guardia Airport with their daughter Sylvia, played by Jayme Lawson. There is an awkward greeting between them for they meet again almost as strangers and before long they find themselves caught between two cultures. As the newly arrived immigrants take their first ride through the busy streets, cinematographer Bruce Francis Cole captures both the grittiness of New York as well as the wonder reflected in the eyes of these newcomers.

At the family dinner that evening, Esther insists that they say grace first and Walter begins to get a glimpse of how deeply religious she is, which began when she fled to Tanzania. Confessing that she’s been celibate since they separated, that evening there is an attempt at lovemaking, but Walter is clearly conflicted and turns his back away from her. Religion is deeply entrenched in his wife and she would rather go to church than enjoy a family outing. He tries to accommodate her wishes, but clearly is having difficulties and doesn’t participate in singing the hymns. Other forbidden things on her list include drinking wine and dancing, both of which he has been enjoying. Osei Essed’s lively soundtrack is a wonderful blend of African roots music as well as popular American selections. With his powerful inner life and spellbinding understated performance, at one point, Walter sniffs something from a bag hidden in a closet and without a word, we realize that there is another woman in his life. He subsequently throws the bag in the trash and continues to remain present and distant at the same time. At one point his daughter says, “Poppa do you love us?”

The next segment is from Sylvia’s point of view. On her first day at school, she meets fellow student D.J., nicely portrayed by Marcus Scribner. He grew up in the south without a father, and on discovering that she likes to dance, suggests that she try out for the Step Team. Her first new friend walks her home and when Esther sees him in their tiny apartment, she forbids her to have friends or dance, forcing her to kneel and pray for forgiveness. At school, Sylvia injures her hand and Walter takes her to the hospital. While waiting, he shares how he and her mother met at university and what great times they had dancing together. Sylvia doesn’t understand why he didn’t send for them sooner and he answers,“red tape.” He also explains that “This country is very hard for black people and dancing is the one place I can show myself,” encouraging her to dance. There is a quiet exchange between Walter and the nurse Linda (Nana Mensah) and we begin to understand exactly who she is and his struggle to let go of that relationship, one that has been loving and supportive.

In the segment devoted to Esther, we see her slowly uncovering his secret as mail addressed to Linda keeps arriving. She spends most of her time cleaning, cooking, and talking to her sister back home, who advises her to increase her donations to the church, and they pray together over the phone. Esther finally confronts her husband about Linda and he replies, “She gave me hope.” We begin to understand that although Walter was in this loving relationship, he is committed to his wife and daughter. In an effort to discuss everything, he takes his wife out to dinner in a beautiful restaurant. She bought a new dress and looks lovely, exuding a softness we haven’t seen before as she comes off as pretty unlikeable. They discuss their past and what takes place is surprising and either you will smile or shed a tear or two.

Farewell Amor could have easily slipped into a soap opera, but the finely honed script and razor-sharp, but gentle directing, resulted in an unforgettable family drama, illuminating aspects of the universal human condition and the inherent challenges therein, including sacrifices for the greater good. While all the performances are fully realized, Ntare Guma Mbaho Mwine’s totally internalized characterization of Walter is spellbinding and we must patiently await his next role and what awards he will garner. As far as the title Farewell Amor, that could have several interpretations. What do you think?

By Beverly Cohn December 14, 2020
in Life and Arts
Related Posts