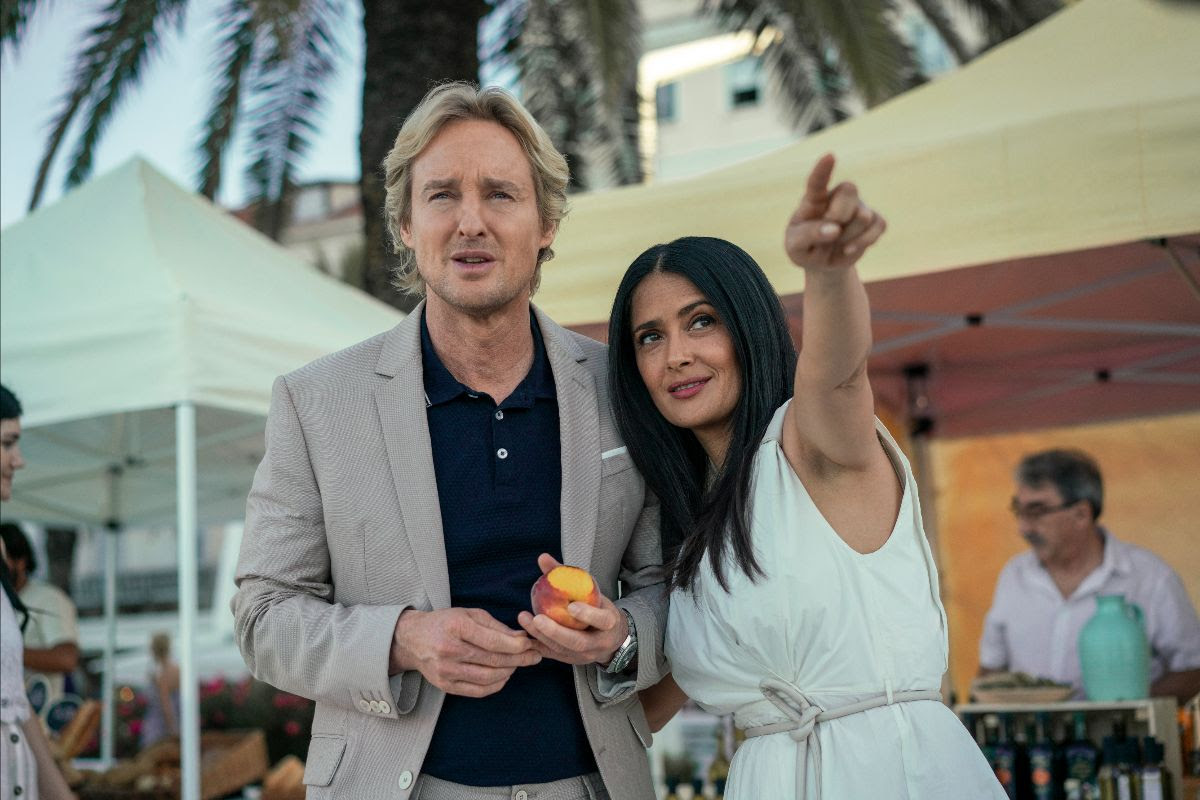 Do you find that when return home from travels to another place, you are able to more clearly see the day to day world that you live in? This is the underlying concept of Bliss, and certainly a theme that should play out beautifully in cinematic literature. In this film, director/writer Mike Cahill takes the concept and runs with it, in loops, circles, through different dimensions. The main thread of the movie keeps getting pulled out from under you like an unraveling sweater.

You will tend to be as confused as the main character, “Greg Wittle,” who is played earnestly and thoughtfully by the always-fascinating Owen Wilson. The main reason to spend 103 minutes with this movie is to watch the performances of Wilson and of Salma Hayek, whose character, “Isabel,” is a tour guide of sorts, on this tangled deconstructed trip through layers of existence. Nesta Cooper as Wittle’s daughter is excellent as well.

Deconstructed, the film has some exquisite scenes and wisps of great dialogue that rise out of nowhere and then are gobbled up by the ether. “I don’t know if it’s real. It has a feeling…the feeling’s real,” Greg muses. Wilson is at his best when he is allowed to show the vulnerability of his character. He is a tightrope walker on the thin line between comedy and tragedy. Wilson’s performance transcends the flatness of the movie in flashes. He brings the feeling to the film, but it’s not enough to pull the whole movie together. There is a scene toward the end of the film, a continuous long shot, where he walks silently through a homeless encampment and his face shows disbelief, fear, and the acknowledgment that he might be a part of this world. Had director Cahill used the emotional quality of this scene as a definitive style for the film, it might have worked.

The relationship between Greg and Isabel seems strangely distant. There is a discernable disconnect between the two which I believe is deliberate. Greg is having trouble finding a commitment to being in this universe, and they are isolated from the worlds they inhabit. Therefore an emotional gap exists between the two.

Since Cahill meant to leave the audience with a dilemma about which world was real, the elite environment should have been rendered in more detail. The bright sunlit world could have been more emphatic if the venue had more of a spacious, peaceful feeling. The Sci-Fi scenes were simplistic and childlike. The director could have used the power of cinema better to envelope his audience in the experience of both worlds with a consistent style. There is satire in the beginning, in that Greg works at a “help desk” company called Technical Difficulties, but that ironic theme is not carried through the story. The film’s visuals, sound and editing barely touched the visceral emotions we should be drowning in. It’s missing an extraordinary sound track and score. However Bliss has its merits.

“I feel like Salma is the storm,” says Cahill. “And Owen is the life raft. He’s the surfer in the storm you want to hold on to, as it’s going through this crazy chaos.” Wilson believes that the meaning of the story “depends on who watches it.” He believes that his character teaches us “that you have to respect other people’s choices of reality,” that we’re not living in different dimensions but we all have different definitions of “reality,” of “ideology.”