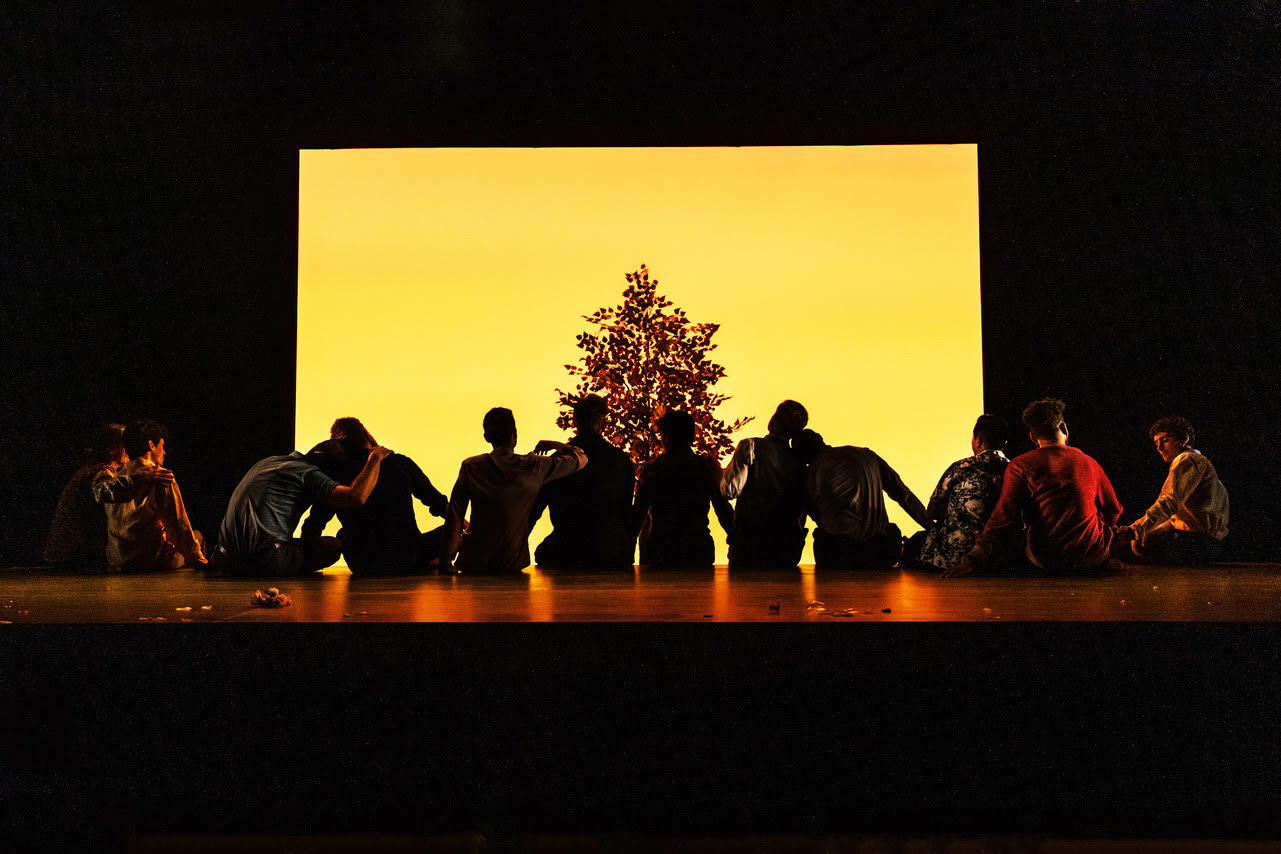 The West Coast premiere of the internationally acclaimed “The Inheritance,” Matthew López’s six hour and 25 minute sprawling play, generally presents Parts 1 and 2 at two different performances. However, it was given special treatment for a special audience by presenting it in its entirety. This unforgettable play, on stage at the Geffen Playhouse, was inspired by E.M. Forster’s “Howards End,” and personifies the brilliance of a theatrical production. Beginning with Lopez’s tight, fascinating script, Mike Donahue exquisitely directs the principal characters, as well as the rest of the talented ensemble, a Greek chorus watching and reacting to the fascinating unfolding story. This is a penetrating work of art which explores being a 21st century queer man in New York City post AIDS epidemic and has been dubbed “The most important play of the century.” You might be wondering how the audience sat for so many hours. At the haunting conclusion of Act 1, we walked across the street for a picnic where we were wined, dined, and socialized. I was happily looking forward to Act 2. I have to admit I was a bit concerned about sitting for over three hours but the riveting first act flew by and it was hard to believe that three hours and fifteen minutes had elapsed.

The beginning: As the audience settled into their seats and chatted with each other, the house lights remained on as one by one the ensemble, consisting of handsome, barefooted young men, slowly entered with IPads and pillows and laid down on designer Jaimie Todd’s raised platform set, becoming engrossed in their computers. It’s a writing class being run by a Morgan (Bill Brochtrup). The subject is writing a story on “The Men I Loved and Friends Who Died.” In this highly stylized production the fourth wall is breached throughout the play with the characters talking directly to the audience, many times using the third person narrative in explaining their lives. We meet the Toby Darling character, (Juan Castano) a highly flawed, but reasonably good writer who has published a book that will be turned into a play. He has been living with his partner, activist Eric, (Adam Kanto ) for seven years and contented, Eric proposes that they marry but Toby declines, “I don’t love you.” There are bruising exchanges between them, “I hate your fuc…ng play.” Eric’s pivotal character breaks the fourth wall frequently, talking about himself again in third person narrative. Next we meet the very handsome Adam, a rich kid living in a luxury apartment and aspiring actor. Played by Bradley James Tejeda, through a bag mix-up, Adam becomes friends with Toby and Eric and eventually makes his ambition to become an actor known to Eric who advises him to speak directly to Toby. Adam auditions and gets the part. Just to be clear, this is not a linear play but instead the action moves back and forth in space and time between the principal actors and the vital ensemble who are totally involved in the story as it unfolds. Eric and Toby have been living in a rent-controlled Upper West Side apartment that belonged to Eric’s late grandmother, paying only $575 a month. He is facing eviction as his lease stipulates he can only live there while she’s alive. Eric meets Walter, also well played by Bill Brochtrup, and they strike up a lovely friendship. His new friend is married to Henry Wilcox (fabulous Tuc Watkins) a restless Republican multi-millionaire real estate developer who travels extensively and appears to have little interest in intimacy. He owns a lovely home in upstate New York and as the narrative progresses, of E.M. Forester’s “Howard’s End” begins to creep into the narrative. Henry has two boys who basically were raised by Walter. We are taken back to the days of the devastating AIDS epidemic and find out that Walter secretly used that house as a haven for sick gays who eventually died.

Following the first act break, the ensemble is back on stage as Toby continues flirting with Adam who removes his clothes. Standing naked the only thing Toby has to say to him is “It looks like you bought your underwear at Costco,” at which point the chorus gasps. The narrative includes stylized re-enactment of sex acts including one that took place in a Czech bathhouse. Poor Walter dies but on his deathbed, he scribbles a note leaving the White Plains house to Eric. Tying again into “Howards End,” Henry and his two sons decide it was not really Walter’s intention to bequeath the house to Eric and burn that piece of paper. We soon meet the character of Leo, a sex worker also played by Tejeda, who brilliantly creates two diametrically opposed characterizations. Toby, who is rather desperate for love, hires Leo to have sex with him paying an extra $100 to say “I love you and another $100 to read him a poem. In the meantime, Eric and Henry have become good friends which is slowly growing into a relationship and eventually the rich Republican proposes marriage to Democrat Eric. The festivities and happiness of the wedding day are temporarily marred as Toby makes a drunken appearance.

Lest you think this play is overly “heavy,” as a tribute to López’s
skillful writing, this award-winning work, illuminating weighty issues facing gays such as relationships, HIV, drug addiction, homelessness, prejudice, etc., is peppered with amusing irony and hilarious one-liners. Coupled with Donahue’s spot-on direction, who weaves all the elements together creating a giant tapestry of multiple stories relating to specific human conditions, there is laughter galore throughout Act 1. Without being a spoiler, I will say that at the end of that act, there’s one of the most powerful visuals of the AIDS epidemic you will ever see.