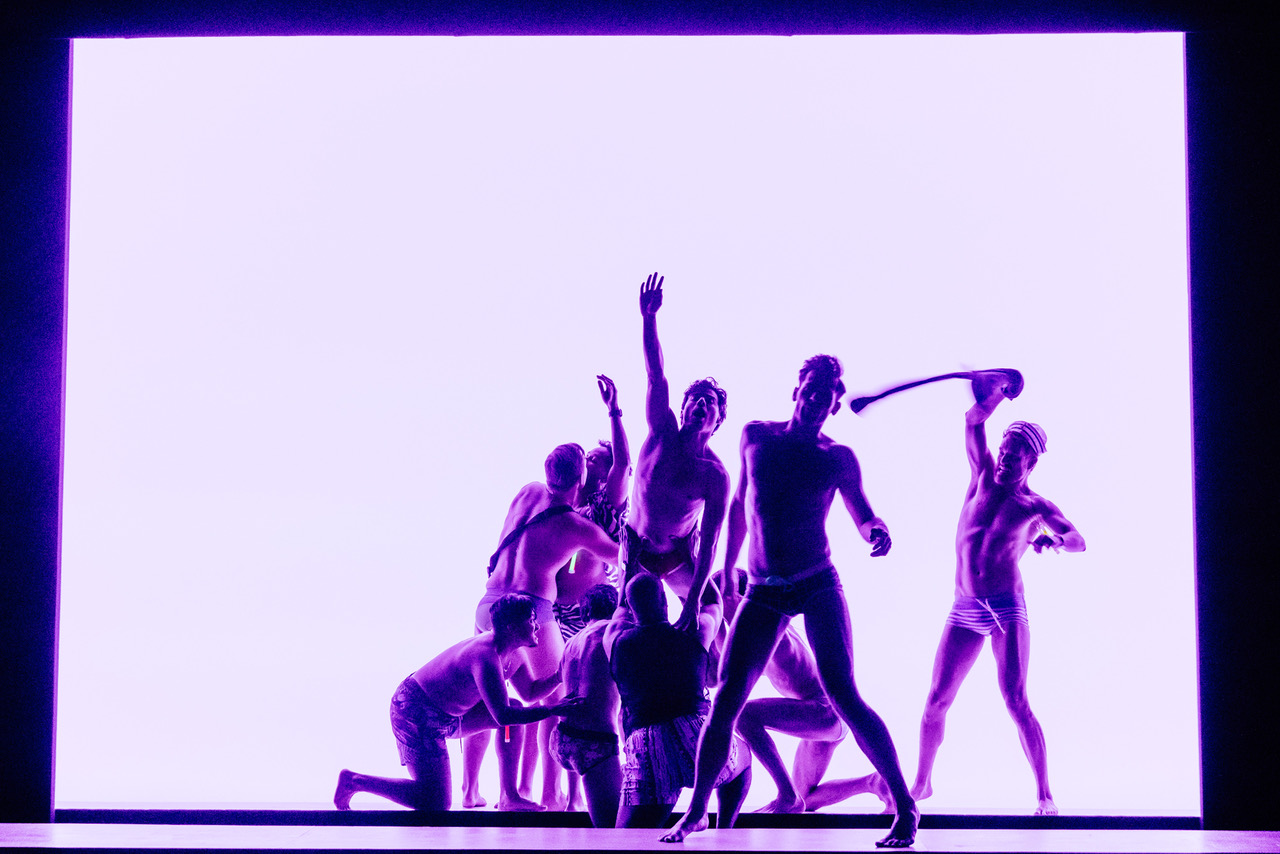 ACT 1 Recap: Under Mike Donohue’s exquisite direction of a sterling cast, Matthew López’s 6 hour and 25 minute sprawling, award-winning “The Inheritance” made its West Coast premiere at the Geffen Playhouse. The following will re-acquaint you with the principal actors, some of whom created two different characters: Bill Brochtrup plays both the E.M. Forster character of Morgan and Walter Poole; Juan Castano characterizes Toby Darling, author and playwright living with his partner Eric Glass, the lynchpin and third-person narrator of the unfolding action wonderfully portrayed by Adam Kantor. Bradley James Tejeda plays Adam, an aspiring actor with whom Toby falls in love, as well as Leo, a down-and-out sex worker, and finally a most talented Tuc Watkins plays Henry Wilcox, Walter’s wealthy Republican husband for 36 years. We were also introduced to the excellent ensemble, or something akin to a Greek chorus, whose actions and reactions contribute to this riveting play.

ACT 2: The break-up that Toby instigated between he and Eric has more positive results for Eric than for his former partner who seems embarked upon a self-destructive path. While Toby is immersed in his drug and alcohol downward spiral, while on Fire Island he encourages 19-year-old Leo to have sex with countless men in one evening. The orgies are cleverly staged in a highly-stylized suggestive format, nicely enhanced by Josh Epstein’s lighting. In the meantime, Eric convinces Henry that he would like to see the Upstate New York house and eventually he obliges him. A new character is Tantoo Cardinal’s Margaret Avery. Born in the south, she has been the housekeeper at this home that eventually welcomed hundreds of AIDS infected men who came there to die. In a touching monologue, she retells her story about she and her young son Michael, who came out of the closet. Unable to cope with his truth, she lost contact with him and it wasn’t until years later that they reunited when he contracted AIDS and came to the house where she and Walter took care of him until he died at age 25. Margaret remains guilt ridden that so many years were lost but consoles herself that she was devoted to him during the last year of his life. Subsequently, along with Walter, she looked after hundreds of men stricken with this deadly disease. This is a tearful moment in the play as this excellent actor tells her story. In a lighter moment one of the characters quips, “Hell is better than South Carolina.” In the meantime, Eric is not happy with his husband Henry who makes it very clear that he is not interested in any physical intimacy but assures Eric that he’s free to find fulfillment outside of the marriage. This is in sharp contrast with when Henry happily proposed saying, “You are the author of my recent smiles.” There are poignant moments such as when two actors play the young Henry and Walter meeting for the first time and how they immediately embraced each other. Walter eventually took up residence in his husband’s townhouse in the West Village, subsequently moving into the same building as Toby and Eric which is how Eric and Walter become friends, eventually leading to meeting Henry. Eric’s new, older friend shares, “I learned how to f…ck when I was 14, but never knew what love was,” adding, “To fall in love is to have heartbreak.” There are delicious one-liners such as Henry defending being a Republican. “Why shouldn’t I be a Republican?” “Because you’re gay!” This act is an outlet for opinions and discussions of myriad pressing social and political issues affecting the gay community and was well within the context of the action. Why not touch on subjects germane to their continued survival. Filled with remorse over breaking up with Eric, Toby pleads with him to take him back but at this point, he is in love with Henry and is about to get married. Eventually, Eric, despite never having to worry about money again, is unhappy with the sexless marriage and wants out. After visiting the White Plains house again, Eric has an epiphany and wants to turn the house, where so many men died, into a place where men could continue living. Still in a self-destructive spiral, but trying to find his way out, Toby heads home to Alabama where he remembers being called a faggot in school but didn’t even know what that meant. Getting clearheaded, and understanding his inability to receive and give love, he resolves to write a truly autobiographical play which upon completion, his agent thinks is kind of long. (An in-joke reference to the length of “The Inheritance.”) Ready to sign the divorce papers, Eric asks his soon to be his “Ex” to please give him the house and as in “Howards End,” the property reverts back to the one for whom it was originally intended.

Do bear in mind that despite the theatrical exploration of heavy subjects López illuminates, his exquisite writing is sprinkled both with pathos and laughter throughout the play, especially following a particularly heavy scene so there is timely comic relief. Sometimes your tears are ready to fall but comic relief saves you from digging out those tissues.