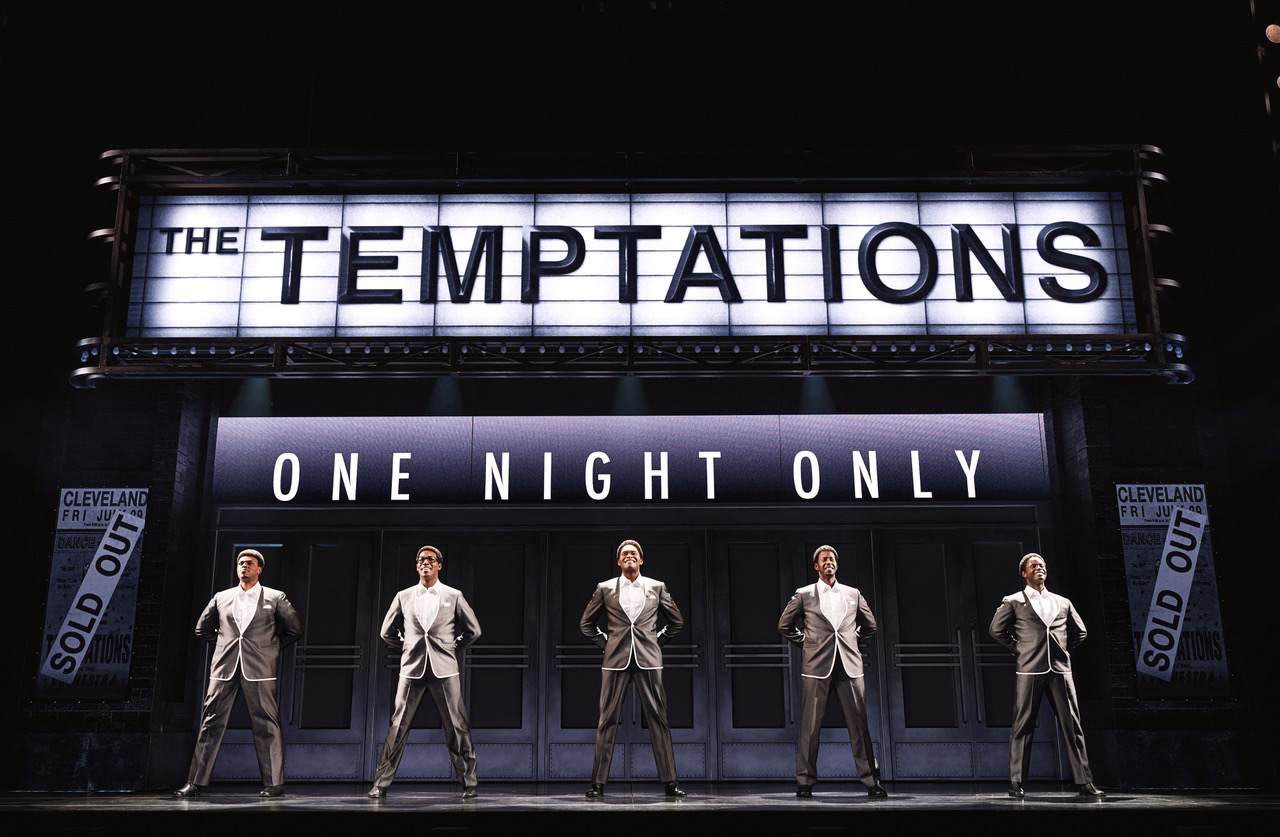 At approximately 8:00 pm on Thursday, December 15th, the curtain went up on opening night of “Ain’t Too Proud – The Life And Times of the Temptations. ” The audience applauded wildly – yelled, stomped, and whistled. And, that was before one note was played. It was as if they knew they were about to experience an extraordinary theatrical event that transcended a typical opening and morphed into a happening. With book by Morisseau based on “The Temptations” by Otis Williams with Patricia Romanowski, and music and lyrics from The Legendary Motown Catalog, the high-octane opening song and dance number, brilliantly choreographed by Sergio Trujillo, informed us that Des McAnuff’s masterful direction would guide the production to reach extraordinary heights in telling the almost fairytale story of “The Temptations” through their music and the highly energetic, high voltage dance sequences.

With a video backdrop of Detroit, the story begins in that city where the young Otis Williams, gorgeously played by Marcus Paul James, whose singing and dancing is nothing less than extraordinary. Growing up in the projects, he is 16 years old and has been in a juvenile facility for six months for stealing. Standing before judge, he is admonished, “I don’t ever see you back here again,” to which the polite young man answers, “Don’t worry your honor, you’ll never see me again.” And he never did see him again in that context. As was common back then, he and his musical friends, Paul Williams (James T. Lane,) Melvin Franklin (Harrell Holmes Jr,) Eddie Kendricks (Jalen Harris) and eventually David Ruffin (Elijah Ahmad Lewis) liked to hang out either in front of their building or on the street and harmonize. That would become their signature sound. I’m sure in their wildest imaginations they couldn’t conceive of what lay ahead for them; that with their unique sound and stylistic high-energy dance moves, extraordinarily executed by the uber talented actors playing the principal roles, that they would become the greatest R&B group of all time and that their career would span 55 years, enjoying 42 Top Ten Hits, 14 #1 songs, three Grammys, induction into the Rock & Roll Hall of Fame and ultimately with 24 different group members. When they started out, the two popular Motown groups were “The Cadillacs” and “The Elgins” and Otis decides that he wants to form a group and sing and dance. We get to meet the legendary Berry Gordy, nicely played by Michael Andreaus. He is in the bathroom with his back to the audience, standing in front of a urinal. He is not happy with “The Elgins” and wants a stronger group. In the meantime, Otis has formed his group and gets a meeting with Mr. Gordy who signs “The Temptations” and assigns Smokey Robinson to guide them. Nicely played Lawrence Dandridge, under Smokey’s direction, they soon become the opening act for other popular Motown groups such as “The Contours” and the “The Velvelettes. At about this time, David Ruffin joins the group and while incredibly talented, eventually becomes a problem because of his use of drugs and lack of discipline. “The Temptations” are pretty much on the road constantly, going from city to city performing to sold out audiences. They sometimes appear on bills with “The Supremes” where some of the most exciting numbers of the evening are performed. Peter Nigrini’s Projection Design, illuminates the various cities and venues in which the group performs as well as depicting the civil unrest, including the riots in Detroit and the assassination of Martin Luther King, Jr. Despite their fame, their bus is fired upon in the south with nasty racial epitaphs shouted at them by white nationalists. There is occasional drug use which Otis puts a stop to and the group sadly loses Eddie to lung cancer. Enjoying success, Otis wants to write some songs of own which Gordy nixes and introduces them to their new manager – Shelly Berger, well characterized by Reed Campbell. On being introduced to him, one of group says: “He’s white and he’s Jewish.” However, Berger turns out to be wonderful for the group as under his guidance, they are now appearing on such programs as “American Bandstand” singing some of their hits including, “My Girl,” “Just My Imagination (Running Away With Me,)” “I Can’t Get Next to You,” “Papa Was a Rollin’ Stone.” They play to sold-out venues from Montreal to Paris and score a NBC Special. Amid the growing success of “The Temptations,” Otis falls in love with Josephine, wonderfully acted and sung by Najah Hetsberger. Eventually they marry and have a son named Lamont, played by Gregory Carl Banks, Jr. However, because of the time Otis spends on the road, cracks begin to develop in their marriage and her affections turn elsewhere. One very amusing scene is in the recording studio where one of the Temps doesn’t want to sing “Papa Was a Rollin’ Stone.” He thinks it’s a stupid song and doesn’t like the opening line, which refers to the third of September, his daddy’s birthday. So during the session, being quite annoyed he deliberately spits out the first two lines. Once they realize the song is going to be a big hit, his demeanor changes from “ho hum” to wild enthusiasm. The story of “The Temptations,” told through McAnuff’s sharp direction of this talented cast, along with choreographer Trujillo’s exquisite almost militaristic, super charged dance numbers, Ain’t Too Proud” is an unforgettable theatrical experience.

Along with the rest of the production team, which consists of Robert Brill’s Scenic Design, Howell Binkley’s Lighting, Paul Tazewell’s costumes, Steve Canyon Kennedy’s Sound, and Harold Wheeler’s Orchestrations and Music Supervision, and Arrangements by Kenny Seymour, I’d like to give a shout-out to the other members of this cast, each of whom contribute to this magnificent tapestry of sight and sound.