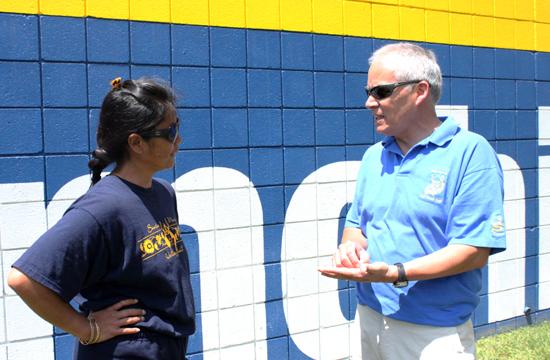 Fall sports are right around the corner at Santa Monica High School.

The spring season may have just ended, but for new Samohi Athletic Director Daniel Escalera, there is no time to waste when it comes to preparing for fall sports.

Escalera, who was named AD June 18, will begin working on Monday, after a week-long furlough at Samohi ends. But he’s already busy.

He’s met – and will continue to meet with – coaches and boosters, teachers and parents, administrators and community members. These are the people he will work with and rely on when fall comes and high school sports get into full swing. Escalera is thinking ahead.

“I’m getting excited about getting the fall sports kicked off,” he said. “The other excitement, of course, is welcoming the freshmen.”

Escalera brings a blend of education and athletic experience that makes him ideal for the job. He has been a teacher at Samohi since 1987, he most recently taught social studies, immersion and AVID courses. Prior to that, he taught at Loyola and St. Monica’s. He was the head football coach at Samohi from 1993 to 1997, and also coached football at several other area schools as well as at the college level.

For Escalera, the move will mean stepping out of teaching and into an administrative position.

“It’s bitter sweet, because you get pulled out of the classroom,” he said. “But to be surrounded by such a great group of coaches that are committed to the kids and produce at such a high level, it’s an honor.”

His objective for his tenure as athletic director is simple. Executing it is the challenging part.

“There is a rich tradition of success at Santa Monica, so the long term goal would be to find some way to build on it,” he said. “[I want to] try to maintain the momentum (of this year’s successes) and build on it at the same time.”

To do that, he said the key will be maintaining the stability and consistency of the athletic program at Samohi by finding ways to “make it easier for teams to play and coaches to coach.”

However, as a former teacher, Escalera is quick to impress the importance of academics, and the insight into students’ lives that more than twenty years of teaching has provided.

He said there is a wonderful diversity of backgrounds in the Samohi students, and that needs to be recognized when it comes to how to work with students – and student athletes.

“Each student comes with a different set of needs,” he said.

He emphasized how he wants the athletic department to help students academically. He added that it helps that many Samohi coaches are also teachers who share his mentality.

For now, however there will not be any major changes. Escalera wants to build on the athletic successes of the past year by keeping things running smoothly.

“It will be business as usual,” he said. “But at the same time with my own twist on it, with how to improve their [the students’] success in the classroom, not just in the field.”