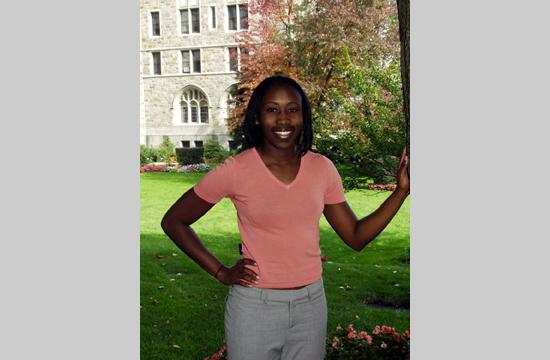 The coming season of girls basketball at Crossroads will not be a rebuilding year, so much as a building year.

And new coach Christine Smith is ready to begin construction.

Smith, a 2002 Crossroads graduate, will take up the reigns as head coach for the 2010-11 season. She replaces Malek Abdul-Mansour, whom she worked with as an assistant coach last year, when the team finished 13-9 over all, and 5-5 in league play.

Smith’s goals are no less than a championship team, but she said there is a lot to do before that dream becomes a reality.

“I definitely think we have some work in store for us,” Smith said. “It [winning a title] is something that’s more of a longer term goal.”

Smith played basketball for four years at Crossroads before heading to Boston College, where she also played four years. After college, she coached at the middle school level before becoming the Crossroads assistant coach.

Now as head coach, she has a clear vision of what she wants to do with the team and how she wants to get there.

“I think there is an element of cohesiveness and discipline and focus missing,” Smith said.

She said team building will be the main focus this year, and that cohesiveness and camaraderie will be essential to the team’s success. She plans to develop an environment where the girls have to work hard and rely on each other to instill a sense of team within them.

Smith said she also hopes that spending more time together off the court will allow the team to get to know each other – and her. And she believes she has an advantage being a Crossroads alumnus.

“I think its going to work to my favor because I can identify with the girls that play there now,” she said.

On top of building a team, Smith said she hopes to build on the foundation of young players, who she said have a lot of raw talent and athleticism “that needs to be fine-tuned.”

To help shape the young players, Smith said she is looking for senior Nadine Byers to step into a leadership role.

Smith is ready to build the team, but she doesn’t discount the long road ahead, nor her team’s potential for greatness.

“We’re building into something that could potentially be a championship team, but it’s going to take a lot of work.”