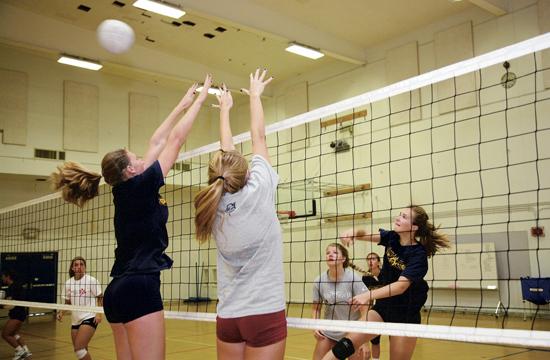 Teamwork is essential in sports and so it is appropriate that the project of sending the Santa Monica High School girls’ volleyball team to a tournament in Hawaii is a team effort between the girls, their coach, and a volleyball mom who is raising money to fund the team’s trip.

The tournament is the 28th annual Ann Kang Varsity Invitational, a meet of 16 girls’ teams that will play August 11-18 at Iolani High School in Oahu. Four teams from California are competing, including Samohi.

“We were over there in March for the boys’ volleyball team,” said Samohi girls’ volleyball coach Liane Sato. “I asked and [found out] that they had a girls’ tournament. There was an opening and they sent us an invite.”

With only 16 teams involved and a “high level of competition,” Sato admits that her team was “very lucky” to have been invited.

“We have a year of experience under our belts.” Sato continues. Some members are going into their second year on the team and others just beginning. “We made it to the third round and lost in the CIF playoffs last year-we hope to do better this year.” Sato is teaching her girls that their goals include winning their league and qualifying for the playoffs through “hard work and determination.”

Tess Walther, is a samohi senior who is going into her third year of varsity play, and sophomore Jordan Levy is a sophomore who joined the volleyball team this July said they are “very excited” to be going to Hawaii.

“It’s amazing,” says Walther. “I love volleyball so much. I love everybody on the team-we’re really close. And getting to the third round was fun.”

Levy admits that she never played on a team before this one, except for some just-for-fun play at the beach. “I just tried out and made it.” Like Walther, her brother plays on the Samohi boys’ team.

Teams can do their own fundraising, taking advantage of a group package if they can generate $400 per person. That’s where Janine Hayes came on to the court, with a way to raise the needed funds.

“My daughter Joslyn being on the team, I offered to do a benefit for Santa Monica High School,” says Hayes. “We’re bringing in top comedians [who have worked on] Comedy Central, Comics Unleashed, MTV, and Girls Behaving Badly, to raise money for the girl’s volleyball team to go to the tournament.”

The benefit will be held July 28, at 8 p.m. in Barnum Hall on the Samohi campus. Scheduled comics include Curtis Fortier, Janine Hayes, and others to be announced. Tickets are $10 in advance, $15 at the door. “Donations are welcome,” adds Hayes.