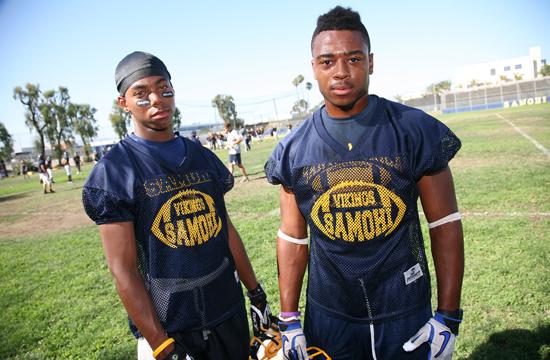 Samohi football team took the field in pads for the first time in practice on Tuesday. Amidst all the drills and the clashes of helmets, the most visibly excited person on the field was head coach Travis Clark. There is good reason for that.

In his office, with a framed photo of his late mentor and former Samohi Athletic Director Norm Lacy overlooking Clark’s desk, he said he is still dealing with Lacy’s sudden death. Naturally, with success on the field being as good a form of tribute as any, the second year coach expects his team to improve on last season’s 4-7 mark and contend for an Ocean League title.

He couldn’t be more literal, as the team has a returning offensive line to make room for, running backs Kori Garcia and Brandon Taylor, both of whom also play on defense. Senior receiver Kris Comas, who missed most of last season due to a groin injury, will also be a receiving target replacing first-team All-Conference performer Mike Smith, who is at Kansas Wesleyan and was one of the team’s best players, Clark said.

Who will throw to Comas and Taylor remains to be determined. At the quarterback position, three – possibly four – players are competing for the starting job. Senior Brock Miller, junior Christian Salem and a transfer from Washington state, Rhys Gervais – the brother of Santa Monica College player Dulton Gervais – are all competing to be first on the depth chart.

Clark hasn’t ruled out using all of them – and perhaps even a fourth player, which he didn’t identify – as signal callers. Miller is “more linebacker playing quarterback” while Salem and Gervais are more pro-style, drop back quarterbacks, according to the coach, who added, “I could see two or three playing, whatever it takes to win.”

Quarterback isn’t the only key position with competition. At kicker, three players are also being considered. “It’s definitely a point of interest,” Clark said, especially because “we dropped a couple of games in terms of missed field goals and PATs” last season. He has brought on assistant coach Frank Capella to work with the kickers.

On defense, the Vikings bring back experience and size. Cornerbacks Dylan Muscat and Kori Garcia return, while Donovan Citrowski is back at the linebacker spot as is Justin Coker at middle linebacker. An intimidating new addition to the Vikings is 6-foot-5, 242-pound junior Chad Wheeler. Also joining the squad on defense is 6-foot-5 junior Charles Schmidt, a varsity volleyball player who Clark looks to start at defensive end.

Taylor said he is focused on the Leuzinger game on Sept. 10 and the season’s fourth game, against Valencia at Santa Monica College. The Leuzinger game has special significance because it was during that game two seasons ago that Cody Williams fractured his spine. Valencia, on the other hand, handed the Vikings a 60-7 defeat last year.

“We got leaders this year, we [are] about to step up,” Taylor said. “ We got our defense, our linebacker corps is getting nice, [and the] defensive line is getting better. The offense is explosive.”

Lineman Evan Parra-Raygosa expects the same and is ready for game day.

“We’re going to have a great running game,” Parra-Raygosa said. “I mean our whole offensive line is starting seniors. When Friday night lights come on, it’s going to be great.”