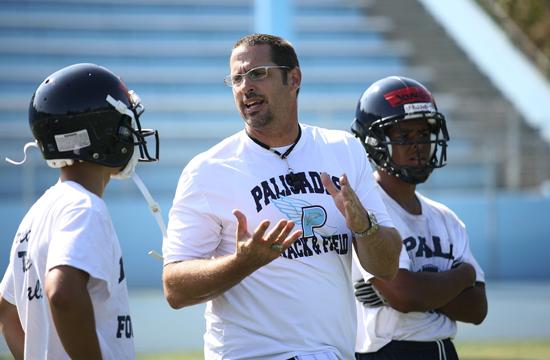 Palisades High School football had a woeful 2009-10 season. Winning just one game en route to a 1-9 record, the Dolphins were the City Section’s Western League doormat.

Going into the upcoming season, however, there is some hope that football fortunes will be reversed. New coach Perry Jones, who spent last season – his first – as varsity defensive coordinator, takes over the team from Kelly Loftus. He knows turning things around won’t be easy.

“It’s going to be a rebuilding year,” Jones said.

The Dolphins have practiced for nearly two weeks and Jones said the players and the staff are getting on the same page. “The kids are getting to know me, that’s kind of the overall deal,” he said.

Last season the Dolphins relied on a spread offense, but this year, “it’s probable that we’re not going to spread,” he said. Jones emphasized that on offense the Dolphins need to “control the ball a little more,” meaning senior running back Malcolm Creer will get more carries and become the focus. At quarterback, the Dolphins have returning senior Branden Sannet.

The team also returns linemen Roman Thomas and Marquis Shakir. No position is guaranteed, however, as “we’re trying to get competition at all spots,” Jones said.

The Dolphins play El Camino Real Sept. 10 in the season-opener at Pierce College in Woodland Hills before taking on Samohi in Santa Monica on Sept. 17. Both games kick off at 7 p.m.