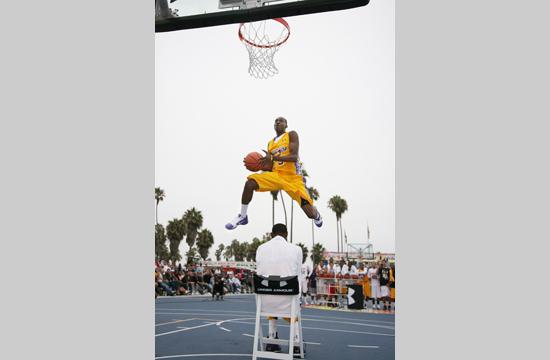 With four NBA players, among them the reigning Rookie of the Year and the number one overall draft pick, looking on, Quddus “Deuce” Bello lobbed the ball off the backboard, ran up to the rim, threw it between the legs and emphatically stuffed it through the hoop.

Before Bello managed to gather himself, Washington Wizards’ John Wall was already in his face, slapping fives and bumping chests. Bello, a shooting guard from Westchester Country Day School in Winston-Salem, N.C., had just won the Under Armour Slam Dunk Contest at the 2010 ESPN RISE Boost Mobile Elite 24 event.

Bello’s was but one of many jaw-dropping dunks during the contest, held Friday at the Venice Beach Courts as part of the Elite 24 festivities, which brought together two dozen of the nation’s top high school basketball players for scrimmages, a dunk contest and a ESPNU-televised game. Wall, the Wizards’ top pick in June’s NBA draft, was joined by Milwaukee Bucks’ Brandon Jennings, Sacramento Kings’ Tyreke Evans and Toronto Raptors’ and former USC Trojan DeMar Derozan as the dunk contest judges.

“There’s a lot of great talented guys out here,” Wall said after the dunk contest wrapped.

Talent was omnipresent. Boston Celtics head coach Doc Rivers was in the audience, as was former Olympic sprinter Maurice Greene. Rivers was on hand on to support his son, point guard Austin Rivers from Winter Park High School in Florida.

“I was born out here in Santa Monica, but I haven’t been back in a while,” the younger Rivers said. “It feels lovely to be back out here.” Rivers tallied 15 points and five rebounds in Saturday night’s game.

Woodland Hills’ Taft High was well represented at this year’s Elite 24, which is in its fifth year and usually takes place at New York’s famed Rucker Park. Taft forward DeAndre Daniels was among the Elite 24, while teammate Stephen Garrett was a surprise participant in the dunk contest and Taft coach Derrick Taylor helmed the Marques Johnson Squad, which lost to the Raymond Lewis Squad on Saturday night, 128-131.

“It feels good to [be out here],” said Daniels, who is looking to attend IMG Academy in Florida before deciding whether to pursue a college career or other options. “I have all my friends and family to cheer me on.”

Rivers shared his thoughts on how Venice Beach differs from Rucker.