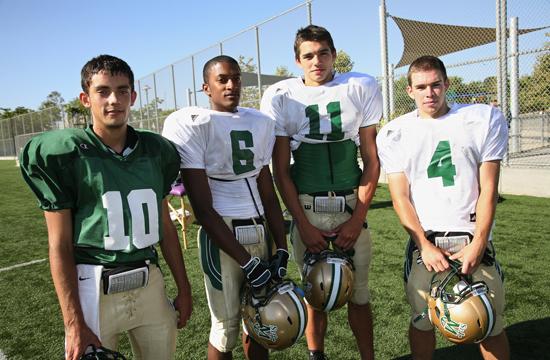 With a core of three senior receivers and a returning quarterback, St. Monica football coach Larry Muno believes the Mariners’ offense is ready to improve on last year’s 3-6 season.

Jamal Young, Kyle Farber, and Sam Holguin are the receiver trio that Muno aims to connect with senior quarterback Matthew Partyka, who accounted for more than 2,300 passing yards and 20 touchdowns last season.

“We should be pretty good,” Muno said. “I’d put our first team against anybody.”

At practice on Tuesday at Airport Park, Partyka said he has been focused on turning the ball over less.

As is often the case at St. Monica, the Mariners only have 22 players on the roster, which means that one or more injuries can devastate the team, Muno said. At quarterback, especially, the team is thin.

“It’s kind of exciting,” Partyka said of the fact the he’s the team’s go-to quarterback. “I go out there and play my hardest, I don’t play safe or anything. It worked well last year. In practice, I’m not really in contact that much.”

The Mariner defense is coming around as well. With several new linemen joining the team, Muno said the defense should be better. Senior safety Holguin, the tallest player on the team at 6-foot-3, is in his fourth year with the team and is the defensive leader.

Farber, who will line up as a kick returner with Young, said he feels prepared for the reason ahead.

“I think we’re ready for the season,” he said. “There’s a lot more chemistry.”

The Mariners open the season at Animo Leadership on Sept. 4.