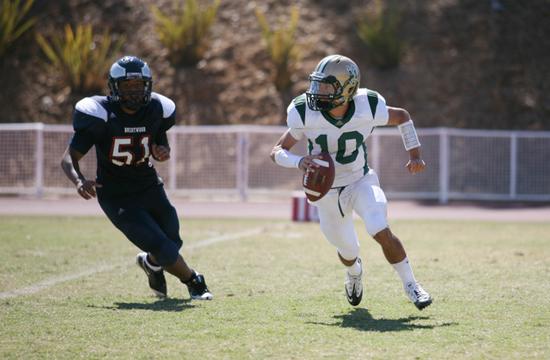 There are bad days and then there are really bad days.

The Mariners (2-2) gave up a touchdown with seconds left in the second quarter and trailed 19-12 at halftime before the offense began turning the ball over repeatedly. Brentwood’s Matt Halper intercepted Partyka early in the third, which set up a 7-yard touchdown pass to Brentwood’s Garrett Swanky with about five minutes left in the quarter. Brentwood’s wide receiver/defensive back Greg Oliva then returned a St. Monica punt for touchdown as the Eagles put the game out of reach.

“I threw some bad calls and their secondary was pretty solid,” Partyka said. “Nothing was really wide open. [We made] just a lot of mistakes mentally and technically.”

Mariners defense made a stand late in the third, with several big hits on Brentwood’s receivers that stifled their drives and forced punts. But Brentwood sacked Partyka deep in the Mariner territory and the Mariners also turned the ball over on several possessions.

Partyka was intercepted twice in the fourth quarter before completing long passes to senior wide receiver Sam Holguin and running back Sean Martinez that set up running back Sia’anga Moala’s short run for touchdown with one-and-half minute left in the game. The point-after attempt was unsuccessful.

Holguin pulled his hamstring on the series and Martinez had an ankle sprain. Muno said it was too early to tell whether either would play next week.

Brentwood head coach Patrick Brown said the team was prepared for Partyka, who poses a threat with his running ability.

“We were concerned about him because he’s such a good runner,” Brown said, adding that St. Monica was “the most physical team we’ve played this year.”

The game began at 1 p.m. on Saturday with temperature soaring into the high 90s, which Brown conceded may have been “our advantage because we are used to playing day games.”

Next Saturday, Brentwood next faces Kilpatrick at home while St. Monica travels to Pasadena to face Blair High School.