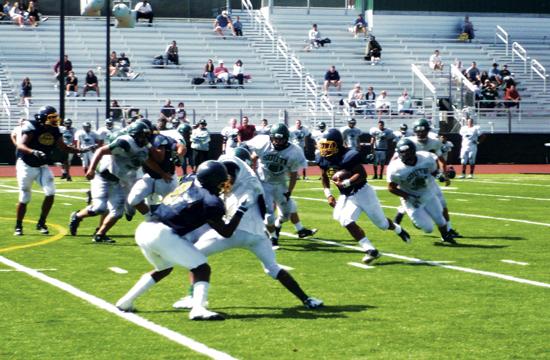 In the first and only warm up for their season opener, Samohi football headed to South Torrance High, where receiver Kris Comas and running back-slash-receiver Kori Garcia showed they were ready to carry the team on their back.

The Vikings defense wasn’t so spectacular at the beginning of the scrimmage. During the first series – the scrimmage consists of both teams starting at the 30-yard line and running about 10 plays – South Torrance managed to get into the end zone several times. The Vikings gave up a rushing and passing touchdowns.

“I was disappointed our defense gave up a lot of chunk of yards early,” head coach Travis Clark said. “I didn’t like the way they started.”

The Vikings’ offense was the exact opposite. Senior quarterback Brock Miller zipped a 30-yard pass to Comas, who grabbed it with one hand for a touchdown. Garcia was a force in the backfield and also on defense, where he broke up several plays.

Vikings’ junior quarterback Christian Salem may have perhaps taken himself out of the running for the starting job with his inconsistent play. On his first set, he threw a wobbly, incomplete pass before connecting with receiver Dylan Muscat on a short pass. Then, he threw an interception. He rebounded by throwing a 30-yard touchdown pass to Comas and then another to Muscat.

The ball was snapped too high on sophomore quarterback Rhys Gervais, but he caught and completed a short pass. The next several plays found him connecting with Comas and showing that he’s not afraid to get out of the pocket and scramble. Gervais also found receiver Anthony Hernandez for a long pass that led to a touchdown.

Still, no quarterback swayed Clark into naming a starter.

“It’s not going to be based on this game but it will be based on the complete off-season situation,” Clark said. “ I know all three of them did some great things today. I really like the way they came out today.”