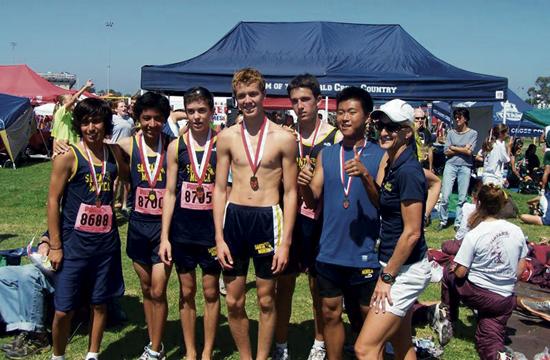 The roster was determined by the performances at the Seaside Invitational in Ventura and the Woodbridge Invitational in Irvine. The boys and girls varsity teams each have seven runners and three alternates.

“I have three freshmen who will be on the varsity,” Fischer said. “That’s why cross country is kind of unique. You go by time and performance. It’s open to whoever is working hard and performs well. It’s pretty clear cut.”

The three freshmen are on the girl’s team: Tati Bedi, Brooke Weiss and Rachel Kiekhofer. The trio is helping “raise the bar,” Fischer said, because their performances “make our sophomores, juniors and seniors work harder.”

Fischer said that seniors Amanda Botseld and Nick Salazar would be named captains.

“There’s two girls that really stepped it up,” Fischer said of the performances at the Woodbridge Invitational, which had 50-plus teams. “[Bedhi] improved by two minutes. She’s really consistent. Her time for three miles was 20:56 and the other girl that ran well, Emily Berkin, [posted] 19:54 and was in second place. As a team, the sophomore girls got third. My freshman girls, as a team, were in fifth place.”

Salazar finished the Woodbridge race in 16:45, followed by Arash Assar in 16:54 and Andrew Capron in 17:05. Cumulatively, their times were good enough for a respectable 11th place at Woodbridge.

“There’s a little strategy, where you want to keep your top five together if possible,” Fisher said. “The closer they are together, the better. You want to run the weaker runner with the stronger runner.”

It’s “one of the more challenging courses,” Fischer said,” and includes what she calls a ‘suicide hill,’ a steep hill that will factor in in slower times for the runners.