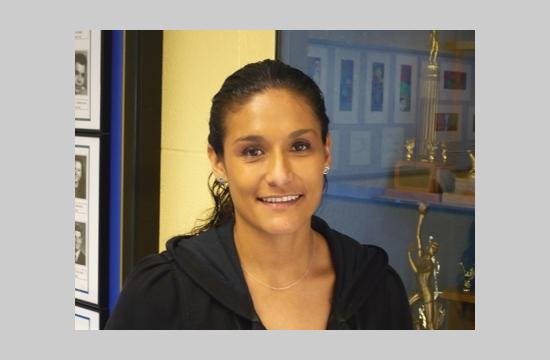 “I just met the girls today and I know they were league champions the past few years,” Adame said. “I’ve looked online a bit and looked at their batting averages. I’ll get to know them and we’ll see how it goes.”

Adame said it is a bit intimidating to step in Skaggs’ shoes, and she’s looking forward to meeting with her to pick up some pointers.

Samohi Athletic Director Daniel Escalera said Adame was chosen from a pool of about 12 applicants and what stood out about her to the search committee is her record of success as well her ability to teach.

“She was highly successful at Clovis West and she played at UC Santa Barbara and was very successful there as well,” Escalera said. “Everything that the girls are going through she’s been through.”

Adame, a Hollywood resident, is an avid soccer player – “I’ve played soccer and softball forever,” she said – and recently has been an instructor at various private schools on the Westside and at some Los Angeles Unified schools.

“I’ve been coaching since I was in high school,” she said. “In college, we did our camps. It was something I enjoyed doing and it’s fun being outside with the kids. I’ve had the experience of playing at the elite levels.”

With Adame’s hiring, Samohi’s athletic department has a full staff.

“We’re excited, real excited,” Escalera said. For the softball team, “it’s a transition and yet the players will ultimately drive the program.”