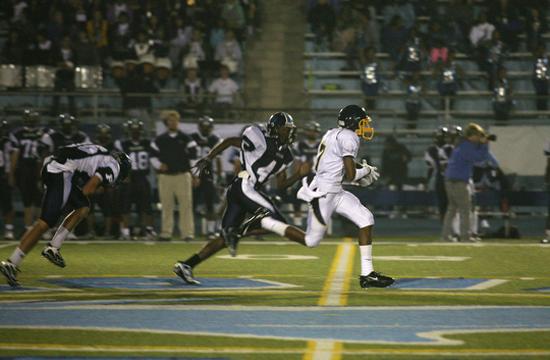 Samohi receiver Kris Comas had four touchdowns as Santa Monica High School dominated Palisades on Sept 16 at the Stadium by the Sea, 42-20.

Although the score would indicate otherwise, the game wasn’t a contest as the Vikings (2-0) scored on their first three possessions. In an even offensive attack on the first drive, Vikings quarterback Brock Miller completed passes to receiver Dylan Muscat and running back Kori Garcia, who scored the first touchdown just minutes into the first quarter. Miller found Comas in the end zone on the next drive and connected with him again as the Vikings took a 21-0 lead into halftime.

The second half was a somewhat different story, as Samohi head coach Travis Clark had some stern words for his players.

“I’m happy for the half, but I’m really disappointed for the rest of the game,” Clark said. “This is not how you finish. That team, with time on the clock, could come back and beat us… There is a lot of stuff I got to curb. I got a lot of selfish-mentality: people wanting the ball, wanting to score, worrying about the paper and stats, it got personal – a lot of guys started pouting.

“They’ve got to understand how to be motivated for the individual accolades but also within the team,” Clark said later.

In the second half, Palisades (0-2) scored early in the third quarter, and Vikings had several penalties on false starts. But, the Vikings put the game away as Comas caught another touchdown from Miller with 4:32 left in the third and the Vikings defense had an interception that set up another Comas touchdown early in the fourth.

Clark inserted sophomore quarterback Rhys Gervais with the Vikings up 28-7 in the third quarter and Gervais completed 3 of 6 passes for 102 yards and a touchdown to Comas.

“I wanted to give him an opportunity when it counted,” Clark said. “The game wasn’t over. I wanted to see how he was going to respond, we had a little bit of a cushion, so it was a great opportunity to get him in. It wasn’t because of Brock’s interception at all, Brock played well. Right now, Brock is my guy. I wanted to give it to the sophomore in this situation, just to get the jitters out, because you never know, you may need that guy later on.”

Clark gushed about Palisades, a longtime Samohi rival, after the contest was over.

“They do not quit,” he said. “I really respect what Coach Jones is doing over here. The vibe is changing. I think it’s great for our programs on the Westside. I can root for them now.”