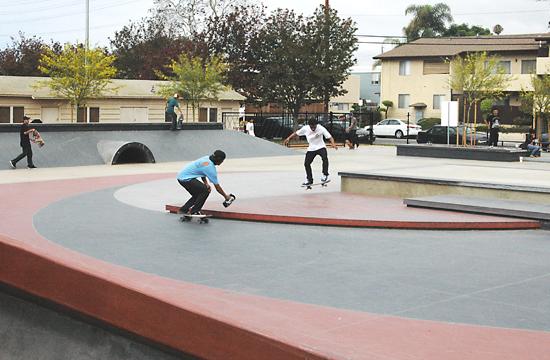 With the welcome of a new skate park this summer at the Stoner Recreation Center in West Los Angeles came the arrival of enthused skaters that have left homeowners wishing for an intermission.

The facility is nestled in a residential area bordering Santa Monica, east of Bundy Drive on Stoner Avenue. It offers a “state-of-the-art” plaza equipped with stairs, ledges, and benches ideal for street skaters. The project filled a void when another skate spot at the West L.A. Courthouse closed leaving community residents without a railing to grind.

While the park created a haven for skaters, residents are finding the noise is reaching intolerable levels. Park hours are limited from 9 a.m. to dusk, although with limited police enforcement and nonexistent sound barriers, the compatibility of skaters and residents is weaning.

Construction planners used comparative noise study from a skate park designed in an industrial area under a steel train bridge in Portland, Ore. The study does say any affect on a residential area can be avoided with physical distance and noise abatement measures.

Irwin Grossman who owns a 10-unit property at Nebraska and Stoner avenues, less than 30 yards from the park, cited complaints from tenants about the noise, along with decade-long tenants looking to now live elsewhere. He said as a property-owner he wasn’t informed of the construction and pointed out an absence of any environmental impact report.

“It’s done and they couldn’t care less,” Grossman said of City officials’ lack of noise abatement. “They have no intention of controlling any of it and that’s the bottom line right now. If we have peace and quiet after sundown most people will be able to put up with the rest of it.”

Grossman said a wall should be build at Nebraska and Stoner to aid with noise as well as completing the chain-link fence that partially encloses the park to enforce hours. He said police can still patrol the park with the partial, enclosed sound wall.

Currently without a fence, officers are able to eradicate trespassers but as soon as police cars leave skaters are able to return. A sign is the only barricade to inform after- hours skaters to keep out.

General police services are stretched across 400 parks in the City. Los Angeles Police Department Officer Matt Kirk said a sound wall would be “a billboard for the Sawtelle gang [graffiti tags],” but a fence would eliminate trespassers after hours. He said officers are told to go by in their “free time.”

Other residents attest that it is the sound during the day that leaves home windows closed and home residents up in arms.

Skaters are able to access the park at all hours of the night and LAPD has been ineffective to catch violators. Supporters or opponents are quick to refer to the conflict of wanting to have a place for youth to go and ceasing the overwhelming noise during the day.

Mindy Glazer, a 15-year resident who lives across the street on Nebraska, wants a noise abatement structure to block out the relentless sound. She noted many people use the park create “normal park noise,” including a saxophonist and bagpiper, that don’t compare to the noise of the skate boarders.

“It seems like something that just showed up,” Glazer said. “This is eye opening to me, this is public land and public money has disturbed the peace of a lot of people who have been here for a long time.”

Although Los Angeles City Council member Bill Rosendahl’s office is said to have distributed leaflets to neighbors about meetings, neither Grossman nor Glazer reported receiving notifications or hearing of anyone nearby who did.

Rosendahl was unavailable for comment on the subject at the time of print.

Unfortunately for homeowners, soundproofing was not included in the design. The park ballooned from a 14,000 square foot, $750,000 project into a second design with 20,500 square foot. According to neighborhood sources, no public comment was asked for the final $1.8 million skate park with an extra multi-use picnic area.

The other skate parks of this size created by Rob Drydek Foundation are located in rural areas, mountainous New Mexico or forested Pennsylvania. According to Rob Drydek’s website, these “plazas” are an experiment and when the experiment is perfected he plans to take the plaza idea to cities around the country.

Jay Handal, chair of the West L.A. neighborhood council, sought financial aid from Rosendahl’s office, which helped obtain the permit to build the plaza. Quimby funds financed the project, which is money allocated for creating or redesigning city parks. The park was designed with help from local skateboarder Alec Beck of the West L.A. Community of Skateboarders.

Handal has promoted a collaborative effort between City government and skaters to secure more funds to address sound, fencing to keep people out after hours, and proper signage.

Another possibility to save the plaza is to have a private sponsor support improvements for sound in the park, then residents could rest easy and skaters can continue their way of life uninterrupted.

Stoner Park neighbors created an email address, StonerParkAdj@gmail.com, for neighbors with questions, complaints or problems generated by the skate park.