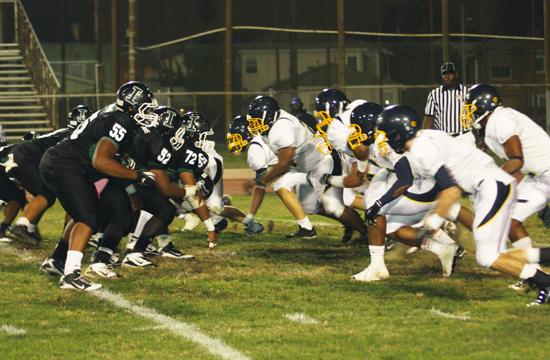 Inglewood High School football team’s size and speed proved too much for Santa Monica High School on Oct. 15, as the Sentinels beat the Vikings at Coleman Stadium, 28-7.

Although highly touted college recruits Derrick Woods and Patrick Onwuasor played well, it was Sentinels running back Kyle Evans who stole the show. Evans rushed for 142 yards on 15 carries and scored three touchdowns. Woods returned a punt for a score as well.

The Vikings (3-3; 0-1 Ocean League) were lackluster in their play through most of the game, with the exception coming in the third quarter when running back Kori Garcia put the Vikings in a scoring position with a long gain on the ground and then carried the ball into the end zone for a touchdown. The touchdown ensured Samohi against a shut-out, something that wouldn’t have sat well with Vikings head coach Travis Clark, who previously coached at Inglewood and maintains a friendly rivalry with the current coaches there.

“It’s bittersweet, because I wish the best for his program and he wishes the best for ours,” Inglewood head coach Stephen Thomas said following the game. “I wish we were in different leagues and didn’t have to compete against each other. It feels good, because I know he was gunning for me.”

The Sentinels (4-2; 1-0 Ocean League) game plan was focused around shutting down Samohi wide receiver Kris Comas, who, with 13 touchdowns on the season, is among the elite receivers statewide. Thomas counted on cornerback Andre Weddington, a newcomer to the position, to step up.

“Andre Weathington played a hell of a game and the [defensive line] was unreal tonight,” Thomas said.

Weathington had plenty of help, however, as Onwuasor was slotted at safety to ensure Comas wouldn’t get open for a pass from Samohi’s sophomore quarterback Rhys Gervais. Inglewood’s game plan worked to perfection, as Gervais was pressured most of the game and Comas never got open and caught one pass the entire night. Clark pulled Gervais out in the third quarter, but senior quarterback Brock Miller didn’t fare much better: Inglewood’s Jaswha James had three sacks while Justin Apparicio and Justin Sharp had two apiece on the Samohi quarterbacks.

Although far from bemoaning his team, Clark pointed out several issues that were behind the Vikings’ third loss of the season.

“They had great field position most of the first half but I thought we did a good job at holding them to seven points,” Clark said. “We just came out in the second half and got dominated, and that’s a little frustrating.”

Senior running back Brandon Taylor agreed that a slow start was to blame. “Overall, if we started fast, we could beat anybody.”

Taylor, who hurt his knee in the game but expects to play this week, pointed out that having Miller’s “control and leadership really helped” the team in the second half. “Our line started off slow once again, they had athletes. When I went down, we had no one was to step up.”

Taylor is among a handful of Vikings nursing injuries. Tight end Matt Schulz hurt his knee in the game, Justin Colker has a hurt shoulder and Garcia “hurt his hand and it looks serious,” Clark said. Comas has a groin strain.

Clark doesn’t regret getting Gervais the nod over Miller. At this point, it doesn’t look like there is quarterback controversy – but that’s liable to change.

“I don’t think [Gervais] was horrible … he was nervous and gun shy,” Clark said. “[Inglewood] is pretty intimidating. I think he’ll respond and get back. I think Brock and those guys are going to push him this week.”

With the game at Beverly Hills (4-2), led by tight end Greg Townsend Jr., this Oct. 22 [check smmirror.com for breaking updates on that story], Clark is looking for his team to bounce back.