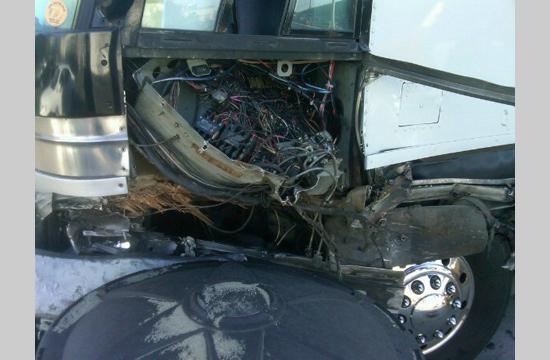 Talking about putting out fires.

When the St. Monica High School football team almost didn’t make it to Pasadena for its game against Blair Academy on Oct. 2 because its charter bus was in an accident, head coach Larry Muno, by most days a firefighter in the city of Vernon, was calm and composed. He had assistant coach Joe Cortez, a police officer by day, provide traffic control and calmed his team while recording skid marks.

The bus driver got off on the wrong exit at the 405/101 freeway interchange, and while exiting Ventura Boulevard, smashed into the divider at 40 miles per hour.

The players were shook up and some had minor injuries, although no one was taken to a hospital. Some of the bus cargo doors were jammed, however.

“We had to call the fire department to get the doors open,” Muno said.

The name of the charter bus company wasn’t immediately known. It was a different bus and driver than the one that transported the team to the Brentwood game.

Despite the accident, which happened at 4:30 p.m., the Mariners made it to the game on time and blanked Blair, 42-0, behind flawless play from senior quarterback Matt Partyka. The senior accumulated 281 yards, five touchdowns, and most importantly, had no interceptions.

The Mariners, who improved to 3-2, matching last season’s win total halfway through this season, had wide receiver and defensive back Kyle Farber back from injury. Wide receiver Sam Holguin, who had a hamstring pull in the loss at Brentwood, also played. Farber, Holguin and senior wide receiver Jamal Young all were recipients of a Partyka touchdown pass.

Further, it’s clear the team came out motivated after a lopsided 63-18 loss at Brentwood in which Partyka had a horrendous trend, throwing for five interceptions.

“We had a really good week of practice, which resulted in a really productive game plan,” Muno said. “I don’t want to go back to the Brentwood game, but I think we certainly had things not necessarily fall our way.”

Going into this week’s home game against Windward on Saturday, Muno was pleased to reach the win plateau from last year this early.

“We’re on our way certainly,” Muno said, crediting the athletic director and principal for their generosity and assistance. “We have unequivocal support from our fantastic pastor. He’s at every practice and game.”

With the bus accident in hindsight, Muno, a firefighter with the city of Vernon, explained his often stoic expression on the sideline.