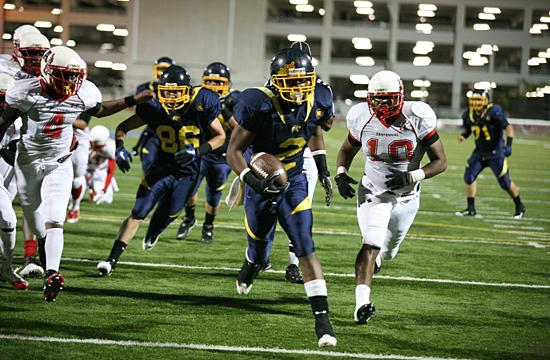 Running back Kori Garcia had his best all-around game of the season, scoring four touchdowns and recovering a fumble on Friday night at Corsair Field as his Santa Monica High School football team put away Compton Centennial 56-13.

On the night, he wasn’t the only Viking who put points up on the board. Wide receiver Kris Comas caught four touchdown passes from quarterback Rhys Gervais and running back Brandon Taylor got into the act as well, rushing for a touchdown in the first quarter.

Although the game was marred by holding calls on both teams, which stifled drives and spectacular plays, it was about the only knock on an otherwise dominant performance for Samohi.

“Other than the holding calls, it was a big game,” Gervais said. “We have five weeks until the playoffs and we’ve got to play harder and harder.”

Samohi’s defense disrupted Centennial’s passing attack almost from the start. Vikings’ linebacker Justyn Colker intercepted a Centennial pass late in the first, which set up Garcia’s first touchdown, a spectacular play on which he caught the ball, spun around the defender and raced into the end zone to put the Vikings up 14-0.

For Centennial, whose roster includes just 29 players, one of the few highlights came during a kickoff return for touchdown by in the second quarter. The score was 14-7 at that point and that was close as it got. On the next series, Samohi intercepted Centennial yet again. With under 6 minutes left in the second quarter, Gervais connected with Comas for a 19-yard touchdown.

With the win, the Vikings are 3-2 on the season. Next week they will face Inglewood High School on the road.