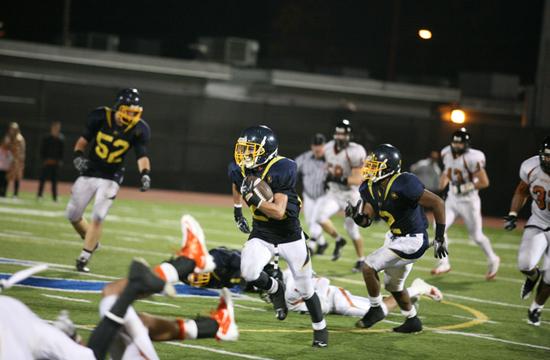 Santa Monica High School football team was one pass away from sending its homecoming game into overtime but fell just short as Beverly Hills High School held on for a 19-12 victory on Friday night at Corsair Field, sending the Vikings a 3-4 record, 0-2 in Ocean League, with three games remaining.

On the last series of the game, Vikings had possession and were in scoring position after running back Kori Garcia caught a screen pass from quarterback Rhys Gervais that put the ball on the Beverly Hills 30-yard line. Earlier, Beverly Hills fumbled in the first quarter and Samohi running back Brandon Taylor rushed for a touchdown, putting the Vikings up 6-0. Kicker Juan Pavon missed the point after attempt and would miss another in the third quarter, when Comas caught a touchdown from Gervais.

With seconds left in the game, Gervais lobbed the ball into the end zone, where it hit the turf as the time expired.

“It’s unfortunate that someone has to come out on the losing end, and tonight it was us,” Clark said.

After the final tick of the clock, the coaching staff waited outside while Samohi players gathered in the locker room to talk amongst themselves. When the players emerged, disappointment was evident. Wide receiver and cornerback Dylan Muscat was keeping at tears at bay while calling the game “our Superbowl.”

“They came out here and they wanted it more,” Muscat, a junior, said. “[You have] one time, one chance to play this game in high school and after that it’s gone. [Later, when you can] look back and tell your kids, I played my heart out. You have to be able to tell your kids that.”

Positives were hard to find even for the two players who played consistently all season and had two highlight plays in the game for Samohi: wide receiver Kris Comas and defensive back Justyn Coker.

“Technically, I don’t think I played to my full ability,” Comas said.

Coker, nursing a severely hurt shoulder, wasn’t even slated to play but did anyway. The captain anchored the team’s defensive effort.

“We were playing hard but we got to play with more heart and more discipline,” he said. “Kori gave us a chance, but we need more leaders on the team. It can’t be just three people. My shoulder is hurt but I played through the shoulder injury. I just manned up and just played.”

Beverly Hills pulled out the victory without its top player, defensive end Greg Townsend Jr., who was out with an injured jaw.

With three games left on the season, including this Friday’s game at Morningside, Samohi is looking to regroup.

“We can’t get on each other and we have to stay positive,” Muscat said. “We still can make the playoffs.”