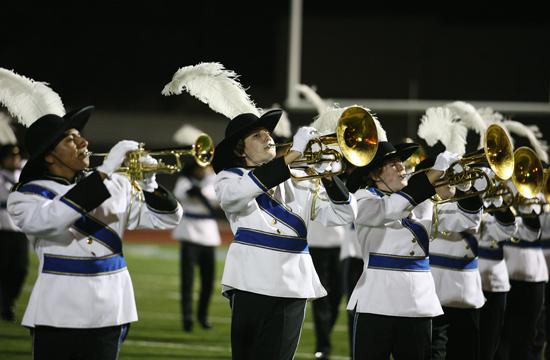 Coming off a winning season last year, Santa Monica High School marching band has added more students and is competing in a higher division. It opened the season on Oct. 9 at the West Ranch tournament at Santa Clarita Valley’s Valencia High School.

“The band was successful last year and the kids spread the word on campus,” said band director Michael Corrigan, who has been in the business of high schools bands for 41 years, his second at Samohi. “Happy kids bring in more kids. The numbers are going up and looks like we’ll be in a higher division next year.”

There are a total of six divisions based on the size of the band’s roster. Samohi is Division 4A and has 130 students, 10 more than last year when it was Division 3A, Corrigan said.

The band began practicing Aug. 23, two weeks before the rest of Samohi students (with the exception of football and other fall sports), arrived on campus from summer break. Practice ran from noon to 9 p.m. during the two-week period. When school started, the band members enrolled in a graded band class. They also practice for three hours Thursday nights. In addition to five competitions, which take place on scheduled Saturdays through Dec. 4, the band plays at the Samohi football games.

“It’s an intense few months and the kids obviously enjoy it because they numbers keep going up,” Corrigan said.

Samohi senior Taylor Weary, the band’s president, has played a marching band version of the French horn all four years at the school. She calls the competitions “cutthroat” and in addition to play her instrument, she’s in the color guard. “It’s grace and athleticism,” she said. “You get a workout and it’s fun.”

The drum major, or the conductor, of this year’s Samohi band is Scott Operman

“I tried out at the end of my sophomore year and they made me do some major routines and conducting, then put me through an interview process,” he said. “These people become your family. You go into your first show and it’s ‘bang… We call it ‘impact.”

The prospect of competing against 16 other high school bands in front of a dozen judges doesn’t phase Operman, who dreams of playing professionally at the Walt Disney Hall with the LA Philharmonic.

“Last season we went out there and won everything in our competition,” he said. “This year we’re going out in harder competition. Our goal is not to win but to get the most of out it.”